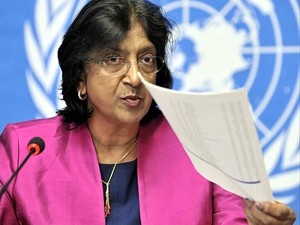 September 25, 2013
The UN High Commissioner for Human Rights Navi Pillay today set a deadline for the government to address human rights concerns by March 2014 in the absence of which she believes the international community will have a duty to establish its own inquiry mechanisms.
In a statement on Sri Lanka, which was delivered to the UN Human Rights Council by the Deputy High Commissioner Flavia Pansieri, Pillay said that she has not detected any new or comprehensive effort to independently or credibly investigate the allegations which have been of concern to the Human Rights Council.

“She encourages the Government to use the time between now and March 2014 to engage in a credible national process with tangible results, including the successful prosecution of individual perpetrators, in the absence of which she believes the international community will have a duty to establish its own inquiry mechanisms,” the statement said.

[1]   A/HRC/22/38 http://daccess-dds-ny.un.org/doc/UNDOC/GEN/G13/109/26/PDF/G1310926.pdf?
OpenElement
[2]   The Government has also invited the Special Rapporteur on education, but dates have yet to be settled.
[3]   Joint Statement, 26 May 2009:  Human Rights Council Special Session resolution A/HRC/s-11/L.1/Rev.2,  paragraphs 10 and 11
[4]   A recent UNHCR baseline survey has been cited by the Government as providing a favourable assessment of the outlook of IDPs on a number of issues including the presence of the military and safety and security. But according to the same report, almost 30% of tthose interviewed responded negatively when asked how they felt about the military presence,  with the highest levels of negative response in Kilinochchi (51%) and Mullaitivu (37%) districts. Furthermore, 57% reported that military installations or posts were less than one mile away from their homes and 87% of respondents reported that the military ‘registered’ their family at least once, in addition to civilian government registration. Almost 30% of respondents highlighted that the military visited (sometimes repeatedly) their households for reasons other than registration, all of which points to the high level of military presence and intrusion in civilian life.
[5]   In resolution A/HRC/22/L.1/Rev.1, the Human Rights Council expressed concern at the “continuing reports of violations of human rights in Sri Lanka, including enforced disappearances, extrajudicial killings, torture and violations of the rights to freedom of expression, association and peaceful assembly, as well as intimidation of and reprisals against human rights defenders, members of civil society and journalists, threats to judicial independence and the rule of law, and discrimination on the basis of religion or belief.”
Share
Facebook
Twitter
WhatsApp
Pinterest
Email