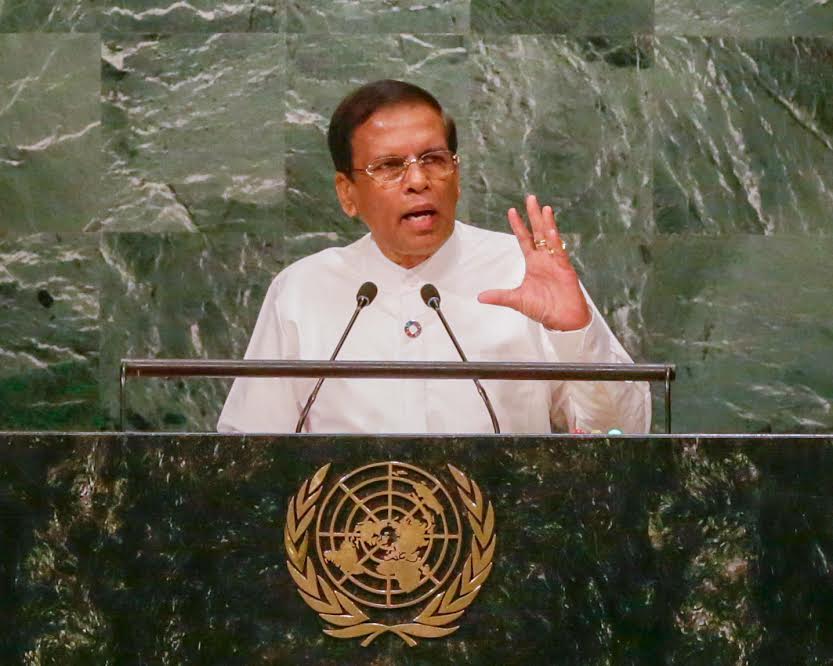 ( 25 Sep 2017 Geneva) The term ‘painfully slow progress’ has become a standard descriptor for Sri Lanka’s overall pace of implementation of UNHRC resolution A/HRC/30/1  in Geneva. It has been two years since Sri Lanka cosponsored the resolution “Promoting democracy, accountability and human rights in Sri Lanka” pledging in the meantime to implement a comprehensive Transitional Justice (TJ) process. Sri Lanka’s Foreign Minister at the time, Mangala Samaraweera even engaged with hardline Tamil diaspora representatives and other groups at a side event held at the Palais des Nations. The pledges made so eloquently then by Samaraweera remain in the air today.

The wave of hope this Government seemed to inspire when first elected into power seems to be gone. Frustration and complaints are taking over both the formal and informal discussions at the UN Human Rights Council. Though in general there remains a soft corner for Sri Lanka, due to its readiness to be accountable and democratic, this goodwill seems to be eroding.

At the ongoing 36th session there is no agenda item on Sri Lanka. But in the first few days, a number of countries have already referred to Sri Lanka’s human rights situation following the strong statement made by High Commissioner Zeid Ra’ad Al Hussein.

High Commissioner Zeid’s indirect warning during his opening statement to the effect that ‘the absence of credible action in Sri Lanka to ensure accountability for alleged violations of international human rights law and international humanitarian law makes the exercise of universal jurisdiction even more necessary,’ shows the level of frustration.  The High Commissioner also called for a time bound action plan for the implementation of transitional justice process in Sri Lanka.

The main movers of UNHRC resolutions on Sri Lanka since 2011, the US, UK and EU, urged Sri Lanka to implement commitments it made under resolutions 30/1 ( 2015) and 34/1 (2017) while commending the recent steps towards establishing the Missing Persons Office, within the first week of HRC 36.

At a side event held on 19th September Prof Alfred de Zayas, the UN Independent Expert on the Promotion of a Democratic and Equitable International Order reportedly spoke of the right to Tamil self-determination.  A new breed of radical, young and enthusiastic Tamil diaspora activists have taken over the advocacy at the council, while seasoned and moderate individuals have left the scene.  They are providing a platform for nationalist movements, fighting for self-determination in many parts of the world.  The vast majority of the Sri Lankan Tamil human rights defenders attending the 36th session of the Human Rights Council have close ties with the Tamil Civil Society Forum, for instance, while pro TNA advocates are almost absent in comparison.

The Special Rapporteur on the promotion of truth, justice, reparation and guarantees of non-recurrence, Pablo de Greiff, told the Council that he is ‘delighted to announce that the Government of Sri Lanka has invited [him] for an official visit to the country from 10 to 23 October 2017’. He has not received invitations from many countries to which he has requested visits. Soon after his visit, a mission from the UN Working Group on Arbitrary Detention will visit Sri Lanka in mid-December.  According to informal sources, the Special Rapporteur on the promotion and protection of the right to freedom of opinion and expression, David Kaye too will visit Sri Lanka in early 2018.

The issue is, as Human Rights Watch pointed out, although ‘Sri Lanka has invited several UN human rights experts to visit over the past two years and has given them free and unfettered access, the government has largely disregarded their recommendations.’  So the government has not been able to create a positive image as a result of those visits.

The soft spoken and eager to listen Pablo de Greiff is a Special Rapporteur with unquestionable credentials. He is a global authority on transitional justice.  Although this is his first official visit, he has been involved with Sri Lanka’s own process for some time now.  He is expected to raise concerns over continued occupation of land in the North by the military, disappearances and political prisoners held under the PTA and urge the Government to effectively address these as a pre-condition for a successful transitional justice process. This has been Pablo’s publicly stated position.

Another pressing issue Pablo has to address are concerns raised over security sector reforms. The Government has agreed to implement these reforms, as a necessary step towards post-war reconciliation but no visible action has been taken so far. One of the proposed reforms is the replacement of the Prevention of Terrorism Act (PTA) with a new Act, and this remains a mere illusion. According to Northern Province Chief Minister C V Wigneswaran, the military is holding 85,000 acres of land in the North and has 150,000 soldiers stationed there. Contradicting this, the Government report to the UN Universal Periodic Review of Sri Lanka contends that only ‘a total of 6051.36 acres of private land occupied by the military remain to be released.’

Pablo de Greiff and the Working Group on Arbitrary Detention may submit their reports to the March session in 2018.  The way things stand now, there is no doubt that the reports will be critical, if not negative.

The 3rd circle of the Universal Periodic Review (UPR) of Sri Lanka will be held in two months’ time in Geneva. The UPR report too will be presented at the March 2018 session. In addition, High Commissioner Zeid will present a written update on the implementation of Council resolutions 30/1A and 34/1 at that session. His comprehensive and final report on the implementation of those resolutions will be in March 2019.

If the Sri Lanka Government continues to fail in its commitments to implement a comprehensive process which will address burning human rights issues, the frustrations being felt at the ongoing Human Rights Council session will start to snowball. The next Council session in March 2018 is going to be crucial for Sri Lanka. The signs of things to come can already be heard in the corridors of the Palais des Nations.

Sri Lanka continues in its endeavour to win international goodwill with words and invitations to UN officials. The latest expression of this process is President Sirisena’s meeting with rights commissioner Zeid in New York. As reported by the President’s media unit, Sirisena told Zeid that the government is moving forward in the fields of human rights and reconciliation step by step and Zeid’s diplomatic response was that he would be more satisfied if the journey of this Sri Lankan government would be speeded up.

We should expect Zeid to accept the offer made by Sirisena to visit Sri Lanka and see the progress achieved.  The Government’s objective seems to be to capture the moral high ground by inviting Zeid before he reports to the UNHRC on progress made by Sri Lanka on the transitional justice process.  In any case, this invitation to Zeid by the president of Sri Lanka is a positive development and shows that the president is confident of implementing this process, at least to some extent.

Those who enjoyed this post might find “Disconnected: Juxtaposing the UNHRC sessions with protests in the North” and “UNHRC Resolution: To be viewed with objectivity” enlightening reads.

This article was first published in Groundviews.