OMP disruption in Kilinochchi: Victims must not be held hostage to politics 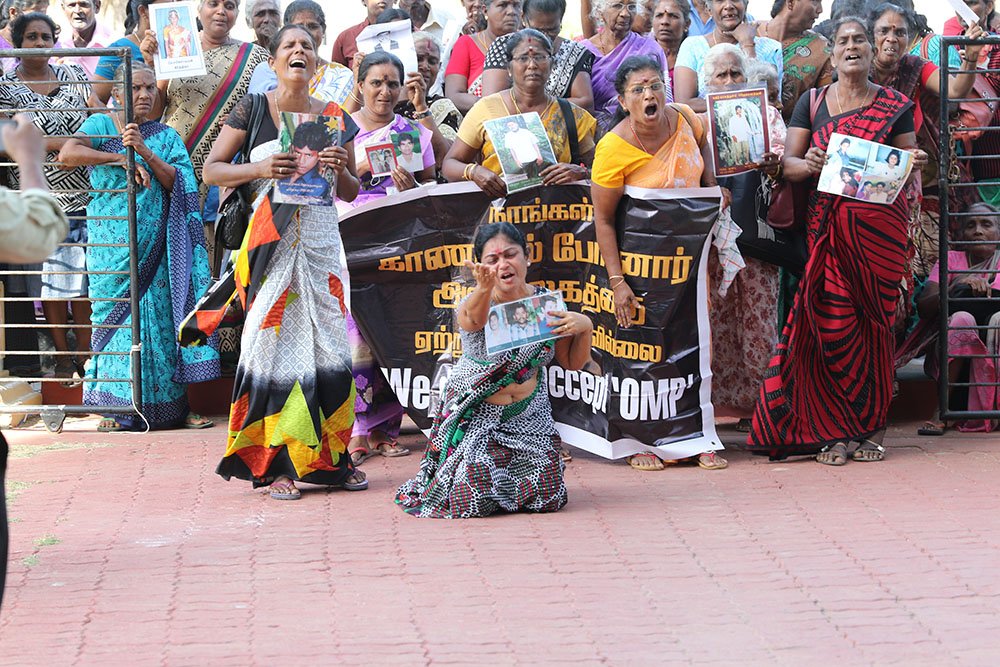 Image: Protesters blocked  the entrance to the OMP meeting in Kilinochchi. (Vikalpa photo)

The government has established an Office of Missing Persons (OMP) and is now in the process of passing legislation to establish an Office for Reparations as part of its commitment to ensure post war reconciliation.  The government promised to set up these mechanisms, amongst other reform measures, during the September 2015 session of the UN Human Rights Council.

The National Peace Council has welcomed the establishment of the OMP in February 2018 with the appointment of independent commissioners led by those with long records of human rights activism.  The credibility of an institution depends greatly on who runs it and those who currently lead the OMP are those who have been committed to inter-ethnic and inter religious justice for decades.

The NPC appreciates that the government continues with its post-war reconciliation process despite strong opposition from nationalists and party political rivals on both sides of the ethnic divide.  This opposition is fueled both by misinformation about the purpose of these reconciliation mechanisms and by the desire to gain partisan political advantage.

Political opponents of the government have been alleging that the OMP is meant to find evidence against the Sri Lankan security forces and take them to international war crimes tribunals and to a non-existent electric chair at The Hague.  They have accused the government of betraying the security forces and deserving to be punished as traitors.  Ironically in the North too there has been opposition to the OMP.

The NPC is concerned about the protests that are taking place at information sessions of the OMP.  Public meetings held by the OMP have seen victim families being prevented from gaining access to the meeting place by those protesting against the OMP which includes both political activists and victim families themselves.  We deplore making victims a part of a political agenda of any side.

The issue of how best to deal with the past continues to divide Sri Lankan society.  There are different points of view as to how best move forward.  However, there is a need to respect the right of victims and their families regarding their engagement with mechanisms set up by the government.  The right of people to attend the sessions of the OMP without disruption is paramount.  The NPC calls on the government, political parties and civil society to ensure that the right of the people to make their own decisions is respected.