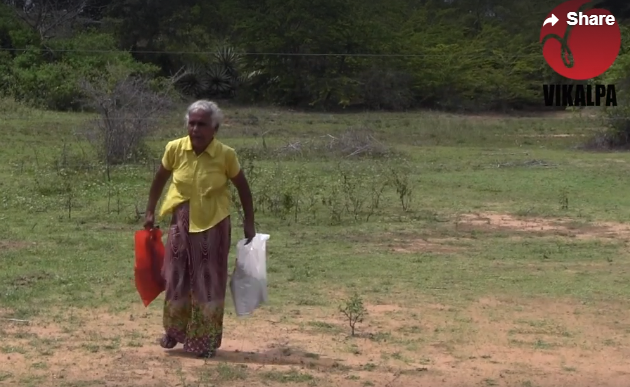 Image:Panama villagers are demanding   their land occupied by security forces to be released. (Credit: Vikalpa)

The third Cycle of the Universal Periodic Review of Sri Lanka will be held on Wednesday 15 November 2017  at 14:30 – 18:00 in Geneva UNHRC building, palais des nation. The Office of the United Nations High Commissioner for Human Rights has compiled and submitted a report  on Sri Lanka for the consideration by the states. excerpts from the report follows.

1. Right to work and to just and favourable conditions of work

53. The United Nations country team noted that the right to work was not explicitly recognized in the Constitution except as freedom to engage in a lawful occupation or profession, which included the right to engage in trade union activities,72 and that the Termination of Employment (Special Provisions) Act specified that no person could be terminated from his services other than through his consent or by an application made to the Commissioner of Labour. Termination on the disciplinary grounds could be challenged before the Labour Tribunal.

54. The Committee on the Elimination of Racial Discrimination recommended that Sri Lanka assist women heads of households in gaining access to employment and basic services to improve their socioeconomic condition.

55. The Committee on Migrant Workers recommended that Sri Lanka create income-generating opportunities for women, including in rural areas, and prevent domestic violence in order to make migration a choice, not a necessity.

56. It also recommended that Sri Lanka put in place a comprehensive, gender-responsive, fair recruitment policy with high standards; ensure that recruitment agencies improved the services they offered; hold those agencies accountable for the non-execution of their duties; regulate irregular subagents and brokers and sanction unlicensed agencies; and regularly update the recruitment agency blacklist and make it public.

58. The Committee on Economic, Social and Cultural Rights was concerned that the allowances of the main social assistance programme, Samurdhi, were insufficient and that mandatory deductions were imposed, such as in the case of savings, which lowered the allowances paid. It recommended that Sri Lanka reform the social protection system and ensure universal social security coverage and sufficient benefits for all persons, including those from the most disadvantaged and marginalized groups.

3. Right to an adequate standard of living

59. The United Nations country team expressed concern about large-scale evictions under the Urban Regeneration Programme instituted by the previous Government and the subsequent relocation of low-income families away from the city centre.

61. The United Nations country team also expressed concern about the lack of availability of youth-friendly health services for adolescents and the lack of access to professional mental health care in the context of post-war reconciliation. It was also concerned that doctors and other medical staff were often unaware of and insensitive to the health needs of lesbian, gay, bisexual and transgender people.

62. The United Nations country team noted concerns by university academics and students regarding the deterioration of academic freedom and university autonomy. It also noted that young people often did not have access to accurate and youth-friendly sexual and reproductive health information and that sexual and reproductive health and rights education through the formal school system was limited.