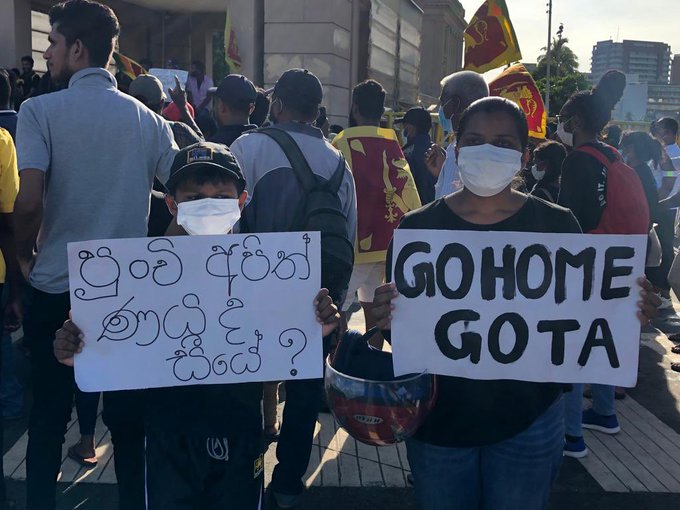 Issuing a statement National Peace Council has proposed a new and smaller cabinet as with a new PM under President Gotabaya Rajapaksa as a interim government to face the #GoHomeGota protests and for economic recovery. The statement does not say how long the interim set up should govern the country.  The statement is silent on the popular demand for abolishing executive presidency.

The government’s decision to temporarily default on sovereign debt repayments, akin to a declaration of bankruptcy, will deal another major blow to the country’s economy and credibility.  It comes at a time when mass protests are spontaneously taking place in all parts of the country on account of the economic hardships that the people are being put through.  The resignation of the cabinet nearly two weeks ago and the failure to appoint a new one is indicative of government paralysis which is injurious to the country.

The mass protests have continued non-stop, and continued even on New Year days traditionally devoted to the family and to religious observances.  They are a popular expression of the withdrawal of the people’s mandate from the government. The slogans both written and articulated in all demonstration sites in Colombo and elsewhere convey that the President and government have lost their mandate to govern and need to resign.  This sentiment has generated a mass movement coming together irrespective of their religious and ethnic backgrounds.

The National Peace Council believes it is the responsibility of the president and parliamentarians who function under the provisions of our Constitution to find modalities to come together to pull the country out of the plight we are in. The focus of the mass protests has been the corruption and lack of accountability within the government.  We call on the government leadership in particular to heed the will of the people which is getting stronger by the day and restore their credibility and dignity.  We endorse the spirit of the demands currently being articulated.

Accordingly, we call on the government to repeal the 20th Amendment that concentrates powers in the presidency and erodes the independence of state institutions that ensure accountability and transparency.  A downsized presidency and an interim government with a new prime minister acceptable to both the government and opposition is the most urgent necessity.  Such an interim government with new faces could also appeal to the international community for the necessary bridging finance to enable the economy to get restarted. Immediate attention should be given to supply fuel, cooking gas, electricity, medicines and essential goods to the general public.