Massive peoples protest in Sri Lanka; a reason to hope for a better future – GTF 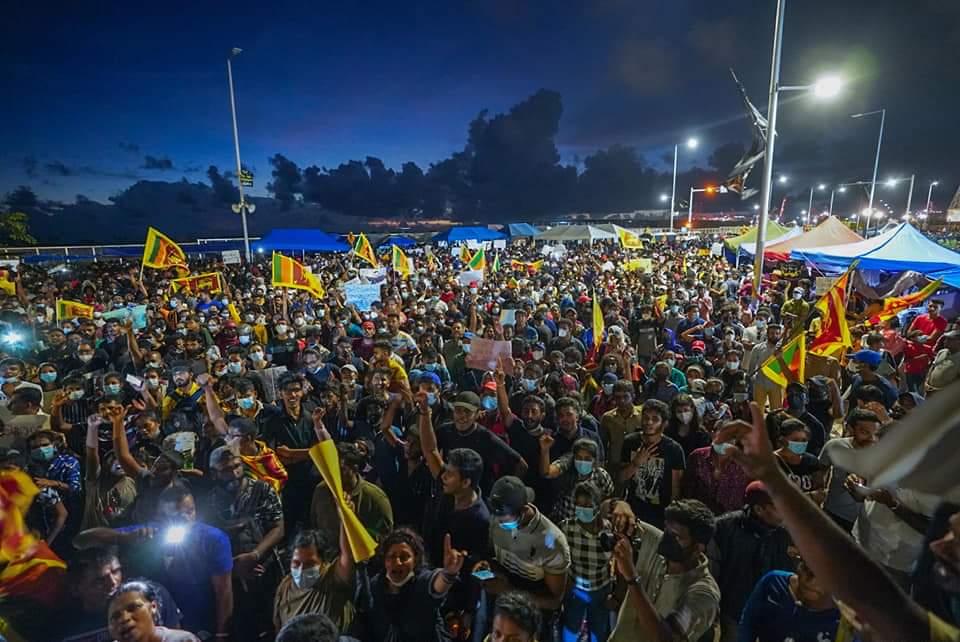 It is important that the peoples of Sri Lanka, irrespective of their ethnicity, religion, party affiliation or country of domicile, identify with these citizens’ effort for change and render their support.

Sri Lanka is in the midst of many crises.  The economic calamity developing over the last two years is now a full-blown economic and political crisis. The people have lost total confidence on the government to steer the country out of this crisis. Fear is gripping that the conditions are going to get much worse to the point of widespread hunger and malnutrition which in the past was seen only in the Tamil areas during the war. It is this desperation as well as the realisation of the incapacity, self-aggrandizement, repressive and autocratic rule of the Rajapaksa clan that is fuelling the spontaneous protests all across the country and among the Sri Lankan diaspora.

Sri Lanka has undoubtedly reached its nadir in its post-independent history and is fast becoming a failed state. Its history of living beyond means; nation-building blunders that treated one-third of its people as second class citizens; policies of marginalising the Tamil community leading to the three-decades-long war of destruction, displacement and huge defence expenditure; the inability to reap the benefits of peace post-2009 through political accommodation, demilitarisation of former conflict areas, and extensive economic support from the affluent Tamil Diaspora; and ill-considered, corruption-riddled megaprojects often with no scope of economic returns, nepotism – all of these have contributed to where the country finds itself today.

This downward trajectory accelerated drastically under Gotabaya’s presidency – arguably the least competent government in the history of Sri Lanka – as exemplified by its disastrous taxation and fertiliser policies. All warnings about the impending economic Armageddon were ignored for more than a year. These are self-evident truths for any keen observer of the country. But the government is still refusing to own up its blunders, simply blaming it all on COVID, and hoping that crisis management and crafty politics will help its survival.

“It is time the leadership listened to the people, put aside destructive personal and political agendas, and acted in partnership with all political parties to make fundamental changes to the present governance arrangements with targeted initiatives to overcome the economic crisis.”

The recent economic disaster has its roots firmly in the political debacles of President Gotabaya. The electorate was taken up by his Sinhala Buddhist nationalistic bravado excluding the Tamils, Muslims, Christian and other minority communities of Sri Lanka in its vision for the country and chose to ignore his atrocious human rights record. In power, President Gotabaya displayed little regard for human rights, rule of law, democratic governance and promoted further polarisation among communities (just a few examples; forced cremation policy during the pandemic, appointment of a racist monk as head of Presidential Commission for ‘One Country One Law’). The autocratic rule by the President through a small coterie of family members and handpicked serving and ex-military personnel, with a severely marginalised Parliament under the newly enacted 20th amendment to the constitution, led to a government with no checks and balances, and no competent support from capable and independent commissions and officials.

It is time the leadership listened to the people, put aside destructive personal and political agendas, and acted in partnership with all political parties to make fundamental changes to the present governance arrangements with targeted initiatives to overcome the economic crisis.

Embarking on deceptive half measures such as reallocating ministries among the same council of ministers is not a credible option.

The message from the people are clear – they had enough of the corruption and nepotism of the Rajapaksa family and calling for accountability for their past and present actions; want freedom to express their views and protest peacefully; do not want authoritarian rule under any political leadership; and want to return to their normal life with basic economic needs met.

Addressing these concerns needs an effective transitional governance arrangement that will not have Rajapaksas’ dominance but will have the credence to seek support from international governments and institutions to alleviate the immediate livelihood difficulties of the people.

In parallel, the governance structure of the country needs to be comprehensively overhauled.  A consensus seems to be evolving in Sri Lanka and among the diaspora (with the possibility of many groups working together), regarding the key features of a reformed state – (a) abolishing Executive Presidency and empowering the Parliament to be the centre of power; and (b) ensuring meaningful power devolution to the regions as a means of empowering all communities. It is important that all these critical legal and constitutional reforms are carried out judiciously and concurrently.

Tamils in Sri Lanka have been struggling for their political rights over many decades. For the last twelve years, they have sought to overcome several crippling effects of the war which include returning to their land to lead a normal life without an overpowering military presence and knowing the truth about their missing relatives. Despite many commitments given locally and internationally by the Sri Lankan leaders, progress has been marginal at best, and the support from civil society from the South has been negligible.  All of these leading to widespread apathy and cynicism among the Tamils regarding the present developments in the country.

Whilst we share these disappointments of the Tamil community, GTF recognises the remarkable and hopeful developments taking place in Sri Lanka and their potential to trigger meaningful and long-lasting changes in the country. It is all the more critical that this momentum should not be lost but lead to a historic transformation in the country, with no violence whatsoever from any quarters.