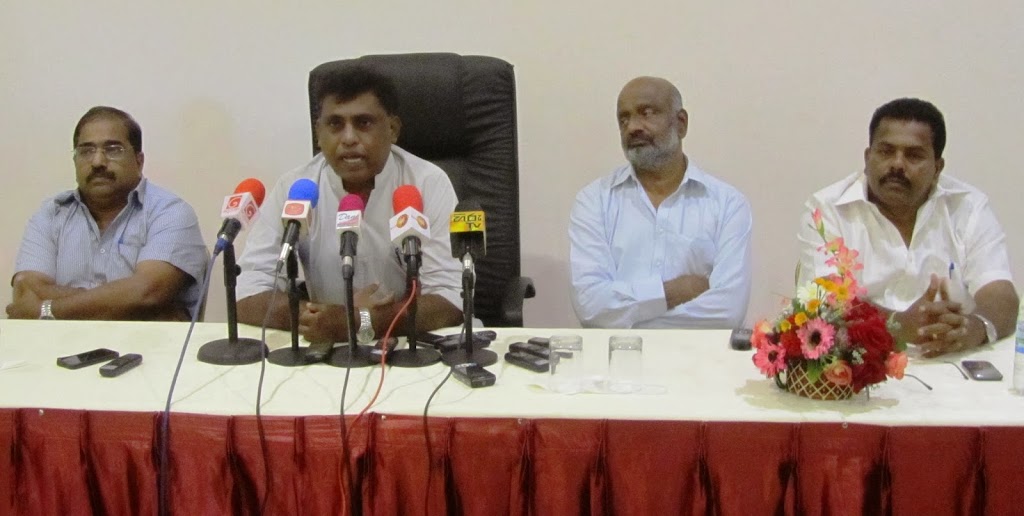 By Manekshaw
The new  (NPC) members, including the four ministers, took their oaths before Leader of the Tamil National Alliance (TNA), R. Sampanthan, and Chief Minister C.V. Wigneswaran at a modest ceremony at the Veerasingham Hall, Jaffna yesterday.

Prior to the swearing-in ceremony, the TNA’s NPC Councillors led by Sampanthan and Wigneswaran, attended a ceremony where they offered floral tributes to the monument of late S.J.V. Chelvanayakam, the founder of the Illankai Tamil Arasu Katchi (ITAK), the Party that had entered into two important pacts with late Premiers, S.W.R.D. Bandaranaike and Dudley Senanayake, to fulfil the political aspirations of the Tamils in the North and the East through a federal system.

The two treaties, which are popularly known as Banda-Chelva Pact and Dudley-Chelva Pact, had failed soon after they were signed. However, nearly 50 years after the signing of those two pacts, late Chelvanayakam’s dream of devolving powers to the regions and self-rule for the Tamils have been recognized to a certain extent, with the formation of the NPC, which could be a stepping stone in the direction towards greater devolution of powers in the future.

Even S.C. Chandrahasan, the son of late Chelvanayakam has expressed his happiness over the formation of the NPC and the manner democracy was in action during the provincial election process in the North after several decades.

Chandrahasan, who was a contemporary of Minister of External Affairs, Prof. G.L. Peiris, at the University of Colombo, had even effectively contributed in moulding the Indo-Lanka Accord, from the periphery.

As the Liberation Tigers of Tamil Eelam (LTTE) was all out to wipe out the Tamil moderates and the intelligentsia, who spoke in favour of the Indo-Lanka Accord, Chandrahasan went into self-imposed exile in Tamil Nadu and initiated a Non-Governmental Organization (NGO) assisting the refugees who arrived from the North and East to the South Indian State.

Overwhelmed
A few days after the NPC polls, while talking to a Canadian journalist at the refurbished Kilinochchi Railway Station, while waiting for the Colombo-bound train, Chandrahasan said, he was overwhelmed by the enthusiastic participation of Northerners at the NPC polls.

His late father, Chelvanayakam, who was a firm believer in non-violence, staged several non-violent protests against the hardliners in the South, to win the political rights of the Tamils. Though late Chelvanayakam was very firm in his political ideology, he never advocated extremism or urged his followers to adopt a ‘war path’ towards achieving their political rights. However, the late Gandhian had warned during his Parliamentary days that the demand for a separate State would be inevitable, if the right to self-determination of the Tamils was not recognized, on the basis of a federal system.

Right from the beginning, the ITAK of Chelvanayakam had been the undisputed political force in the North and the East, until the Tamil United Liberation Front (TULF) was formed to spearhead the demand for a separate Tamil State called the Tamil Eelam, with a resolution passed at Vaddukottai in 1976.

Therefore, currently, in the backdrop of Tamil moderates realizing the error they made towards calling for a separate SXXtate and with the defeat of the Tamil militancy, the Provincial Council system under the Indo-Lanka Accord has been accepted as a pathway that can lead to an amicable solution to the Tamil problem.

Be that as it may, the swearing-in ceremony of NPC members took place at the Veerasingham Hall, the venue which had witnessed several landmark events in the recent history of Jaffna. On the other hand, the four-storeyed building has also suffered due to the brutal war. It remained in the middle of a veritable battle ground as the Security Forces based within the Dutch Fortress of Jaffna and the Tamil militants dabbled in a fierce battle.

A historic event
The swearing-in ceremony was a historic event, which marked the beginning of a new chapter in the Tamil political history in the country.

As the names of the four new ministers were announced by the TNA hierarchy on Thursday (10), another senior TNA Parliamentarian and Leader of the Eelam People’s Revolutionary Liberation Front (EPRLF), Suresh K. Premachandran, was up in arms against the decision, saying the constituent parties were not consulted over the appointments of four NPC ministers. Premachandran accusing the ITAK, which is considered the flagship of the TNA, said the Party acted on its own in an authoritarian manner, even in appointing his Party man Iynkaranesan as a minister, without consulting him.

Premachandran has been a critic of the dominance of the ITAK in the Alliance in the past and several other constituent parties had also expressed their support to Premachandran, when the ITAK took the upper hand in deciding on prime issues within the Alliance.

A few months ago, just prior to the announcement of the NPC polls, the TNA was on the verge of collapsing. Thereafter, when the issue of selecting the Northern Chief Ministerial candidate surfaced, a crisis situation emerged and it was later solved amicably when another contender for the Chief Ministerial candidacy, Mavai S. Senathiraja, stepped down and paved way for C.V. Wigneswaran.

The mega victory achieved by the TNA in the recent NPC polls was mainly due to the solidarity expressed by the constituent parties in the Alliance and the achievement has been lauded locally as well as internationally.

The victory in the NPC polls was appreciated also by the progressive political forces in the South.

However, the angry call by TNA Spokesperson Premachandran, saying that the ITAK, the main Party within the Alliance, conducting itself in an authoritarian manner, highlights the political challenges that lay ahead in maintaining the integrity of the Alliance and the new NPC administration.

Whether in the Tamil moderate political arena or in the militant struggle, the North and East regions have a long history of clashes and differences in opinion within the parties as well as among the militant outfits.
Apart from the arrogance of the hardliners in the South, the Tamil political scene has been weakened due to its own differences and mishandling of the key issues in the past.

Therefore, Suresh Premachandran’s description of the ITAK as an authoritarian force within the TNA clearly underlines the enmity that exists within the Tamil political movement.
CT