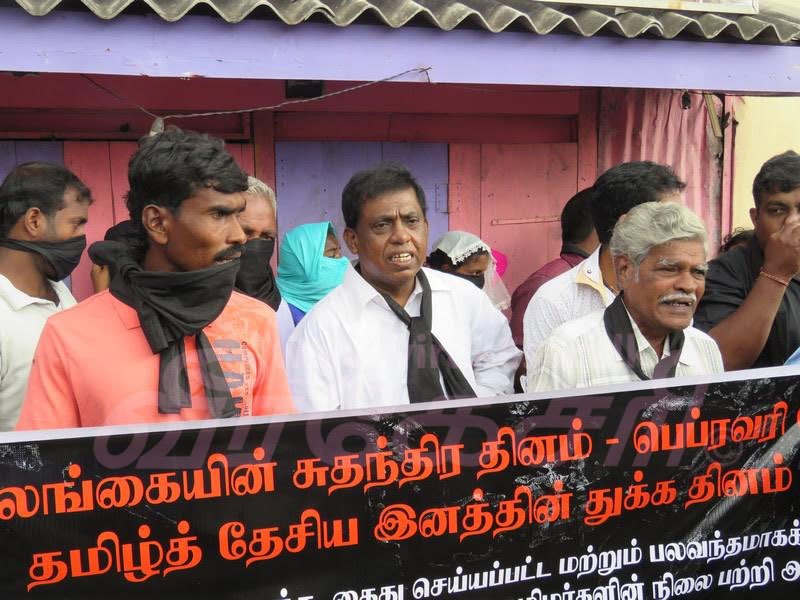 Image: A small section of radical Tamil nationalists led by Northern Provincial Council members M.K.Shivajilingam and Ananthy Sasitharan, observed the independence day as a “Black Day” for the Tamils.

North Sri Lankan Chief Minister Wigneswaran is increasingly taking steps that portrait him as the uncompromising Tamil nationalist leader. At the same time by his words and deeds he is moving away from the party he represents, the Tamil National Alliance.

TNA participated in the Independence day celebrations held in Colombo.

Under the heading “Wigneswaran mulls Northern Council war crimes accountability mechanism” newindianexpress.com reported that
he has suggested that the Northern Provincial Council (NPC) explore the legal possibility of instituting its own independent war crimes accountability mechanism in the absence of an international judicial mechanism recommended by the UN Human Rights Council (UNHRC) in September 2015.

He has  said this on  30th January 2017 while speaking at a function in Vattakandaal Tamil Mixed School in Mannar district, where 60 to 70 people including Principal V.Sundaramoorthy and teachers T.Mahendiran and S.Ratnadurai were gunned down by the Sri Lanka Army on January 30, 1985.

The Chief Minister asked the Leader of the Opposition in the NPC, Sinnadurai Thavarajah, who is also a lawyer, to look into the legal aspect of his proposal and report. The memorial function was organized by Thavarajah as his sister’s husband was among those massacred in the school.

With a week for the second time he offended the Colombo government by  boycotting the Independence Day function held in Jaffna on 4th Feb. Instead he attended protest meetings held at Keppapilavu and Puthukudiyiruppu in Mullaitivu district, reported Newsin.Asia.

The report further says that the Governor of the Northern Province, Reginold Cooray, hoisted the national flag a the ceremony, , but the Chief Minister chose not to be present.

A small section of radical Tamil nationalists led by Northern Provincial Council members M.K.Shivajilingam and Ananthy Sasitharan, observed the day as a “Black Day” for the Tamils. Wearing black bands and scarves and covering their mouths with black cloth, they held a demonstration in front of the District Secretariat putting forth five demands.

Chief Minister Wigneswaran drove to Keppapilavu to join the protest against the military’s refusal to give back 530 acres of land seized from the local people during the war which ended in 2009. After addressing the protesters he went to Puthukudiyiruppu were there was an agitation to recover 19 acres pf private  land from the military.

According to Chief Minister Wigneswaran, the government has returned less than six percent of the lands the military had seized  during the war. And according to the British Tamil Forum, by 2016, government had given back only 2565 acres of the 69,990 acres it was holding in 2015.

Shivajilingam said that the people are opposed to the further expansion of the Palaly airport runway because it will mean they will not get some of the seized lands back.

“The existing runway can very well take A320 aircraft which are big enough to meet Jaffna’s demand for flights to cities in South India,” he said.