North East Coordinating Committee writes to UNSG : UN’s participation is vital to establish rule of law and to protect the rights of minorities in Sri Lanka. 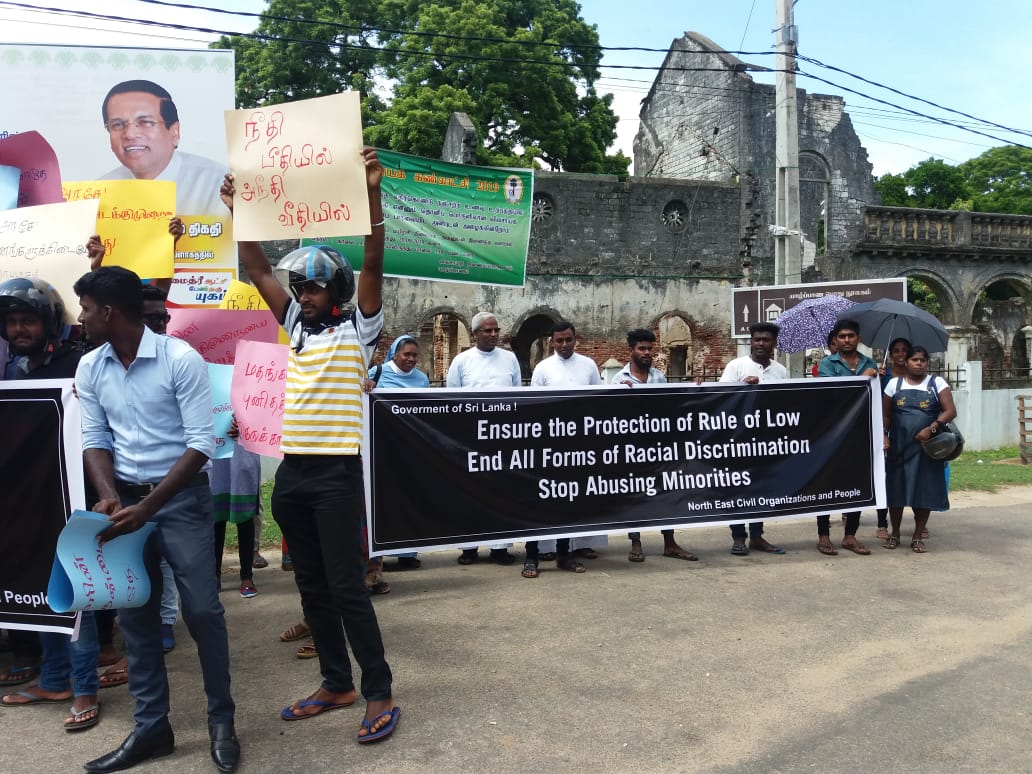 TO THE ATTENTION OF HIS EXCELLENCY ANTONIO GUTERRES, SECRETARY GENERAL OF THE UNITED NATIONS.

UN’s Participation is Vital to Establish Rule of Law and to Protect the Rights of Minorities in Sri-Lanka.

Since 1948, we the minority people of Sri-Lanka have continuously been subjected to oppressions by the discriminatory ethnic policies of the governments that were in power, by the executive bodies, by the institutions that are responsible for maintaining the rule of law and by the violent attacks of the Sinhala Buddhist extremist elements. Since 1983, we have been subjected to continuous displacement due to speedy militarization, systematic Sinhala colonization and the war that took place in the North and East regions of Sri-Lanka which resulted in the loss of our lands as well as our livelihoods. Especially, we were subjected to face the massive destructions of the war including genocide and collective sexual crimes which were committed against the members of our community. Further, due to the enforcement of the Prevention of Terrorism Act, members of our minority community were subjected to arbitrary arrests, long periods of detention without trials, custodial torture and enforced disappearances.

We believed that the change of regime in Sri Lanka in 2015 and the agreements made between the UN and Sri-Lankan government to promote peace and reconciliation in the country would bring justice to the minorities and would ensure our rights. On the contrary, the Sri-Lankan government has not only been  engaging in systematic Sinhala colonization in minority areas with the support of the military but also not preventing Buddhist extremists’ encroachments in these areas. Places of worship, cultural locations, livelihood lands…etc. of minorities are forcefully taken over by these elements. In the past minorities were attacked and humiliated by the Sinhala Buddhist extremists and still such threats have been increasing.

Your Excellency We hereby bring to your notice some of the recent incidents:

Neeravippiddy Pillayar Hindu temple is situated in the Chemmalai area of Mullaitivu District. In 2009, the area was taken over by the Sri-Lankan military and they put up their camp and built a Buddhist worship place for their own worship purposes. When the army left the location, the late Buddhist monk Kolamba Medhalankarakitthi Thera encroached the location and built a Buddhist Vihara despite a complaint made at the Police Station by the Administrative Board of the Neeravippiddy Pillayar Hindu temple . The Police filed a case at the Mullaitivu District Court based on this complaint. The judgment in this case was that both Hindu and Buddhist parties were entitled to worship in the location but were prevented from building new constructions: Case NO. 31823 (PC Section 81). However, the Hindus were continuously harassed by the monk and his followers and they also caused disturbances to the Hindu religious rituals in the location. Meanwhile, Kolamba Medhalankarakitthi Thera passed away in Maharagama hospital in Colombo due to illness  and his body was taken back to Mullaitivu on 21 September 2019.

The police were of the view that if the deceased monk’s body was cremated in the Hindu temple location that might led to ethnic tensions. Therefore on the same night the police lodged a complaint with the additional Judge of the Mullaitivu District Court. The judge ordered, that both parties should avoid going to the Neeavipiddy temple location and the cremation of the monk’s body should take place in another location, and not at Neeravippiddy. But police failed to enforce the order of the additional Judge. On Monday 23 September 2019, the Mullaitivu District Court ordered that the monk’s body shall not be cremated in the Neeravipiddy temple location and the cremation should take place in another suitable location. (Case No AR 745/19). The deceased monk’s followers agreed to this and gave an assurance to the Court that they would hold the cremation three kilo meters away from Neeravipiddy in a beach location.

However, Ven. Galagoda Aththe Gnanasara Thero and his followers who went to Neeravippiddy from the South acted against the court order by cremating the deceased monk’s body in the Neeravipiddy temple location while the Police provided protection, amounting to contempt of the Court by the Police. The Tamil lawyer who went to the location to explain the court order and few Tamil civilians were attacked by the Sinhalese while the Police looked on without making any attempts to arrest the attackers. It is important to note that this Ven. Galagoda Aththe Gnanasara Thero had previously been sentenced for contempt of court and later released by the Presidential pardon.

Under the name of Mahaweli development, the Government is encroaching the traditional lands of minority people in the North and East and implementing systematic Sinhala colonization in these areas with the support of the military. People who have lost their lands are unable to go back.

The aggrieved persons have been appealing to the Government repeatedly to give them back their lands but there is no response from the Government yet.

This Hindu temple is located in the area of the historic Kanniya Hot Water Wells in the Trincomalee District. The land of the temple is a private property belonging to a Trust and they possess all relevant legal documents. After the war this temple area was encroached by Buddhists and they claim it as their traditional land. On 16 July 2019 when the minorities staged a non-violent protest against this encroachment, some the protesters, including women, were splashed with hot tea on their faces and humiliated by the Sinhalese men who run small shops in the location in the presence of the Police who were looking on without taking any action.

These above stated incidents are a few examples of the ongoing oppression against the minorities, evidence of the expansion of the Sinhala Buddhist extremism, biased treatment meted out to the minorities by the Government and the violations against the rule of law.

The contempt of court order, Police inaction in taking legal actions against persons who were breaching the Court’s order, encouraging racism, etc. prove that the rule of law of the country has collapsed. This is a serious threat to the safety and security of the minorities.

The Rule of law is the basic principle of UN and it is the core of the UN Charter. Therefore, we call upon the UN to engage with Sri-Lanka which is a member state of UN to fully implement the rule of law, to protect the minorities and to end the anti-social activities of the Sinhala Buddhist extremists. 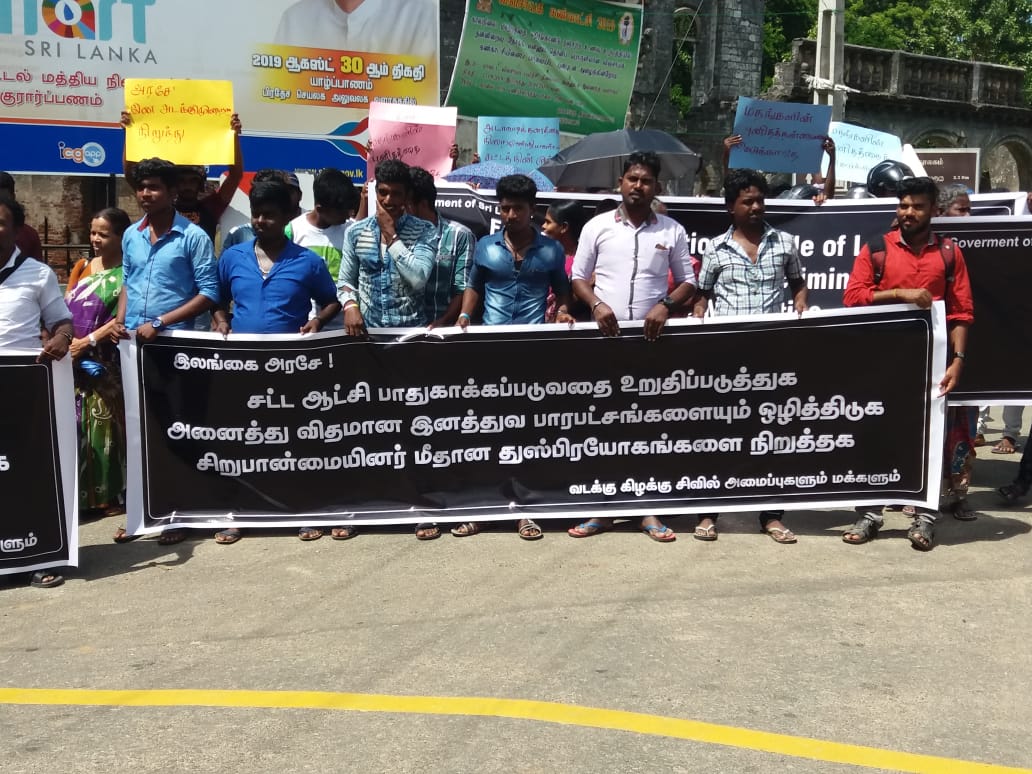