NO FIRE ZONE: Do you have hopes of such an investigation ever happening? Yes, I do – Callum Macrae 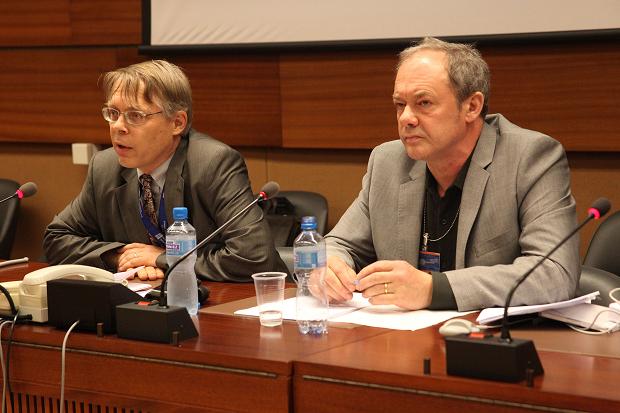 After the screening of NO Fire Zone at UNHRC side event , Amnesty International talked to Callum Macrae, the director of “No Fire Zone” and the Sri Lanka’s Killing Fields series.

Amnesty International: How is this movie different to the two previous ones in the Killing Fields series?

Callum Macrae: This is a different kind of film. It is feature length unlike the other two, so we’re able to provide much more detail on the background and context. It gives the viewer much more of a real understanding of what actually happened in the No Fire Zones (NFZ) during the final bloody months of the war.

[The NFZs were so-called “safe zones” established by the Sri Lankan army during the conflict where civilians were meant to be able to escape the fighting, but the army has been accused of deliberately shelling those areas]

We are not just trying to prove individual specific crimes as in the last two movies, but really show the huge scale of the violence and the horrible reality behind that phrase you hear so often, “deliberate targeting of civilians”. In early 2009 there was a sustained period of several months when people in the north of Sri Lanka went through unimaginable suffering – we are trying to show the sheer awfulness of what happened. We are depicting things that should never be shown in a movie, but it is helping to get the real truth out there.

This movie does partly seem like a longer summary of the first two installments, but you do also present some new evidence?

Yes, absolutely. In particular the interview with Peter Mackay, a former UN staffer who has spoken out for the first time publicly. He became trapped in the first NFZ as the shelling started, and his interview really is conclusive proof that the government was deliberately targeting the NFZ.

There are also the pictures of [LTTE leader] Velupillai Prabhakaran’s son Balachandran. The movie shows photos of him alive in detention by the Sri Lankan army, as well as pictures of him shot dead on a beach – both set of pictures were taken with the same camera only a few hours apart. These have been verified by experts, and show that the government flat out lied when they claimed Balachandran had been killed in crossfire. They also show that there was a deliberate policy of executing prisoners that was at the very least tolerated by the government.

You see so much death and horror in these movies – but images of people alive, like the one of a 12-year old boy eating a snack, are almost the most chilling.

How have you gathered evidence for this movie?

The footage comes from a variety of sources. Much of it was taken by Tamils trapped in the war zone – but much has also been taken by Sri Lankan army personnel and circulated as war trophies. This is the case of the images of Balachandran, for example – they were taken by soldiers, and eventually passed along to us by a group called Journalists for Democracy in Sri Lanka. It is an extremely brave organization that has been at the forefront of getting evidence out there – and ironically the very organization the Sri Lankan Ambassador just called a “shadowy group”.

What do you hope to achieve with this movie?
This is not an exercise in academic accountability or truth for truth’s sake. There is a generation of Tamils who watched the world betray them, and that generation is now looking to the world for justice. If that does not happen, the consequences could become catastrophic – the grievances could lead to people taking up arms, more decades of violent conflict and more bloodshed.

If we can have a role in getting the truth out, and in ensuring that there is a genuinely independent, effective and international investigation into the war crimes allegations against the government and the LTTE – that is success to us.

Do you have hopes of such an investigation ever happening?

Yes, I do. The Sri Lankan government’s denials have become increasingly desperate and implausible. It is also becoming perfectly clear that the government is unwilling and unable to investigate itself.

The Lessons Learnt and Reconciliation Committee (LLRC), the government’s own body investigating the civil war, produced a report that, although flawed in many ways, did include some useful suggestions. One of these was for a credible and independent investigation into the armed conflict – including specific mentions to investigate cases we brought up in our first film. But so far, the government has completely failed at following up on this, despite repeated promises to do so. The LLRC has become an empty vessel.

What is the situation like in Sri Lanka today?

This is something we’re also addressing at the end of the movie. The government is becoming increasingly dictatorial – the Rajapaksas are consolidating power by taking over state institutions and putting them under their own control. There are mounting attacks against those opposing them. One very clear example is the judiciary, which the government has systematically attacked and dismantled. Apart from physically beating up lawyers, in the early months of this year the chief justice was impeached simply for trying to block a law that would grant the Rajapaksas even more power.

Anyone interested in screening the movie are welcome to get in touch with the team behind No Fire Zone through their website: http://nofirezone.org/