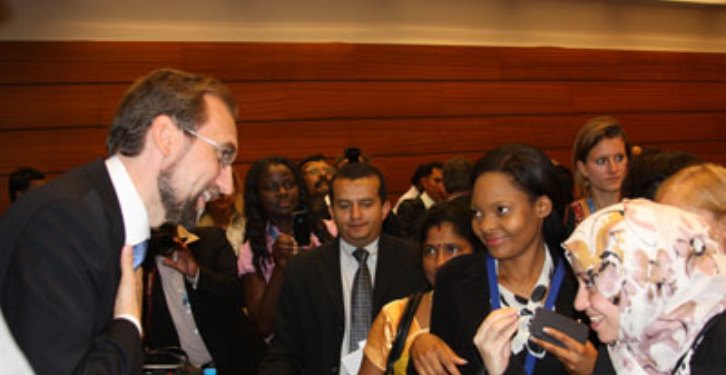 “When we speak of human rights and we think of what are the fundamentals — what is the heart — it is clear that you, the NGO community, must be the heart,” said UN High Commissioner for Human Rights Zeid Ra’ad Al Hussein.

[High commissioner laughs while speaking to a group of men and women while at the podium ©] Zeid said the work being done by many of the civil society actors has shown “astonishing courage,” particularly at a time in history when it seems that the right to exist as a human being is under assault.

“And it is you who make the fundamental difference,” he said. “We [the UN Human Rights Office] will continue to join you and work with you as you do the right thing: To be kind always; to be brave always; to defend essentially that which makes us all human.”

Zeid made his remarks during an NGO meeting taking place during the 27th Human Rights Council. The meeting provided an opportunity for the High Commissioner to meet with more than 260 members of the NGO community for the first time and listen to a number of their comments.

Several participants expressed concern regarding protection of human rights defenders, children’s rights and strengthening civil society engagement with existing human rights mechanisms. He was asked what guarantees he could give to protect defenders against violence.

“I can’t guarantee protection,” Zeid said. “No one can. But we will continue to put up a good fight. It’s like Newtonian physics: the more effective the NGO community is, the more pressure you feel. It goes to show how effective you are.”

Zeid said he wanted to continue the “collective endeavour” that the UN Human Rights Office has embarked on with the NGOs. And although in real terms the number of actual people working on the issues may be small, the impact is mighty, he said.

“The fate of the planet relies on such a small number of people,” he said. “You are a just a small fraction of humanity, and yet you do so much.”
OHCHR