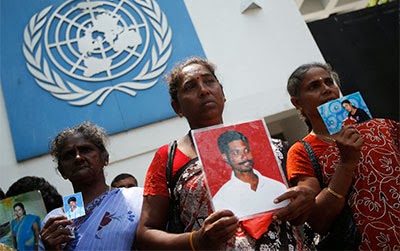 We the committees of the disappearance from the North and East, write to you as representatives of the collective body, that still seek justice. We do not trust any mechanism created locally which in the past has not delivered justice to the survivors.

We would like to register with Your Excellency our distrust of any local mechanism that investigates forced disappearances and abductions. We have seen at least four official truth seeking commissions that failed the survivors; some of them did not even release to the public their official findings.

We previously had two commissions established by the then Presidents, respectively in 1995 and 1998, to investigate forced disappearances which received around 30 000 complaints. Today 10,136 of the 30 000 complaints remained un-investigated. A more serious matter is that although special units were established to initiate criminal proceedings where prima facie evidence of responsibility was available and although legal proceedings were initiated against more than 500 police and army personnel, these proceedings largely targeted low-level officers and very few resulted in interdictions. To Amnesty International’s knowledge, there have been only three convictions under the Convention Against Torture and other Inhuman and Degrading Punishment Act (The CAT Act) in Sri Lanka. Up to 2007 there had been fewer than 30 convictions for abduction or wrongful confinement (the charges normally associated with enforced disappearances).

We also feel that “successive governments continued to use abductions and disappearances of persons as a convenient method of dealing with dissent or with those who become a thorn in their thorn in their sides” The interdicted were reinstated and often reassigned to the same duty stations from which they carried out abuses, thereby causing much distress to former victims.

Though President Rajapakse announced in 2006 that the government would invite an international independent commission to probe abductions, enforced disappearances and extra judicial executions in all the areas of the country, instead the government invited an International Independent Group of Eminent Persons (IIGEP) to act as observers of the activities of the local commission. The IIGEP issued several statements concerning procedural flaws that affected the transparency and independence of the Commission and the protection of witness, before it formally withdrew its services.

We also feel that “the history of these commissions provides an indicator of how commissions can be manipulated to defeat dissent and channel criticism of human rights towards institutions set up by the government of the day to protect itself. Even when commissions have fought against the odds for justice their work was restricted and compromised and their recommendations for prosecutions and reform were buried; many dissenting voices who engaged with these commissions have been threatened and the aspirations of those who testified have been betrayed”.

Sri Lanka has no witness protection programme. The lack of effective protection for witnesses against intimidation has been a very serious obstacle to the prosecution of human rights cases, and obstructs the work of any Commission of Inquiry by inhibiting witnesses and potential whistle-blowers. A bill to establish a rudimentary witness protection system in Sri Lanka has been stalled since June 2006. And although efforts to initiate an effective witness protection system are necessary and welcome, legal experts in Sri Lanka have noted significant flaws in the proposed legislation and the process by which it was drafted. Among the most troubling of these flaws were: its lack of an independent Protection Division (it relies instead on the Sri Lankan police force); its ban on foreign assistance for the purposes of witness protection; and the requirement that a public officer must be present when a witness is testifying.

We also would like to bring to your kind notice that Mr. Sunesh who was part of Disappearance Committee team and led the march during CHOGM during Mr. Camerron’s visit to Jaffna, was threatened and Mr. Sundaram Mahendran the head of the Committee of Missing Persons was attacked in Trincomalee when they held a peaceful demonstration on Human Rights Day in Trincomalee.

It is our grave concern that the government is using this exercise to buy time before the Genenva session in March and we are certain that the victims will not have justice. Therefore we strongly support an International independent UN working group to investigate enforced disappearances and abductions.