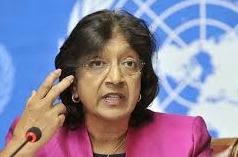 Dalit or Brahmin, Peul or Pole, gay or heterosexual, tycoon or pauper, woman, child or man – regardless of our ethnicity; our age; our form of disability; our beliefs; or our economic might, all human beings are equal in dignity. And all, without discrimination, are entitled to the same rights. I urge this Council to continue to maintain the universality, indivisibility and interdependence of all human rights, including the right to development.

Twenty years ago, Member States created this Office because they saw the need for an advocate to promote and protect human rights. They sought assistance to strengthen their accountability to their own people, in order that the world could become progressively safer and more stable – free from want and free from fear.
Excellencies, OHCHR stands at your side, not in your way. It is a friend that is unafraid to speak the truth. This Office does not only seek to help States identify gaps in their human rights protection. It also assists States to repair them, and to pursue policies that promote equality, dignity, development and the resolution of conflict, thus helping to realise the full sense of its double mandate – to promote and to protect the rights of all.
Today this work is widely acknowledged as valid. I trust that OHCHR will be able to continue in the characteristic spirit of independence, impartiality and non-selectivity that marks every level of its work.
My experience during the past six years has been enlightening and profound. I thank you for the work we have done together. I trust that I have proven to be a channel for effective change, and a strong advocate: one who speaks out without fear or favour.
It has been an honour to serve.
Share
Facebook
Twitter
WhatsApp
Pinterest
Email