The country insists all people who die of virus are cremated even if it violates religious beliefs.

The Muslim Council of Britain is launching a legal challenge to the Sri Lankan government’s policy that all people who die of Covid must be cremated, even in violation of their religious beliefs.

The insistence on cremation has caused great distress among the country’s Muslim minority. Islam stipulates that the dead must be buried. 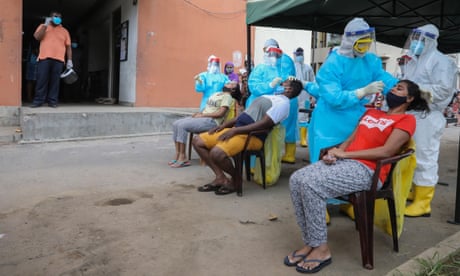 World Health Organization guidelines permit the burial or cremation of people who die of Covid, but the Sri Lankan government adopted a policy of mandatory cremations in March.

Earlier this month, a 20-day-old baby who died of Covid was cremated against the family’s wishes. The child’s father said he could not bear to witness the cremation.

“I cannot go into a place where they are burning my baby. My friends and family asked the authorities how they can go ahead with the cremation when neither of the parents had signed any document giving consent. They said because the baby is a Covid-19 positive patient, they can cremate,” MFM Fahim told Al Jazeera.

Some Muslim and Christian families sought to challenge the government’s policy in court, saying it violated their freedom of religion and fundamental rights under the constitution. But the supreme court dismissed the case in early December.

A taskforce set up by the Muslim Council of Britain has written to the Sri Lankan high commissioner in the UK demanding an immediate reversal of the “forced cremation” policy and its impact on Muslim and Christian communities. The MCB said it would also pursue “the necessary legal action to end this violation”.

Tayab Ali, a partner at London law firm, Bindmans, said: “The forced cremations of Muslim bodies in Sri Lanka are a serious violation of the religious freedom of a minority group. It is a violation of international law to delay returning a family member’s body for burial in a timely way unless there is good reason to do so.
“In this case the Sri Lankan authorities have departed from the WHO’s recommendation for the safe management of a dead body during the coronavirus pandemic without any justification.

“In addition, the Sri Lankan supreme court’s rapid and unreasoned dismissal of the application made by family members of the deceased leaves no domestic remedy to what some have described as ongoing persecution of the Muslim minority in Sri Lanka.”

Sri Lanka is majority Buddhist, with Muslims making up about 9% of the population and Christians about 7%. The country has had more than 25,000 cases of Covid-19 and 124 deaths, including more than 50 Muslims who were cremated.

Human rights activists say the cremation policy is part of an ongoing attack on the country’s Muslim community by the Sinhala Buddhist majority government, led by president Gotabaya Rajapaksa.

Rajapaksa was elected last year on a wave of anti-Muslim and hardline Buddhist sentiment, following the Easter suicide bombings by Islamist militants in churches and luxury hotels last April which left 267 dead.