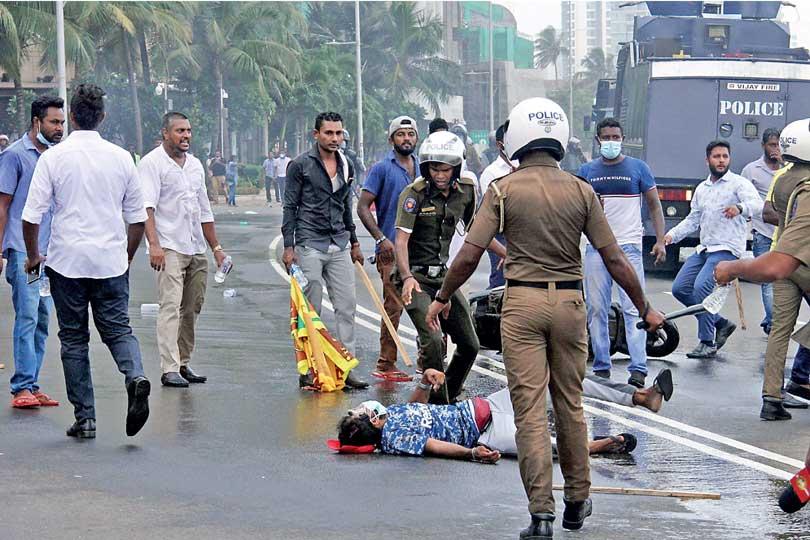 Issuing a press release on its recommendation related to the assault unleased on peaceful protesters on 09th May,the  Human Rights Commission of Sri Lanka says “the IGP was clearly in breach of duty by failing to provide adequate protection to the peaceful protesters and to uphold the rule of law. lt is recommended that the H.E the President directs an investigation into this aspect of the matter and take necessary steps to ensure that such actions by the Head of the Police Department will not occur in the future.”

HRC SL press release does not say anything about the involvement of Mahinda Rajapaksa and other SLPP bigwigs in planning and executing the attack.

RECOMMENDATIONS:
Whether the Law Enforcement Authorities have Provided Adequate Protection to Uphold the Rule of Law and for the Protection of the Fundamental Rights of the People on 9th May,2O22 The HRCSL had appointed a team of Special Rapporteurs to investigate and report whether adequate protection had been given to the peaceful protesters protesting opposite the temple tree and Galle face Green on 9th May 2O22 and whether the Law Enforcement officials took all reasonable steps necessary to uphold the rule of law on 9th May 2022.

The HRCSL has given its mind to the entire report of the COl. The following recommendation is based on the evidence revealed in the said inquiry.

The intelligence report though valuable is only one of the numerous sources of information; others are live and direct information coming from the ground (which includes the information from the various participants and informants), CCTV footage etc. The leadership of the police (lGP and the Senior officers) must have a system that constantly analyses all incoming information. The Police should have a system of obtaining all information relevant to prepare the officers for every possible attack.

It was revealed that the police could not accurately ascertain the speeches of the parliamentarians and the other State and non-State officials inside the Temple Trees. The failure of not obtaining this crucial information is attributed to the intelligence unit under the Secretary of Defense. (The State intelligence Unit) Once equipped with all the information relevant to the security of the people must be transmitted to lGP, who will then his officers. Although the officers appear to have been briefed by the IGP of an impending attack by the pro-governmental crowd, the miscalculation or erroneous information received by the IGP later appears to have contributed to this violent attack. lt is also conceded that there was an inherent duty of the senior officers on the ground to address the situation on the ground, but subject to the final supervision of the lGP.

As a matter of principle, in any hierarchical structure, whether police or military or governmental or political. lt is, of course, possible and even necessary that the Head of the Department delegate decision-making authority to his subordinates. They are typically “on the ground” closer to the unfolding events and facts. They typically have specialised in their respective sector, which the Head of the Department does not have. However, what cannot be delegated is the ultimate responsibility of the Head of the Department, in this case, the lGP, for everything that happens under his watch, including the actions or non-actions of his subordinates (in this case, the Senior Deputy General of Police Deshabandu Tennakoon and other senior officers who were on duty) It is also apparent and absolute that, in this case, the SDlGs, DIGS and SSPs (Deshabandu Tennakoon and all other senior officers who were on duty/ must obey and implement orders or directives given by his superior the lGP. lndeed, the whole system of the chain of command and indeed the success of any hierarchical setup depends on the tenet that subordinates follow the orders of their superiors. Otherwise, the whole system collapses, resulting in chaos.

It is certainly not proper, perhaps even illegal, if the “Superior Officer in Charge” (in this case, Deshabandu Tennakoon) consults directly with the Chief of his Chief, i.e. President, without first consulting or reverting back to his direct superior the lGP. Such behaviour disrupts the whole hierarchical system of the chain of command. And has undoubtedly the potential to disrupt the whole operation.

ln the present inquiry, it was revealed that SDIG (Deshabandu Tennakoon), when he received instructions from the IGP through another officer over the telephone, had called back the IGP before he called the President. Therefore, it is conceded that the call to the President by the SDIG Tennakoon in this instance was legal and proper.

ln these circumstances, as elicited in the report, the IGP was clearly in breach of duty by failing to provide adequate protection to the peaceful protesters and to uphold the rule of law. lt is recommended that the H.E the President directs an investigation into this aspect of the matter and take necessary steps to ensure that such actions by the Head of the Police Department will not occur in the future.

It is also recommended to His Excellency the President to direct an investigation into the lapse on the part of all the senior police officers, including IGP downwards, who were on duty at the protesting sites in Colombo for their inability to provide adequate protection to the peaceful protesters on 9th May 2022. And, if victims can be identified, the Police to adequately compensate those victims for the injuries suffered.