Matale Skeletal Remains On The Rise 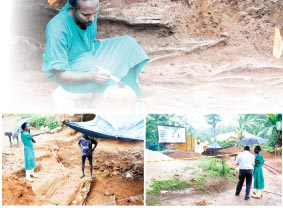 The skeletal remains that were found at the Matale District Hospital compound has put the whole nation in a state of shock, and questions are being raised about the identity of the three skeletons, and how such a gruesome act could have happened in a civil society as ours.

This brings to surface the findings of mass graves in Chemmini and Sooriyakanda in the past. Even today, there are dead bodies found all over the island. One ponders whether Sri Lanka itself has become a mass grave today.

The count of skeletons found in Matale is growing as we go to print. By last Thursday, the number had gone up to 43. According to Matale District Hospital, Consultant Judicial Medical Officer, Dr. Ajith Jayasena, more skeletons may be found in the coming days. “If so, this will be the biggest mass grave ever found in the history of Sri Lanka,” Dr. Jayasena said.

It is interesting to note that certain media has being quick to say that the skeletal remains found were over 40-years-old – connecting them to the mass killings that took place during the Janatha Vimukthi Peramuna (JVP) insurrection in 1971.

Dr. Jayasena questions the credibility of the rumours. He asks how the media could come to such hasty conclusions, even before any investigations have concluded.

Residents of Matale are also of the same opinion. They refute the claim that the crime is related to the 1971 insurrection as, to their knowledge there was no such large-scale killings in Matale during the period. This was confirmed by people of that era.

The possibility of the graves being connected to the horror period of 1988-89 is strong. At that time, the most violent killings took place in the Southern Province, and the Kandy and Matale Districts. The residents of Matale confirm the fact that there were army camps and torture chambers in the District Hospital, Vijaya College, the site where the Matale Rest House and Koombiyangoda Temple are situated, as well as several other places in Matale. It is also reported that the Gajaba Regiment of the army was in charge of the area at the time.

Vijaya College is 100 meters from the Matale District Hospital. The Matale Police are stationed nearby.

When The Sunday Leader visited the scene, there was a slight drizzle and the whole area was muddy. The police were guarding the place and investigations headed by Dr. Jayasena, were on.

According to Dr. Jayasena, in 2010, there were two biogas units constructed for the hospital kitchen. The hospital, with the intention of building its third biogas unit, had given the contract to a private company. The company had started using the backhoe on the site on November 24. Over 90% of the site had been excavated when the skeletal remains started emerging.

The technical officer who was in charge of the excavation had immediately reported the findings to the Matale Hospital, Medical Superintendent, Dr. Arjuna Tilakaratne.

Following this, Dr. Jayasena was called in to investigate the matter on November 26. When Dr. Jayasena visited the site, he learned that the foundation stone had been laid on the same day.

Each grave carried a number on a cardboard token marked chronologically counting up to 43. They reminded one of skeletal remains of a herd of animals that had been buried hurriedly.

It was plain that the bodies had been buried without any respect for human kind. Is it possible, this was a horror chamber that buried its inmates in mass graves? As we were looking at the huge grave, we got the feeling that the dead, and those responsible for their deaths, were staring back at us.

The scenario was morbid and gloom enveloped the whole area.

The Sunday Leader met Loku Banda Herath (80,) a male hospital attendant, who worked in the hospital during the period 1951 to 1987.

He claims, his father, Herath Mudiyansalage Kiribanda, who was also an attendant in the same hospital before his time, said many people had died of contagious diseases, such as small pox, and that the hospital authorities had buried those bodies within the hospital grounds.

Another person who had an opinion on the matter was U.R. Muthubanda, an ardent JVP member who was connected to the 71 JVP insurrections. He said, “In 1971, the government and the JVP had direct confrontations only, and there was no mass genocide. To my knowledge, no such killings took place in Matale,” adding that it could have taken place after.

Whatever happened, the real cause of death can be determined only by the authorities, who are intent on the investigation. Dr. Jayasena said, as a responsible officer, he always looks for a second opinion. He has been authorized by the District Court to investigate. “We have called the archaeologist and ecologist to investigate the skeletal remains,” he said.

Obstruct ion of investigation
Dr. Jayasena chides the media for coming to uncalled-for conclusions. “They have been saying that the skeletons are over 40-years-old, and belong to patients who had small pox. It is a lie,” he says, adding, “They say such things to obstruct the investigation.”
He says that all the skeletal remains that were unearthed, are being put into cardboard boxes and kept in a safe place.

“It is important to find the cause of death and the period this happened. The investigations are still going on. I refute all rumours and suggestions,” he said.

According to Dr. Jayasena, a civilized society does not bury its dead disrespectfully. “We can judge a society by how it buries its dead. If a society gives a respectful burial to its dead, then it is a civilized society,’ he said. He reiterated that this is obviously a part of a huge crime against humanity.
Dr. Jayasena also maintains there is information that he cannot share with the media at present. “I will be mentioning the findings in my final report at the conclusion of the excavation, to the judicial authority. I don’t fear to tell the truth. The findings of the investigation will be published as a public report.”

Lokubanda Herath (80), Attendant, Matale District Hospital said, “My father, Herath Mudiyansalage Kiribanda, was a male attendant at the Matale District Hospital during the years 1945 to 1947. I was only 16-years-old. My father used to go to work in the mornings and come home in the evenings, when suddenly he stopped coming home. He began staying overnight in the hospital. I learnt that he was banned from coming home to his family due to a contagious disease that had brought many patients to the IDH (Infectious Disease Hospital), where he was employed. We learnt that a serious illness called small pox, had gripped the people and the hospital authorities were trying their best to contain the disease from spreading. I remember I used to walk to the hospital to collect my father’s salary. There were always police guards on either side of the path leading to the hospital, and I was not allowed to meet my father. The government looked after all our needs. He came home after three months and then we learnt that there had been a number of deaths and that the hospital authorities had not given the families the bodies, but had buried them in a mass grave. They did not take the bodies too far, but dug a grave and buried all the dead and put alu hunu on top and levelled the grave.
At that time, the hospital had only 12 wards and the surrounding area was uninhabited and there were no buildings like today. My opinion is that these bodies belong to that era.”
—————————————-
“These skeletal remains are of those who were killed during the period 1988/89” – Anura Kumar Dissnayake (JVP)
During the 1971 insurrection, there were no mass murders. Therefore, we are convinced that these skeletal remains are of those who were killed during the period 1988/89, when state terrorism was at its height. We call on the government not to sweep this under the carpet, but make a full investigation and reveal the truth. Those responsible should be brought to justice.
Those who are responsible for the murders are those who are now holding high positions in this government. If the government is not doing a thorough investigation on this matter, the government has to take responsibility for these killings.
—————————————-
“I don’t fear to tell the truth” – Dr Ajith Jayasena
They have been saying that the skeletons are over 40-years-old and belong to patients who had small pox. It is a lie. They say such things to obstruct the investigation. It is important to find the cause of death and the period this happened. The investigations are still going on. I refute all rumours and suggestions. I will be mentioning the findings in my final report at the conclusion of the excavation to the judicial authority. I don’t fear to tell the truth. The findings of the investigation will be published as a public report.”