Massege behind the award to Sandya: IC will not forget! 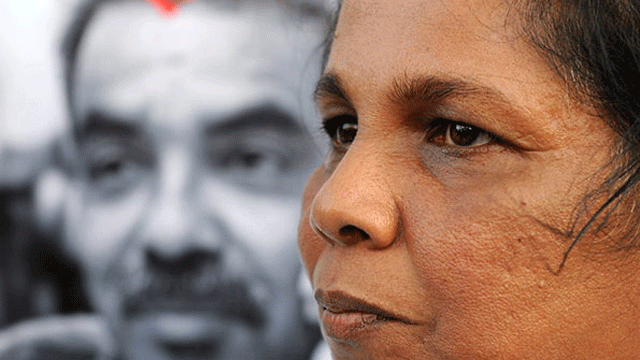 One of Sri Lanka’s most prominent advocates on behalf o missing persons, Sandya Ekneligoda, has received international recognition by being awarded the International ‘Women of Courage’ award, presented by the U.S State Department. The International Women of Courage Award is an American award presented annually to women around the world who have shown courage and leadership, while advocating for peace, justice, human rights, gender equality and women’s empowerment at personal risk.

The National Peace Council congratulates Sandya on this award which is the result of long years of commitment and fearless advocacy on behalf of all who have gone missing in the course of past several decades of violent internal conflict in Sri Lanka. Ever since her husband the cartoonist Prageeth Eknaligoda, a public critic of human rights violations, disappeared in January 2010, just a few days prior to the 2010 presidential election, Sandya has been searching for him and and joining civil society efforts that call on the government to locate missing persons. She is a symbol of many others, numbering many thousands, who are missing their loved ones and cannot rest until they know what happened to them.

The award presented to Sandya by the US First Lady is an indication that the international community has not forgotten this incident nor will it do so. Despite the change of government in 2015, the investigations into the disappearance of Prageeth, and others who went missing, have been proceeding slowly and in fits and starts. The sooner this matter is concluded will enable the government to deliver on one of its commitment made to the UNHRC in October 2015.

In August 2016 the Sri Lankan parliament approved legislation to establish an Office of Missing Persons which the government had pledged in October 2015 during a session of the UN Human Rights Council in Geneva. However, more than 8 months later, this office which is intended to address the problem of missing persons has yet to be established. At the last session of the UNHRC in March this year, the government was given a 2 year extension to deliver on its commitments made in October 2015.

The National Peace Council urges the government to establish and operationalise the Office of Missing Persons without further delay. This will only be the first of the four reconciliation mechanisms that the government pledged to establish in October 2015, the Truth seeking Mechanism, Office of Reparations and Judicial Accountability mechanism. We also take this opportunity to remember all who campaign for truth and justice with regard to the disappeared and those in civil society and the international community who help them to raise their own demands.