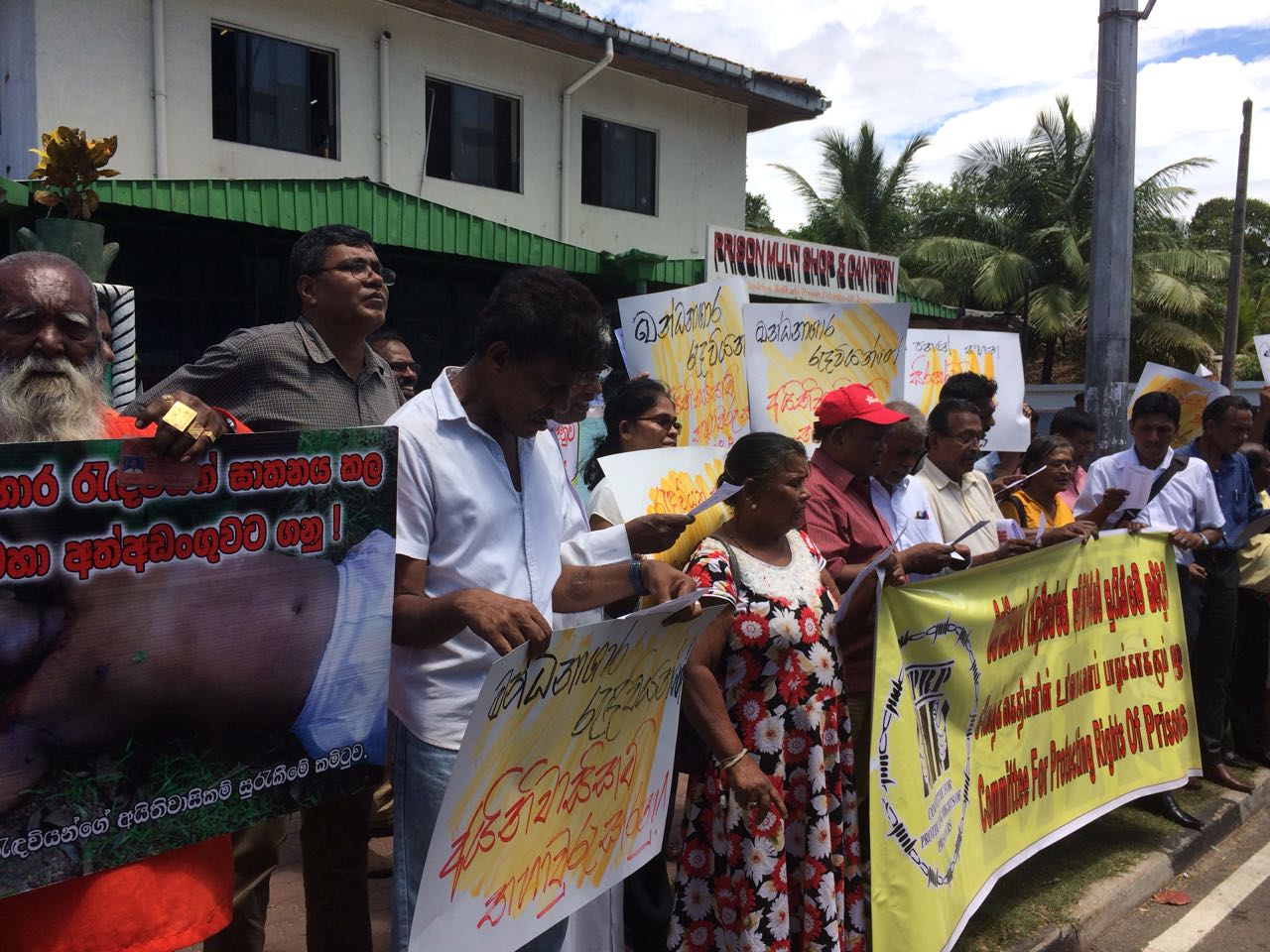 Image: Activists protest in front of the prison calling for justice for the massacre. (SLB photo)

The Attorney General yesterday assured that the investigation into the alleged killing of 27 inmates of the Welikada Prison in December 2012 would be conducted in a transparent manner, following which a progress report will be submitted.

Senior State Counsel Madhava Tennekoon, appearing for the Attorney General, informed Court that there were inquiries conducted by teams from the Special Task Force, Army and prison officers.

He said that a fresh investigation is being conducted by a team of police officers appointed by the IGP and 75% of the investigation has been completed and sought permission for another four to six weeks to complete the entire investigation.

Counsel K.S. Ratnavale, appearing for the petitioner, pleaded that the investigation should be conducted in a transparent manner and its progress should be conveyed to Court.

The writ petition was filed by W.S. Nandimal Silva seeking an investigation into the alleged killing of 27 inmates of Welikada Prison in December 2012 where it is alleged that the Army, STF, TID and Prison Intelligence stormed the prison and opened fire.

The petitioner, claiming that he was a direct eyewitness to the incidents which occurred on 9 and 10 November 2012, cited the Commissioner General of Prisons, CID Director, IGP, Minister of Prison Reforms, Rehabilitation, Resettlement and Hindu Religious Affairs and the Attorney General as respondents.

The petitioner is 45 years old and was an employee of the Railway Department from 1994-2007. On 25 June 2007 he was arrested and charged under the Prevention of Terrorism Act (PTA) and was in remand custody at Welikada Prison from 2009. As the confessions were rejected by the High Court, the indictments were withdrawn by the Attorney General consequent to which the petitioner was released from prison on 19 September 2013.

While in remand custody, he claims he saw the incidents which occurred on 9 and 10 November 2012 during which 27 inmates of the Welikada Prison were killed.

The petitioner states that on 9 November 2012 at about 1.00 p.m., he and other prisoners at Welikada Prison received information that personnel from the Army and STF were about to enter the prison to conduct a search operation.

He stated that there was an argument between prison officials and a contingent of Terrorist Investigation Department (TID) and Special Task Force (STF) personnel waiting at the gates of the prison on the procedure related to search operations.

The prison officials had objected to the entry of TID and STF personnel armed with firearms without prior permission being sought.

The TID and STF officials insisted that this was an order issued by the Secretary of Defence and therefore such protocols were not necessary.

However, at this stage, Chief Jailor Indika Sampath, who was attached to the Intelligence and Security Division and is presently an Assistant Superintendent of Prisons, intervened and stated that he would take responsibility and asked to allow the TID and STF personnel inside while the prison officials on duty had lodged a log entry regarding this irregular entrance into the prison by outsiders.

He states that soon after gaining entry into Welikada Prison, the STF, TID and prison Intelligence unit personnel had gone into ‘L’ hall and assaulted the prison inmates with the intention of provoking them.

As the prisoners had not retaliated, they moved into Chapel Hall, where the convicted prisoners were kept.

At this stage, the STF and Prison Intelligence, carrying weapons and tear gas canisters, surrounded the building. As tear gas was directed even close to cells, several inmates fell unconscious. Other inmates were rounded up and assaulted. This went on for a few hours.

He states that at around midnight the STF, TID and Prison Intelligence stormed the prison and started shooting. The petitioner, who was in L Hall, saw a prisoner named T.H. Lesely De Silva shot dead. The petitioner and other prisoners got to know that inmates Jothipala, Kapila, Manjusri and Marlon were brought in from Chapel Ward to M Ward and shot. These prisoners were heard screaming and shouting before they were shot dead. TID and Intelligence units gave updates of what was happening with the purpose of intimidating the prisoners, he reveals.

The petitioner had seen an officer in a yellow T-shirt whom he later got to know as one Rangajeewa, a former member of the Narcotics Division of the Police, armed with a pistol. He had asked for one Thushara alias Kalu Thushara. There were several prison officers, including the Commissioner General of Prisons P.W. Kodippili, inside the prison at that time, together with the said police Narcotics Unit officer Rangajeewa, he alleges.

The petitioner saw Thushara being dragged to the floor and shot near the gate. The petitioner had personally seen the body of Thushara the next morning and it had gunshot injuries to the neck. At about 6.00 a.m. the petitioner and other prisoners saw Amila Malik Perera, alias Konda Amila, being taken away in handcuffs and subsequently the petitioner got to know that Amila had also been killed.

He states that the prison was in the control of the Army until 10.00 a.m. on 10 November 2012. By that time 27 of the prison inmates had been killed by STF, Army, TID and Prison Intelligence officers, he says. The petition made a complaint to the Criminal Investigation Department on 2 February 2015 over the incident.

It had also been reported that a store which contained prisoners’ belongings, including jewellery, that were to be returned to them upon their release, had also been ransacked along with many valuable items during this planned attack by the STF, TID and Prison Intelligence.

He states that there had been an inquest held in the Magistrate’s Court of Colombo, however, these proceedings have yet to conclude.

There have been several commissions that had been appointed to inquire into the deaths in prison, however, none of these commissions had the mandate to investigate and prosecute perpetrators.

He complains that although four years have lapsed since the brutal killings of these prisoners, no action has yet been taken by the Police or the Attorney General to conduct an investigation and prosecute the offenders.

The petitioner states that the dead prisoners were kept in prison in fiscal custody on the orders of the Judiciary. He contends that it is the Judiciary which has the supreme duty to supervise, oversee and be in control of the affair pertaining to the prisoners.

He laments that often their application for bail is rejected by the Judiciary and consequently their remand is extended. He underlines that when the lives of prisoners are endangered, the Judiciary is under obligation to call for an investigation into such incidents and make appropriate directions.

He states that the report recently issued by the UN High Commissioner for Human Rights has cited the Welikada Prison massacre among other cases in Sri Lanka and has drawn the attention of the Government to the fact that no justice has been provided for the victims.

He alleges that the Criminal Investigation Department and the Police Department have neglected to perform their duties according to the law and have failed to even launch basic investigations leading to the prosecution of the offenders.

The conduct of the prison authorities in failing to prevent outsiders from entering the prison and committing the alleged atrocities should be made the subject of a credible investigation by the CID, he asserts.

He is petitioning court to issue a Writ of Mandamus on the second and third respondents commanding them to commence legal investigations into the incidents. State Counsel Maithri Amarasinghe appeared for the State.
FT