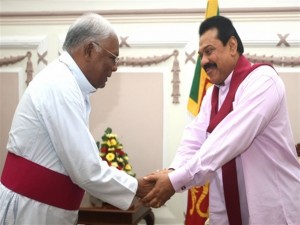 Easwaran Rutnam
It was an issue which threatened to boil over. An issue which from a sign of hope was about to turn tables. But in walked the peace maker who stressed on bringing in sanity before self.

Mannar Bishop Rayappu Joseph, last week prevented what seemed destined to be a serious rift in the Tamil National Alliance (TNA).
The TNA had only recently secured a resounding victory at the Northern Provincial Council (NPC) elections giving hope, not just to the Tamils but also the international community, including India.
However those hopes were almost dashed after nine elected TNA members of the Council refused to take oaths before Chief Minister C.V. Wigneswaran.

Some party members were angered over Wigneswaran’s decision to take oaths before President Mahinda Rajapaksa while others had issues with the composition of the NPC Ministries.

The nine members representing the EPRLF, TELO and PLOTE, all constituent members of the TNA, decided to take oaths at Mulivaikall where hundreds of civilians were believed to have been killed during the final stages of the war.

However last Monday, the day the oaths taking ceremony of the nine dissidents was set to take place, only TELO member M.K Shivajilingam took oaths in Mullivaikal.

Bishop Rayappu Joseph had mediated and managed to convince the other eight not to take oaths in Mullivaikal. Instead by last Friday seven members took oaths at different locations in the North and in Colombo.

The outspoken Bishop who is best known as a Tamil human rights advocate, had told the TNA members not to leave room for the golden opportunity at hand to go to waste.

The Bishop told The Sunday Leader he had no issues with Wigneswaran taking oaths before the President and went further by saying “that is the best thing he did”.

“He is the President of the country so there is nothing wrong with the Chief Minister taking oaths before the President. There were differences of opinion among some TNA members and supporters about this but we will settle that matter. In the end sanity needs to prevail,” the Bishop said.

JVP leader Somawansa Amarasinghe said that the TNA was fighting for Ministerial posts and not addressing issues faced by Tamils.

He said that although the TNA claims they are representatives of the Tamils they are not really concerned about Tamil issues.

The JVP leader was of the opinion that those who fight for separatism cannot really understand the needs of the people.

The JVP also noted that the TNA had not even objected to the Indian power project in Sampur, Trincomalee despite Tamil civilian land being acquired for the project.

However Bishop Rayappu Joseph said he is confident the TNA will be able to address the issues faced by the Tamils and will need to work with the government to achieve that goal.

The Bishop also says he is confident the TNA will be able to work towards self determination of the Tamils.
“We are a people who have rights. We need power sharing. Our fundamental aspiration is power sharing. Development is second. That is not the main issue. We will be happy if the core issues are addressed. We are now treated like third class people. W should be given real respect and political rights,” he said.
Bishop Rayappu Joseph was at one time seen by the government as being a strong supporter of the LTTE and pushing for a separate state.

The Bishop however insisted he was never for a separate state and had even objected to the violence committed by the LTTE.

“When the LTTE started they were good. But later they took up arms. They took up arms as a last resort when all our political attempts to recognize Tamil rights were suppressed. But I don’t justify violence, I condemn it. I do not accept what the LTTE did by using arms and killing people,” he said.

The Bishop says the government must address Tamil issues and cannot deviate attention from the core issues faced by Tamils.

He claims during the last eight months of the war 146,679 people have not been accounted for in the North and there needs to be accountability for those people.

“I was question by CID on this once. I gave the documents I have to prove the figure,” the Bishop said.
He accused the government of suppressing the Tamils and penalizing them by taking over Tamil land and colonizing Tamil areas.

Prior to the recent Northern elections several Muslim groups in Mannar had raised concerns over the Bishop and accused him of creating a division between Muslims and Tamils.

However Northern Province Chief Minister C.V. Wigneswaran had last week called for unity in the North, especially among the Tamils and Muslims.

Speaking after visiting a Mosque in Jaffna, Wigneswaran said that Tamils and Muslims must join hands to make a change in the North.

Wigneswaran said he is keen to work with the Muslims and that the time has come for religious differences to be put aside and people to live as people.

“Those who have faith in God should place humanity first and live together with others,” he said.

He recalled that the TNA had appointed a Muslim as a Minister in the Northern Provincial Council in order to ensure Muslim issues are also addressed.

Bishop Rayappu Joseph said there needs to be constitutional amendments which address the issues of the minorities especially the Tamils and advice should be sought from India and other countries when drafting a political solution.

“Local political solutions have never worked. There have been so many political talks but they have not yielded results. Now they don’t want to give even the smallest thing. We however will not oppose the government. We need to work together,” the Bishop said.

Asked why he is taking up the Tamil cause so strongly, the Bishop said he knows very well what the Tamils are going through and so he feels has a duty to help them.

“God became a human being and identified the suffering of the people so as a preacher I must do what God would do although I cannot compare myself with God,” he added.

Bishop Rayappu Joseph however says he is not get involved in party politics and knows where to draw the line.
The Bishop meanwhile says he does not depend on the Catholic Church to push his cause and he respects the stand they take on the issue. (Colombo Gazette)