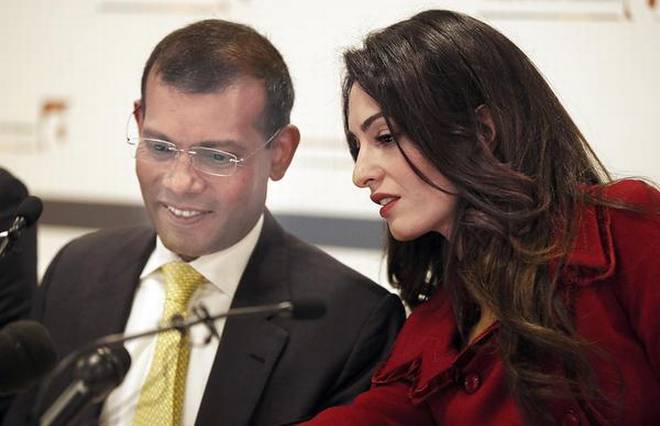 In a recent interview to a local television channel in Male, Mohamed Hussain Shareef, Male’s Ambassador-designate to Colombo, has said: “If a Maldivian authority requests me to detain and return Mohamed Nasheed back to Maldives, I will. It’s very simple. They have to say this is an individual who we are seeking. I’ll even go out to the street myself and do it… if our authorities inform me, request it of me, our embassy will enforce it.”

No ambassador is empowered to arrest any person in any country, it is only the law enforcement agencies that can arrest any person. The statement by Mr. Shareef is a violation of diplomatic code and international law as well as Sri Lankan criminal law.

In the wake of statement by Mr. Shreef, human rights lawyer Amal Clooney has urged Sri Lankan authorities to ensure the safety of her client and former President of the Maldives Mohammed Nasheed.

Responding to his comment, Ms. Clooney has said that any attempt by a Maldivian diplomat to detain Mr. Nasheed in Sri Lanka would constitute a violation of international law as well as Sri Lankan criminal law. “President Nasheed should not be returned to the Maldives to serve a sentence that resulted from a sham trial, and it is incumbent on the Sri Lankan authorities to ensure that his rights are respected while he is in their country,” said Ms. Clooney, according to a statement issued by Mr. Nasheed’s office. Sri Lankan authorities have not responded to the development so far.

Pointing to the arrest and deportation of a Maldivian blogger in Sri Lanka in 2015, Mr. Nasheed’s Maldivian Democratic Party  has said the Mr. Shareef’s remarks could not be taken lightly.

Mr. Nasheed, 50, was the Maldives’s first democratically elected head of state and served four years as President. He was convicted in 2015 on terrorism charges following a trial that many, including the UN Group on Arbitrary Detention, criticised.

The Maldivian government has come under sharp focus over the last year, with sections accusing the Yameen administration of turning increasingly authoritarian, a charge his government denies. In July this year, UN Secretary-General António Guterres urged the Maldives Government to refrain from acts of harassment, intimidation against parliamentarians, civil society and the media.

Edited version of an article  By Meera Srinivasanm ‘Sri Lanka should ensure Nasheed’s safety’ in The Hindu.