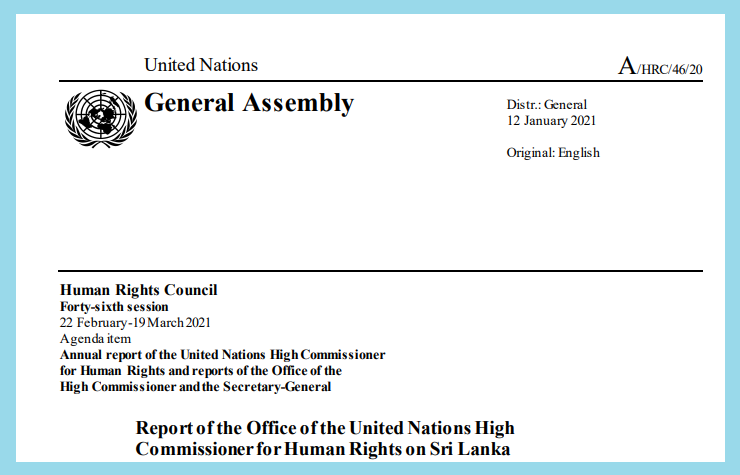 The present report is submitted pursuant to Human Rights Council Resolution 40/1 which requested the Office of the United Nations High Commissioner for Human Rights (OHCHR)to continue to assess progress in the implementation of its recommendations and other relevant processes relating to reconciliation, accountability and human rights in Sri Lanka.

While fully acknowledging the challenges posed by the COVID-19 pandemic, the High Commissioner is deeply concerned by the trends emerging over the past year, which may represent early warning signs of a deteriorating human rights situation. The report highlights that developments over the past year have fundamentally changed the environment for advancing reconciliation, accountability and human rights in Sri Lanka, eroded democratic checks and balances and civic space, and reprised a dangerous exclusionary and majoritarian discourse. These trends threaten to reverse the limited but important gains made in recent years and risk the recurrence of the policies and practices that gave rise to the grave violations of the past.

The social and economic impact of COVID 19 has exacerbated and deepened structural inequalities and discrimination. The High Commissioner believes that these early warning signals be given urgent attention by the Human Rights Council and that it should sustain its close monitoring of and engagement on developments in Sri Lanka. She also urges Member States to pursue alternative international options for ensuring justice and reparations and support a dedicated capacity to advance these efforts.

52. Nearly 12 years on from the end of the war, domestic initiatives for accountability and reconciliation have repeatedly failed to produce results, more deeply entrenching impunity, and exacerbating victims’ distrust in the system. Sri Lanka remains in a state of denial about the past, with truth-seeking efforts aborted and the highest State officials refusing to make any acknowledgment of past crimes. This has direct impact on the present and the future. The failure to implement any vetting or comprehensive reforms in the security sector means that the State apparatus and some of its members credibly implicated in the alleged grave crimes and human rights violations remain in place. The 2015 reforms that offered more checks and balances on executive power have been rolled back, eroding the independence of the judiciary and other key institutions further. The beginnings of a more inclusive national discourse that promised greater recognition and respect of and reconciliation with minority communities have been reversed. Far from achieving the “guarantees of non-recurrence” promised by resolution 30/1, Sri Lanka’s
current trajectory sets the scene for the recurrence of the policies and practices that gave rise to grave human rights violations.

53. While fully appreciating the challenges posed by the COVID-19 pandemic, the High Commissioner is deeply concerned by the trends emerging over the past year,which represent clear early warning signs of a deteriorating human rights situation anda significantly heightened risk of future violations, andtherefore calls for strong preventive action. Despite the Government’s stated commitment to the 2030 Agenda, Tamil and Muslim minorities are being increasingly marginalized and excluded from the national vision and Government policy, while divisive and discriminatory rhetoric from the highest State officials risks generating further polarization and violence.

54. The High Commissioner is concerned that the emergency security deployments that followed the Easter Sunday terrorist attacks in 2019 have evolved into an increased militarization of the State. The Government has appointed active and former military personnel, including those credibly implicated in war crimes to key positions in the civilian administration, and created parallel task forces and commissions that encroach on civilian functions. Combined with the reversal of important institutional checks and balances on the executive by the 20thConstitutional Amendment, this trend threatens democratic gains.

55. The High Commissioner is alarmed that the space for civil society, including independent media, which had widened in recent years, is rapidly shrinking. The High Commissioner urges the authorities to immediately end all forms of surveillance, including intimidating visits by State agents and harassment against human rights defenders, lawyers, journalists, social actors and victims of human rights violations and their families, and to refrain from imposing further restrictive legal measures on legitimate civil society activity.

56. The Human Rights Council, therefore, is – once again – at a critical turning point in its engagement with Sri Lanka. Twice before, the Council has leant its support to domestic accountability and reconciliation initiatives, culminating in resolution 30/1. The Government has now demonstrated its inability and unwillingness to pursue a meaningful path towards accountability for international crimes and serious human rights violations, and signalled instead a fundamentally different approach which focusses on reparation and development, but threatens to deny victims their rights to truth and justice and further entrench impunity.

57. It is vital that the Human Rights Council takes further action on Sri Lanka for three important reasons. Firstly, the failure to deal with the past continues to have devastating effects on tens of thousands of survivors – spouses, parents, children and other relatives – from all communities who continue to search for the truth about the fate of their loved ones, to seek justice and are in urgent need of reparations. Secondly, the failure to advance accountability and reconciliation undermines the prospects for sustainable peace, human and economic development in line with the 2030 Agenda, and carries the seeds of repeated patterns of human rights violations and potential conflict in the future. Finally, the trends highlighted in this report represent yet again an important challenge for the United Nations, including the Human Rights Council, in terms of its prevention function. Independent review of the United Nations’ actions in 2009 in Sri Lanka concluded there had been a systemic failure of the prevention agenda as the conflict concluded. The international community must not repeat those mistakes, nor allow a precedent that would undermine its efforts to prevent and achieve accountability for grave violations in other contexts.

58. The High Commissioner welcomes the Government’s stated commitment to the 2030 Agenda and to continue some measures of peacebuilding, reparation and restitution, but Sri Lanka will only achieve sustainable development and peace if it ensures civic space and effectively addresses the institutionalised and systemic issue of impunity. However, by withdrawing its support for resolution 30/1 and related measures, and by repeatedly failing to undertake meaningful action across the full scope of that resolution, the Government has largely closed the possibility of genuine progress being made to end impunity through a domestic transitional justice process. In view of recent trends, the High Commissioner calls on the Human Rights Council to enhance its monitoring of the human rights situation in Sri Lanka, including progress in the Government’s new initiatives, and to set out a coherent and effective plan to advance accountability options at the international level.

59. Member states have a number of options to advance criminal accountability and provide measures of redress for victims. In addition to taking steps towards the referral of the situation in Sri Lanka to the International Criminal Court, Member States can actively pursue investigation and prosecution of international crimes committed by all parties in Sri Lanka before their own national courts, including under the principles of extraterritorial or universal jurisdiction. The High Commissioner encourages Member States to work with OHCHR, victims and their representatives to promote such avenues for accountability, including through opening investigations into possible international crimes, and to support a dedicated capacity to advance these efforts. Member States can also apply targeted sanctions, such as asset freezes and travel bans against State officials and other actors credibly alleged to have committed or be responsible for grave human rights violations or abuses, as well as support initiatives that provide practical benefits to victims and their families.

60. The High Commissioner recommends that the Government of Sri Lanka:

a) Actively promote an inclusive, pluralistic vision for Sri Lanka, based on nondiscrimination and protection of human rights for all, and in line with the 2030 Sustainable Development Agenda;

b) Ensure constitutional and legislative reforms address recommendations made by United Nations human rights mechanisms and the resolutions of the Human Rights
Council;

c) Publicly issue unequivocal instructions to all branches of the military, intelligence and police forces that torture, sexual violence and other human rights violations are
prohibited and will be systematically investigated and punished;

d) Order all security agencies to immediately end all forms of surveillance and harassment of and reprisals against human rights defenders, social actors and victims of
human rights violations;

e) Promptly, thoroughly and impartially investigate and prosecute all allegations of gross human rights violations and serious violations of international humanitarian law,
including torture and ill-treatment, and give the highest priority to ensuring accountability in long-standing emblematic cases;

f) Remove from office security personnel and other public officials credibly implicated in human rights violations, in compliance with human rights standards; implement other reforms of the security sector to strengthen and ensure accountability and civilian oversight;

h) Ensure an environment in which the Office on Missing Persons and Office for Reparations can operate effectively and independently; provide both Offices with sufficient resources and technical means to effectively fulfil their mandate; and proceed with interim relief measures for affected vulnerable families with a gender focus, notwithstanding their right to effective and comprehensive reparations and rights to truth and justice;

i) Establish a moratorium on the use of the Prevention of Terrorism Act for new arrests until it is replaced by legislation that adheres to international best practices;

j) Establish standard procedures for the granting of pardons or other forms of clemency by the President, including subjecting it to judicial review, and excluding grave human rights and international humanitarian law violations;

61. The High Commissioner recommends that the Human Rights Council and Member States to:

a) Request OHCHR to enhance its monitoring of the human rights situation in Sri Lanka, including progress towards accountability and reconciliation, and report regularly
to the Human Rights Council;

b) Support a dedicated capacity to collect and preserve evidence for future accountability processes, to advocate for victims and survivors, and to support relevant judicial proceedings in Member States with competent jurisdiction;

c) Cooperate with victims and their representatives to investigate and prosecute international crimes committed by all parties in Sri Lanka through judicial proceedings
in domestic jurisdictions, including under the principles of extraterritorial or universal jurisdiction;

f) Prioritize support to civil society initiatives and efforts for reparation and victims’ assistance and prioritise victims and their families for assistance in their bilateral humanitarian, development and scholarship programs;

g) Review asylum measures with respect to Sri Lankan nationals to protect those facing reprisals and avoid any refoulement in cases that present real risk of torture or
other serious human rights violations.

a) Ensure that the Secretary-General’s Call to Action on human rights guides all United Nations policy and programmatic engagement in Sri Lanka;

b) Ensure that all development programmes are founded on principles of inclusion, non-discrimination, and support for effective, accountable and inclusive institutions, in
line with the 2030 Sustainable Development Agenda;

c) Incorporate strict human rights due diligence in engagement with the security forces and all bodies under the purview of the Ministry of Defence or the Ministry Public
Security;

Note by SLB: We publish these unedited chapters of the report, which is not yet officially published but has been leaked to Colombo media and only selected excerpts have been published in the weekend papers.