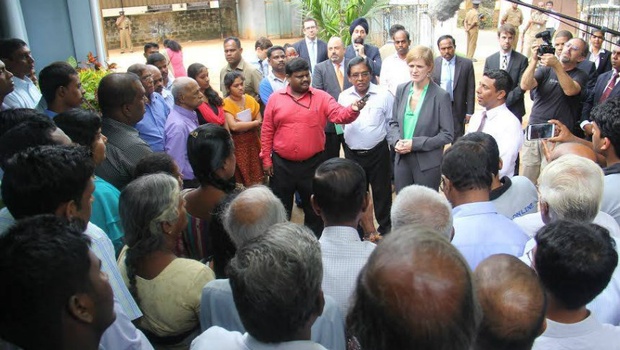 COLOMBO: The Tamil press in Sri Lanka, which was very hopeful that the UN Human Rights Council (UNHRC) would render justice to Tamil victims of Eelam War IV, has now lost faith in the international body’s commitment to the goals it had set for itself in the resolution it passed in  September-October 2015.

Despite strong and continued interest in securing international support for the Lankan Tamil cause,  the Tamil press showed “little optimism” that the on-going 32nd session of the UNHRC will yield tangible positive outcomes, says Verite Research in its bulletin on local media coverage of prominent Lankan issues in the past week.

“Low expectations were also reflected in Tamil press attitudes towards the government. While noting some positive changes overall, the press sentiment reflected discontent at the pace and extent of the changes, with many Tamil newspapers viewing the government’s efforts as an eyewash to please the international community,” the Colombo-based research organization said.

“This is in keeping with past trends where acts such as singing the national anthem in Tamil were viewed as mere symbolic acts of reconciliation on the part of the government,” it noted.

The Tamil press had a dim of the achievements in reconciliation trumpeted by the government.

“The Tamil press repeatedly censures the government for inaction in relation to matters such as not returning the lands held by the armed forces to their rightful owners; not addressing the issue of Tamil political prisoners; and not repealing the Prevention of Terrorism Act (PTA). The Tamil press fees that truth, justice and accountability should be highlighted as matters that should be prioritized even before the other issues such as the release of land are addressed,” Verite Research observed.

The Colombo and Jaffna-based Thinakkural extended the criticism of the government and the international community to the premier Tamil party, the Tamil National Alliance (TNA).

“The TNA was portrayed as not sufficiently campaigning for the rights of the Tamil community. The TNA’s seemingly closer ties with the government were viewed as an act staged by the TNA in order to please the international community,” the report said.

Looking at the Sinhala press, Verite Research observed that the “Sinhalese nationalist press” seemed unaware of the change of sentiment on the part of the Tamil press in relation to the UNHRC.

“While the Sinhala press in general did not focus much on the UNHRC session, the Sinhala nationalist press accused ‘Tamil separatists’ of canvassing support against  Sri Lanka at the UNHRC,” the report said.

Indeed, some Tamil politicians, including the high profile TNA MP, M.A.Sumanthiran, had gone abroad to press the US to see that the Lankan government implements “to the letter” the UNHRC resolution sponsored jointly by the US, Lanka and other countries in September-October 2015.
NIE