Prof. Snyder’s words are anchored to the politics and individuals in the US, but they resonate far beyond, and arguably with even greater emphasis, for us here – who are no strangers to authoritarianism in the South, fascism in the North, the cult of the personality leading to the most heinous of violence, a war on terror leading to what Asanga Welikala called ‘the normalisation of the exception’ through draconian laws arbitrarily imposed, the suspension of rights, the evisceration of democratic institutions and the overall dismantling of democracy in the guise of patriotism, safety and economic development.

The book captures a disturbing case-study of what political theorist Hannah Arendt had earlier called ‘the banality of evil’. The example is around an experiment conducted in the 60s by Yale psychologist Stanley Milgram, who wanted to explore if there was in German society an authoritarian tendency that allowed the Nazis to do what they did, and how they did it. He failed to get permission in Germany for the experiment, and thus did it in Yale University itself. The experiment asked a group of students to give what they thought were electric shocks to individuals in an experiment about learning. There was in fact no electric shock. Prof. Milgram had asked the group who would act as respondents to pretend they got a shock. Despite visible trauma and pain, leading to in some cases, feigned death, the students asked to administer the electric shock continued to do so, just because Prof. Milgram had asked them to do so. The students were complete strangers to each other, and had no grievance against each other. No student, upon leaving the experiment, had asked what the condition of the respondent was. As Prof. Snyder notes, “Milgram grasped that people are remarkably receptive to new rules in a new setting. They are surprisingly willing to harm and kill others in the service of some new purpose if they are so instructed by a new authority. ‘I found so much obedience,’ Milgram remembered, ‘that I hardly saw the need for taking the experiment to Germany.’ 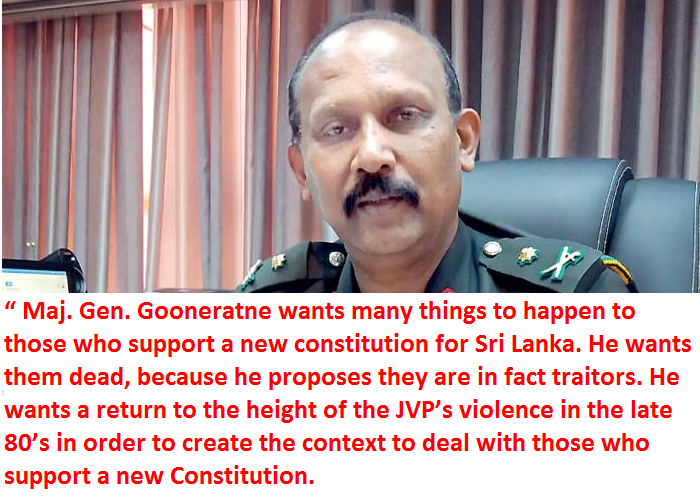 One of the shortest chapters in the book also holds a key lesson for Sri Lanka, on usurping democratic institutions for authoritarian or fascist goals. As Prof. Snyder avers, ‘Sometimes institutions are deprived of vitality and function, turned into a simulacrum of what they once were, so that they gird the new order rather than resisting it. This is what the Nazis called Gleichschaltung.’

The final minutes of Maj. Gen. Kamal Gooneratne’s speech at Viyathmaganeeds to be appreciated in light of Migram’s experiment and Arendt’s observation. Maj. Gen. Gooneratne wants many things to happen to those who support a new constitution for Sri Lanka. He wants them dead, because he proposes they are in fact traitors. He normalises death to traitors as something natural, and inevitable. He wants a return to the height of the JVP’s violence in the late 80’s in order to create the context to deal with those who support a new constitution. His desire to punish traitors extends post-mortem. Mirroring the humiliation the JVP meted out to its political opponents even after being murdered, he wants those who were in favour of a new constitution to not even be given a proper burial. He doesn’t want Buddhist priests to bless them or to even visit their homes. All this is said in a matter of fact way, with Gotabaya Rajapaksa and many other luminaries present, front-row. To this day, Viyathmaga as a movement and idea associates itself completely with these sentiments.

Perhaps not to be outdone, MP Weerawamsa proposed that Parliament should be bombed if members do not object to the new constitution. It is a pincer movement. Maj. Gen. Kamal Gooneratne creates the conditions, supported by the regard, respect for and recognition of Gotabaya Rajapaksa amongst professionals in the country, a violent rebellion against political reform that the JO has no other means to defeat democratically. It is a careful construct of emotion and fear, a post-truth concoction intended to escalate calls for, and then justify, violence. Weerawamsa seeks to erode public trust and confidence in a democratic institution – Parliament – complementing Viyathmaga’s larger goal as setting itself up as, including primarily those in it, the selfless saviours of a country destroying itself over what by then will be projected as an entirely unnecessary, divisive construct – the new constitution.

Vigilance is called for, and vigour in a spectrum of responses that nips in the bud a political project that will, no matter how incredible it seems today, risk everything good and great about a democratic Sri Lanka. Online and over social media, Weerawamsa and Maj. Gen. Gooneratne were called many things. Whatever our responses are, name-calling and projecting them as fringe lunacy isn’t going to work. It will make them stronger. It will make Viyathmaga stronger. Everybody loves an underdog. We are right in being appalled but wrong in projecting our anger at a specific set of individuals and use against them, the same language and violence they seek to unleash on us. Lest we forget, when Maj. Gen. Gooneratne called for traitors to be killed, the audience present clapped loudly. When he called for the humiliation of those who were murdered, even after death, the audience clapped loudly. Weerawamsa says what he does, and will get away with it, because the language of inflicting violence against political rivals, and those who are different, in any way, is now mainstream. Even war, by those who lead it, is seen as a last resort, not a first response. In Sri Lanka, this is now inverted, and calls for the public to turn violent so frequent and banal, we gloss over it.

In Rwanda, just before the genocide, Radio Télévision Libre des Mille Collines (RTLM) normalised violence against and the murder of friends, neighbours, partners, colleagues and random strangers. In the US today, the incumbent President’s words during his election campaign and after taking office have strengthened neo-Nazis, amongst others. What is said, is often the frame through which we see and engage with the world. If words by influential individuals and political movements incite hatred and violence, the invisible victim is a contest of ideas.

This ultimately isn’t about a new constitution, and whether one supports or opposes it. It is about the freedom to articulate an idea or thought that contests popular wisdom or the mainstream. It is about the ability to contest a construct by those in power, by those who aren’t from the same camp. It is about the kind of Sri Lanka we want. Viyathmaga’s political project is to weed out, violently, everything and everyone who it thinks is inconvenient. The end – a prosperous country albeit in fear and conformist – is a Faustian bargain Gotabaya and his ilk propose as desirable. He has many who support him. For them, by virtue of nothing other than seeking a new political order and its fullest expression through a new constitution, we are fit to be tortured and killed.

Let’s all reflect on that, and how this sentiment today will play out over 2018 and beyond.