Key elements for a follow-up resolution on Sri Lanka – HRW 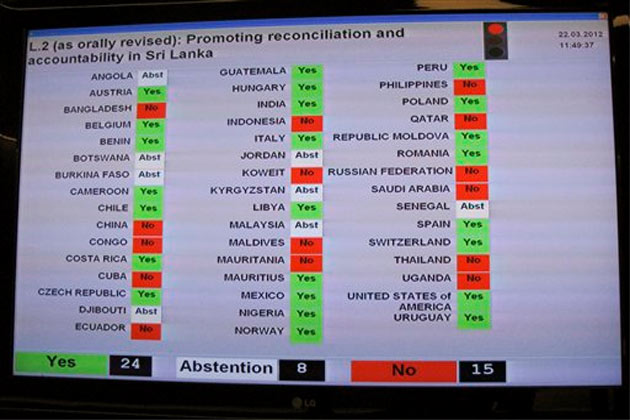 Image: The screen shot of voting at UNHRC on Sri Lanka resolution, 2012.

To Permanent Representatives of Member and Observer States of the UN Human Rights Council.

We write to seek your support in ensuring that the upcoming consideration of Sri Lanka’s progress toward implementing its commitments under United Nations Human Rights Council resolution 30/1 accurately and substantively reflects the situation within the country. This includes both progress to date and the significant challenges remaining. At the end of this letter, we outline what we would consider to be the minimum key elements for a credible follow-up resolution.

As you know, this resolution, adopted by the Council in October 2015 through consensus, contains 25 key undertakings by the Sri Lankan government across a range of human rights issues. We acknowledge at the outset the positive steps taken by the government to date. Four UN Special Procedures, plus the UN High Commissioner for Human Rights, have visited Sri Lanka since the resolution was adopted. By all accounts, their visits received government cooperation, and they were unhindered in their movements and meetings. Two nationwide consultations have been carried out, one on constitutional reform and the other on transitional justice. The government has released some reports from previous government commissions of inquiry into wartime abuses, and established coordination offices to deal with transitional justice and reconciliation issues. Importantly, the government in May 2016 ratified the International Convention for the Protection of All Persons from Enforced Disappearance.

However, we remain concerned about the government’s actual willingness to fully implement all aspects of resolution 30/1. A key element of the resolution consists of transitional justice promises: a special court including international judges and prosecutors to try cases of war crimes by all parties to the conflict, an office on missing and disappeared persons, a truth-seeking and reconciliation mechanism, and a reparations mechanism. The government has made only halting progress towards fulfilling these commitments. A hastily drafted and passed law to establish an Office of Missing Persons was done without thorough consultation of key stakeholders, and the office has yet to be set up. The three other promised mechanisms have not made significant progress. Reliable reports indicate that the government team working on these three mechanisms has prepared draft legislation but as yet they have not been shared with stakeholders.

A report issued by the government-appointed Consultation Task Force (CTF), which conducted extensive nationwide consultations on the transitional justice mechanisms, should be given the attention it deserves. The CTF report contains specific detailed recommendations, drawn from all affected communities including the security services, and provides an important blueprint for the way forward. The government may be commended for mandating these wide-ranging consultations, and should be encouraged through the anticipated Council resolution to engage with the CTF report’s findings and give due consideration to implementing its recommendations. To do otherwise would be tantamount to a dismissal of victims’ voices. It was the victims’ rights groups that sustained a diligent campaign over many years that helped to make resolution 30/1 possible. The CTF report and its recommendations should be at the forefront in the design of Sri Lanka’s promised four transitional justice mechanisms.

An additional note of concern on Sri Lanka’s progress on transitional justice is its ongoing resistance to any foreign involvement in the four mechanisms. Government officials, including the president and cabinet members, have been increasingly unwilling to consider significant international involvement in the justice mechanism. This directly contravenes the call by the UN High Commissioner for Human Rights for a “hybrid” justice mechanism given the shortcomings of domestic institutions to ensure impartial investigations and witness protection, and the Sri Lankan government’s failure to take meaningful accountability measures since Sri Lanka’s civil war ended in May 2009. Resolution 30/1affirms the importance of participation in a justice mechanism of “Commonwealth and other foreign judges … and authorized prosecutors and investigators.” It is a core component of the resolution, which the Sri Lankan government embraced through its co-sponsorship, and an important recommendation of the CTF.

In addition to the lack of progress on the transitional justice mechanisms, Sri Lanka has not implemented many of the other undertakings from the resolution. Security sector reform, including repealing and replacing the draconian Prevention of Terrorism Act, has not yet been undertaken. More favorably, the government has removed the police from under the purview of the Defense Ministry and created a separate Law and Order Ministry, and the president reportedly issued directives to the security forces to abide by the law in its treatment of arrested and detained persons. However, a January 2017 report by the UN Special Rapporteur on torture, based on a May 2016 visit, confirms the findings of Human Rights Watch and other organizations that torture is endemic to the security forces and that a culture of impunity is entrenched. The Special Rapporteur’s full report will be discussed at the Council session.

While the government has made some important symbolic steps towards reconciliation between the minority and majority communities, a February 2017 report by the UN Special Rapporteur on minority issues, also being presented for consideration at the Council this session, highlights the ongoing marginalization and misrepresentation faced by Sri Lanka’s minority communities, as well as a trust-deficit between these communities and the government, due in significant part to a culture of impunity.

We understand that the government has had only 16 months to fulfill the many pledges contained in resolution 30/1. However, government statements and inaction increasingly point to a dwindling political will to implement the resolution’s key components. The Council has played a crucial role in identifying the many steps needed to reconcile with the past, ensure justice and accountability, and implement necessary reforms. It is imperative that the Council remain fully engaged with the process until the commitments Sri Lanka made to the Council and UN member states and its own people through its co-sponsorship of resolution 30/1 are fully met.

We anticipate that the High Commissioner will present a robust and substantive report on the progress towards implementation of the resolution, and the many challenges remaining. In order to maintain confidence in the process, the follow-up resolution this session will need to engage meaningfully with the High Commissioner’s report and the other reports and recommendations that will be before the Council.

At a minimum, the resolution should:

Anything less would fall substantially short of the expectations of victims, and risk undermining faith in the process long before the promises of reconciliation, justice and reform have been translated into reality.

We urge your delegation to support the inclusion of these elements in the resolution.