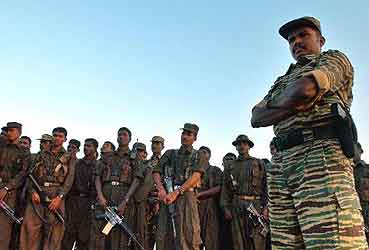 They are not only crimes punishable under Penal Code of this country but also universal crimes against humanity.

Murders of monks and surrendered policemen are not collateral damages but outright murders.

It is incumbent and imperative duty of the law enforcement agencies to investigate and take action.

Crimes of this nature do not get prescribed.

The Sri Lankan government can make a complaint against Karuna.

Former trial attorney at The Hague’s International Criminal Tribunal (ICC) and senior counsel Anura Meddegoda said that Vinayagamoorthi Muralitharan alias Karuna Amman, LTTE’s renegade leader turned politicians should be tried for war crimes. President’s Counsel Anura Meddegoda with nearly four decades of experience in legal practice both in the official and unofficial bars and the international courts, said the Sri Lankan government must complain to the Hague’s United Nations International Criminal Tribunal for the crimes militant turned politician has committed against humanity. In an interview to Daily Mirror, the senior attorney said there are number of instances where former National List UPFA parliamentarian and Minister Karuna Amman alleged to have committed murder and crimes that fall under the category of war crimes and crimes against humanity. In his long legal career Mr. Meddegoda has served nearly 20 years at the Attorney General’s department as a Senior State Counsel and in 1994 he joined The Hague’s United Nations International Criminal Tribunal’s Office of the Prosecutor as a Legal Adviser and served there for 10 years. In 2004 he was appointed as the Secretary to the Justice and Judicial Reform Ministry but he did not accept the post due to his commitment with The Hague.

Q. The recent statement made by former Minister and politician Karuna Amman has gone viral and he has come under severe criticism. As a senior lawyer with international experience what is your view on this?

Karuna’s statement is serious and Karuna on his own admission says he has killed 3000 to 4000 people, police and soldiers.
That is a serious criminal offence. I believe it is a war crime and a crime against humanity. If Karuna says that he did it in the cause of the conflict which he said to have stated in a statement in Ampara, it is imperative that the law enforcement authorities conduct an investigation into that statement. In order to do that the first step would be for them to record a statement from Karuna. I understand that it has been done now. Whatever Karuna says in his statement they can easily identify the events and incidents, in the cause of which Karuna says he has committed these serious crimes. These are all recorded incidents. Sri Lanka Minister of Defence, Sri Lankan police, Sri Lanka law enforcement authorities would have recorded a series of events from 1983 to 2008 during the time of the conflict. And Karuna says that this happened in 1990s or and thereafter.

One such incident I can remember is the massacre of Aranthalawa Buddhist priests. That is a recorded event and that is a serious crime. It is a heinous crime and also the police officers at the Batticaloa police station who surrendered were alleged to have massacred by Karuna and there are various other incidents of killings of soldiers. And these are crimes that are known to the law enforcing authorities of this country.

Q . These may be crimes against the law of this country. But could they be tried in an international court of law?

They are crimes punishable under Penal Code of this country but they are also universal crimes which are crimes against humanity. Although Sri Lanka is not yet a party to the international statutes of the International Criminal Court when a person makes allegations, the Sri Lanka law enforcement authorities are mandated because Sri Lanka is a part of the United Nations and also Sri Lanka which abide by the rule of law. It is incumbent and imperative duty of the law enforcement agencies to investigate and take action. These are crimes committed in the cause of a conflict so therefore they become war crimes and also they become crimes against humanity.

Q. But some ruling party politicians say that these crimes were committed while he was fighting a war against Sri Lankan military?

When Batticaloa police officers and men who surrendered were killed that is not collateral damage but outright murder. Therefore there is a distinction which politicians do not seem to understand or they refuse to understand for the reason that Karuna is on the side of the present ruling party. They seemed to be making attempts to push this under the carpet and they are trying to soft-pedal the statement made by Karuna.

Q .But these crimes were said to have happened years ago. Isn’t there a time bar?

That is not what the law is. There is no prescription against crimes of this nature. They can be tried at any pointed time. For serious crimes in the nature of murder, treason and the crimes against the state there is no prescription lies. So whether it happened in 1995 or 900, the offenders can still be tried. There was one Minister who was saying that this happened long ago therefore this will not be an issue, that is wrong. That is not the correct legal point. The correct legal perspective is in terms of the Criminal Procedure Code of this country. Prescription does not run. Crimes of this nature do not get prescribed. For that reason they ought to investigate it and I have in fact made public certain comments on social media that this is a matter which will qualify to fall within a war crime and a crime against humanity. This must be tried by the International Criminal Court and it is their incumbent duty and it is imperative for the government of Sri Lanka to investigate this matter and report it to the international criminal court that this man is a war criminal and can be tried by the international criminal tribunal.

Q. Do we have instances in the world where similar cases were tried by International courts?

It was only three days ago that the international criminal tribunal indicted the Present President of Kosovo. The incumbent President of Kosovo Hashim Thaçi was indicted just three nights ago. He was the leader of the Kosovo Liberation Army in 1995/1996. And Kosovo Liberation Army was fighting for independence of Albania. And in the cause of that there were people who were killed. There was a conflict and in the cause of conflict many people were killed. Kosovo became independent and this man later became the President of the country and he is still the President. Now Kosovo despite the fact that he is the incumbent President of Kosovo the International Criminal Court upon a complaint that was made that he led the Kosovo Liberation Army and in the cause of which about a hundred people were killed where this incident took place between 1994 and 1995, 25 years ago. The tribunal has investigated and he had been indicted for war crimes and crimes against humanity.

It is in the same way that the Sri Lankan government also should take a feather from the cap of International Criminal Court and move forward in the direction of prosecution of Karuna and not having Karuna being given nomination to contest elections.

Q. Does only the government have the right to make a complaint to the International Criminal Court?

Q. Is there any possibility where an individual, a political party or civil rights organisation could make a complaint to the ICC?

Q. These allegations against Karuna Amman were there when he was a Minister and a politician as well. Now this goes beyond an allegation because he had admitted it?

Yes. So far all the government that were in power had failed. Karuna was part of the government and was an MP since 2008. So whatever the government that was in power has failed to take action against him according to law. The entire country knows these events that took place. Aranthalawa massacre and the Batticaloa police station killing are clear incidents, they are recorded. We know the number of monks who were killed in the bus in Aranthalawa. We know that about 600 policemen were killed in Batticaloa Police Station. All there records are available. So therefore with all that available the government can easily take action against Karuna for the criminal action committed by him. Successive governments may not have done that but that does not mean that Karuna is immune from prosecution. That is the failure of the successive governments, whatever the party they are belonged to, whether it was a incumbent government or the government that was in power before or Yahapalanaya government. That doesn’t matter this is not a matter of party politics. This is a matter of principle. We must ensure that the rule of law is maintained. That is how we can create a society based on rule of law in this country. Let us see how the government going to respond to this. And thereafter let’s see and give the government a chance.

Apparently he had made a statement to the Police or the CID. Let’s see what the statement is and see what further action this government would take on this matter. So there is no prescription as the law is concerned. The law of this country does not provide prescription of serious crimes of this nature.