Kamlesh Sharma, promises made to you, personally by the GoSL have been shamelessly, unrepentantly broken 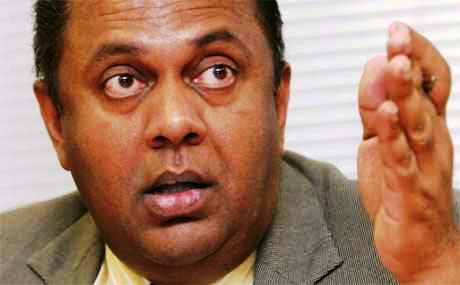 ”We recall that you promised Sri Lanka would put plans in place to change its legislative procedures to remove senior judges within weeks of a key meeting of a Commonwealth Ministers Grouping (CMAG) in April last year. We were further encouraged by your announcement that the Commonwealth Secretariat will assist Sri Lanka in setting up a National Inquiry on Torture on the eve of CHOGM. Repeatedly we have been told that the Commonwealth Secretariat had in fact initiated a process that would bring the issue of national reconciliation under Commonwealth scrutiny and compliance.”
Mangala Samaraweera writes to Kamalesh Sharma
His Excellency
Secretary General of the Commonwealth
Marlborough House,
Pall Mall,
London SW1Y 5HX,
United Kingdom
Your Excellency,
It is as a matter of great urgency that we are compelled to bring to your attention the continuous violation of Commonwealth values by the current Chair of your esteemed organisation and the failure of the Commonwealth to take meaningful steps to rectify this dire situation.
The most recent incident of State-orchestrated violence occurred in the home district of the Commonwealth’s present Chairman in office Sri Lankan President Mahinda Rajapaksa, when five parliamentarians of the main opposition, United National Party (UNP) were brutally assaulted by goons affiliated with the regime.
These elected representatives were on a fact finding visit to the controversial Mattala Rajapaksa International Airport (MRIA) and the Magampura Mahinda Rajapaksa Port, both pet projects of the ruling regime, both costing at least US $ 1.5 billion, both shrouded in allegations of corruption and wastage and by all indications sprawling white elephants that have gobbled colossal sums of Sri Lankan tax payer money.
According to independent media reports, the five MPs were first harassed and intimidated when they were coming out of the MRIA. Live television pictures showed the Mayor of President Rajapaksa’s hometown carrying a pistol while a large crowd manhandled the MPs. The Mayor has claimed he was acting on the direction of the President’s powerful son and Hambantota District Parliamentarian Namal Rajapaksa. As has become the norm, Police personnel watched while the regime backed goons assaulted the MPs and attacked the vehicle they were travelling in. Complaints have been lodged with the police officially, yet the opposition does not dare hope for justice from a judiciary that has been beaten into submission after the Government illegally sacked the country’s most senior judge and appointed an administration puppet in her place.

President Mahinda Rajapaksa not only failed to condemn this attack on elected representatives of the country’s national legislature, he defended the actions of the mob, claiming ‘the people’ of the area had been ‘angered’ by the Opposition’s denouncing of development projects in the region. President Rajapaksa’s state controlled press, defended the attack on the Parliamentarians, claiming that Sri Lankan protestors pelting rotten eggs at Opposition legislators and vandalising their vehicle in the South were merely exercising the same right of democratic dissent as Britons who threw pies at UK MPs to signal their displeasure over policy.

The Opposition fact-finding mission provided the Government with a golden opportunity to showcase its commitment to the much touted Commonwealth values. The MPs committed no crime. They were democratically elected people’s representatives seeking to uphold the rule of law, good governance, transparency and the people’s right to information. As an organisation that holds democratic principles and tradition close to its heart, the Commonwealth must believe in the importance of democratic opposition and its role in maintaining checks and balances within a democracy. In fact, Sri Lanka is not only Chair in Office of the Commonwealth, but also recently held the Chair of the Commonwealth Parliamentary Association, an auxiliary arm that is concerned specifically with strengthening parliamentary democracy.
Tragically it now appears that there is no greater illustration of the disdain of the Chair of the Commonwealth for all these values.
Your Chairman has blatantly disregarded all assurances provided to you personally and to the greater Commonwealth to change his Government’s brutish ways after assuming office last November.
The truth is Mr Secretary General, Sri Lanka’s democracy, once vibrant and proud is under siege.
Your Excellency, for Sri Lankans opposed to the autocratic rule of President Rajapaksa and his Government, these are daily challenges. This Government that hosted Commonwealth Heads of Government in a reiteration of organisational values has shot and killed civilians engaged in lawful, democratic protest against state policy and injustice in cold blood over the past three years.  Democratic challenges to the excesses of President Rajapaksa’s regime are met with increasingly brutal force. On several tragic occasions they have even been met with live ammunition fired upon unsuspecting, unarmed men, women and children. The most recent of these tragedies, you will recall, took place mere months before the Commonwealth summit unfolded in Colombo, when the military opened fire on a civilian protest demanding clean drinking water, killing three young men, two of them just schoolboys.
This now is the example that is set by the Chair of the Commonwealth.
Your Excellency, you may recall that the first female Chief Justice in our 200 year old judiciary was impeached in 2013 through a process that was deemed illegal at that time. It is a process deemed flawed and illegal by independent legal experts commissioned by your own office immediately after the impeachment took place.
As glaringly evident during the illegal impeachment process, the present Chairman in office of the Commonwealth, President Mahinda Rajapaksa and his Government have gone to great lengths to systematically undermine every democratic institution in Sri Lanka.
President Rajapaksa repealed the 17th Amendment to the Constitution that ensured the functioning of an independent judiciary, police and a public service. The draconian 18th Amendment that replaced it, took away the term limits of the Presidency, paving the way for an incumbent to rule for life. Journalists have been killed, exiled, bought or intimidated in to silence and the people have been denied their right to information. Over the past 18 months, under the watch of President Rajapaksa’s administration, ethnic and religious minorities have been  continuously persecuted through hate speech and violence by regime backed extremist elements. There has hardly been any measure to address the serious violations of human rights during the last phase of the conflict.
In fact the methods deployed in the North during the conflict have now been brought to the South, as witnessed in Weliweriya where the army was ordered to shoot and massacre innocent civilians who just demanded safe drinking water.
As Chair in Office, the Sri Lankan Government is expected to affirm, adhere to and implement the Commonwealth Charter ratified by all 54 member states in Perth in 2011. Sri Lanka has amply demonstrated its failure to live up to this Charter, repeatedly and consistently. We urge Your Excellency, to summon an emergency meeting of the Commonwealth Ministerial Action Group to discuss this grievous state of affairs. If this is impossible, as Sri Lanka’s main opposition we urge that the matter be given due consideration at the next CMAG meeting, in order to preserve the dignity and the credibility of the Commonwealth.
We recall your enthusiastic support of the Sri Lankan government in its bid to host the Commonwealth Heads of Government Meeting (CHOGM) last year.  Despite the serious breaches of democratic practices and Commonwealth values as witnessed in the two week long, highly flawed impeachment process of the Chief Justice and the numerous violations of human rights, impunity over cases of violence against religious and ethnic minorities, journalists and dissidents, we in the opposition were encouraged by your assurances that you have managed to garner assurances from the ruling regime that it would uphold Commonwealth principles and values, specifically regarding the judiciary and the rule of law.
We recall that you promised Sri Lanka would put plans in place to change its legislative procedures to remove senior judges within weeks of a key meeting of a Commonwealth Ministers Grouping (CMAG) in April last year. We were further encouraged by your announcement that the Commonwealth Secretariat will assist Sri Lanka in setting up a National Inquiry on Torture on the eve of CHOGM. Repeatedly we have been told that the Commonwealth Secretariat had in fact initiated a process that would bring the issue of national reconciliation under Commonwealth scrutiny and compliance.
In June last year, you appealed to the world to wait before they judge Sri Lanka. Your confidence in the bona fides of President Rajapaksa’s Government has been unshakable.
Yet all of those promises made to you, personally by the Sri Lankan Government have been shamelessly, unrepentantly broken.

The Torture Commission has been delayed indefinitely based on pretentious excuses. The Government has not only failed to put in place a lawful system to discipline top judges in the country, it has wilfully defeated attempts by the opposition, our own party, to table draft legislation that would streamline those processes in accordance with the Commonwealth’s own Latimer House Principles on the Independence of the Judiciary.

Rather than embracing Commonwealth values, its current Chair has launched a determined campaign to flaunt them. The judiciary and the law enforcement arms of the State are selectively used against opponents while it blindly looks the other way as was witnessed in the recent incident in Hambantota.
Your Excellency, we have no alternative but to believe that you and the Commonwealth Secretariat are as much victims of President Rajapaksa’s machinations as we are.
Today, under President Rajapaksa’s stewardship, Sri Lanka’s democracy hangs by the barest of threads. It is both tragic and farcical that these events unfold while the country holds the Chair of your esteemed organisation. Will he manage in this two year tenure to do to the Commonwealth what he has done to Sri Lanka’s proud democratic traditions? Already Sri Lanka’s leadership is costing the Commonwealth dearly in monetary terms. But our fear, Your Excellency, is that at the conclusion of Sri Lanka’s term in 2015, the Commonwealth would have lost much more in terms of credibility, relevance and moral authority because of the Sri Lankan Government’s actions.

Not only as a member of the  Sri Lanka’s main opposition but also as a former Foreign Minister of Sri Lanka, I  implore you to act. This erosion of democracy and fundamental freedoms is no longer only Sri Lanka’s crisis. The fate and future credibility of the Commonwealth  is inextricably bound to the actions of its Chair in office and his commitment to protect and uphold the Commonwealth Charter during his tenure.

It is your crisis too.