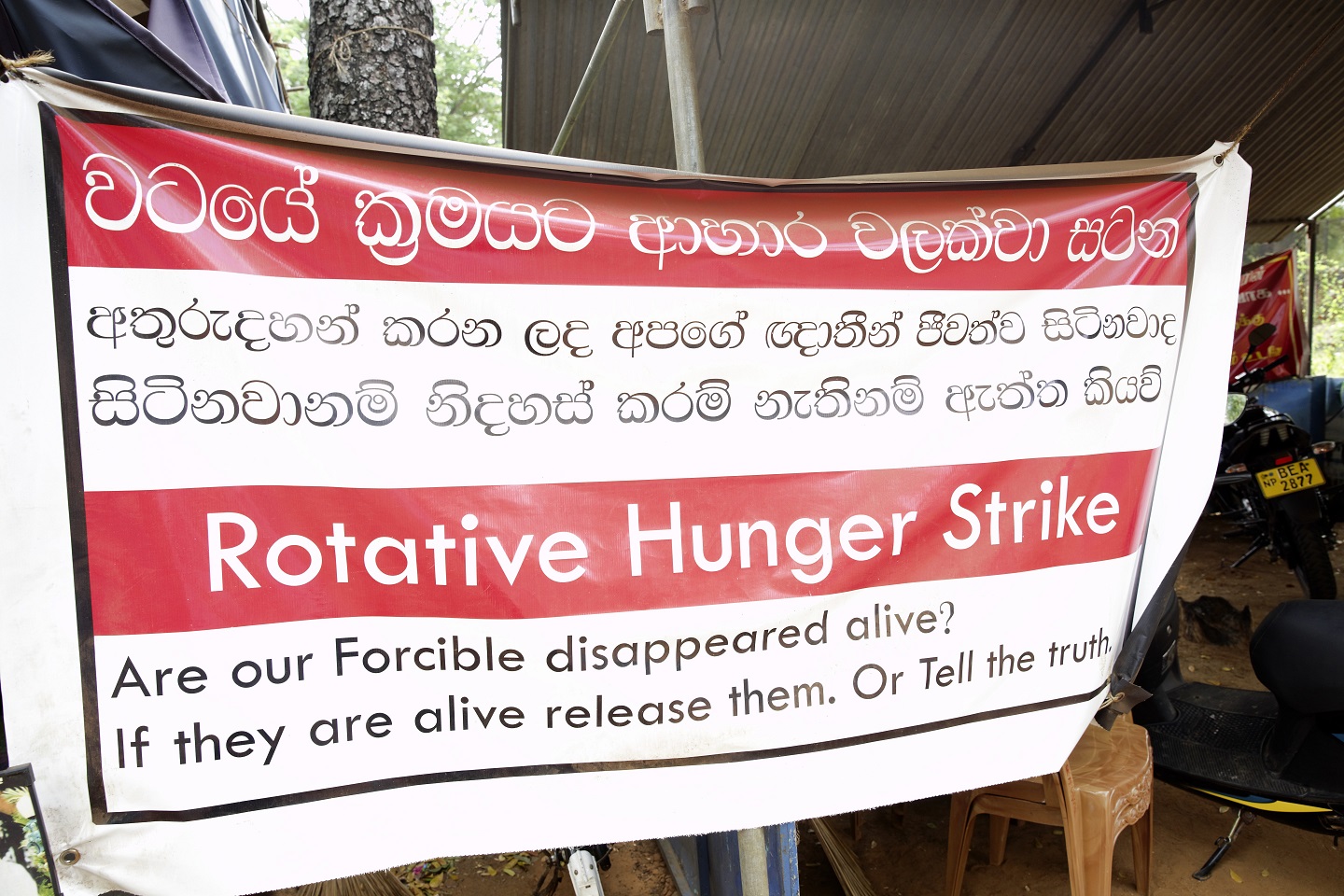 Joint Statement in solidarity with Families of the Disappeared for International Day of Victims of Enforced Disappearance
August 30, 2017.

Today marks the International Day of the Victims of Enforced Disappearances around the world. Today also marks the 192nd day of the ongoing roadside protest of families of the disappeared in Kilinochchi seeking truth and justice about the fate of their disappeared loved ones. Across the North-East of Sri Lanka in Vavuniya, Mullaitivu, Kilinochchi, Mannar, Jaffna and Trincomalee, hundreds of families of the disappeared have been protesting since February in horrid conditions on the road, attempting to draw attention to their plight. To date, the Sri Lankan Government has failed to answer any of their demands to uncover the fates of their disappeared loved ones. The undersigned organizations take this opportunity to stand in solidarity with families of the disappeared protesting across the North-East who have been ignored by the Sri Lankan Government for far too long, and must finally receive the truth and justice they so desperately seek.

While much is being made of the proposed Office of Missing Persons Act (OMP Act) passed by the Sri Lankan Government over a year ago, families of the disappeared from the North-East have repeatedly made clear that they have justifiably little faith in the OMP, and demand that the Government first address demands they set out in a petition to President Maithripala Sirisena on June 12, 2017, when he finally met them 100 days after their protest began. During that meeting in a step welcomed by the families, the President agreed to fulfill the demands of their petition which included releasing the list of surrendees and detainees from the last phase of the war, releasing a list of secret detention centres maintained throughout and after the war, and releasing the reports of all prior commissions/inquiries for disappeared persons. Unfortunately, despite more than 100 days since the President made those pledges, he has neither fulfilled those pledges nor answered any of the families’ numerous follow-up letters.

Even on the proposed OMP, the Sri Lankan Government has failed to meaningfully consult families, and over a year after its passage families and civil society in the North-East continue to find the Act’s explicit and intentional sidelining of justice and accountability as deeply flawed and contrary to the promises made by the Government to the Tamil people domestically and at international forums.

As a country that has the second-highest number of cases reported to the Working Group on Enforced and Involuntary Disappearances, Sri Lanka must address and put an end to its horrific legacy of enforced disappearances if it is ever going to achieve sustainable peace. And in order to do this, it is important for all actors, including political parties, civil society activists and organisations, to keep families of the disappeared at the front and centre of this issue, and give due respect and support to their voices and perspectives on how to address this issue.

We call on President Maithripala Sirisena to definitively state his position on the pledges he made to families on June 12, 2017. We also call on all actors including civil society across the country and diplomatic missions to support the families of disappeared and their pledges. There can be no further delay in bringing a solution for these families who have suffered far too much for far too long.

Centre for Promotion and Protection of Human Rights (CPPHR)