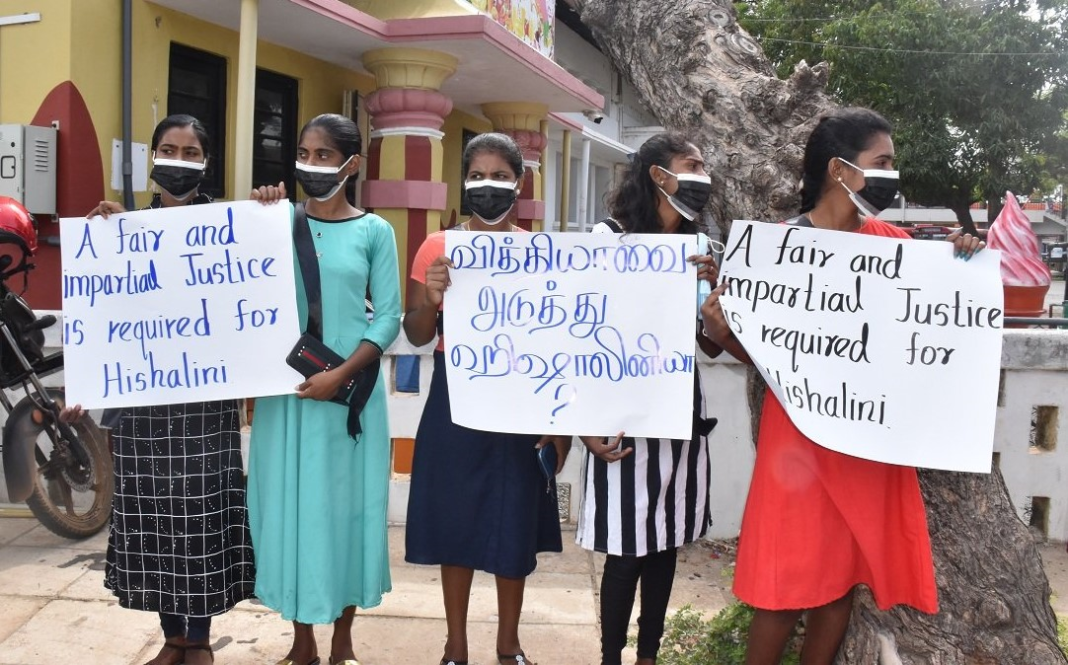 Image: A protest held in Mannar demanding justice for Ishalini and condemning  sexual violence against women and children.

On 2021.07.03 Friday, Ms. Jude Kumar Ishalini of Diyagama, Hatton—an underaged girl employed as a domestic aide at the residence of former Minister and present Member of Parliament Mr. Rishad Bathiudeen was admitted to the Colombo National Hospital with burn injuries. She succumbed to her injuries on the 15th while receiving treatment in Ward 73 of the Intensive Care Unit 2.

Thereafter, according to her Case No. B/52944/2/21, the Colombo Additional Magistrate Rajindra Suriya visited the Colombo National Hospital to view the body of the deceased girl and ordered a post-mortem. It has been reported in the media that she has been sexually abused for a long time.

Ishalini was born in Diyagama, Hatton on December 11, 2004. She was only 15 years and 11 months when she arrived as a domestic aide at the residence of Member of Parliament Mr. Rishad Bathiudeen. At the time of her death, Ishalini was only 16 years and 08 months of age. During her employment, she was only permitted to communicate with her family a few times over the phone but was denied visits to her family. She died without seeing her family members for nearly a year.

Education is compulsory for every child in Sri Lanka until the age of 16. There are officers attached to each Divisional Secretariats such as child probation officer, child protection officer and women development officer etc. and their work is to ensure that the children get educated and do not drop out from schools before 16. These officers are mandated to work within the community to protect children like Ishalini and help them with their education. If there are dropouts, they must work with the families and community to ensure that they go back to school. Hence, this case also sheds light on another dark side of the systemic failure of protecting and promoting child rights in this country. It is not new that up-country children are being used as forced labour in this country for decades. Rarely this cruelty has been brought to light. Further, women’s groups have observed an increasing trend of not only underaged girls being sold as domestic labour but also being sexually abused and treated inhumanly during this pandemic.

According to the Employment of Women, Young Persons, And Children Act (No. 47 of 1956) of Sri Lanka, children aged between 16 – 18 can be employed for a common good. But before so employing children between the age of 16 -18, the Labour Commissioner should be informed of the reason. Further, the law says that no one can employ a child in such a manner as to prevent the child from attending school.

Therefore, Ishalini’s employment as a domestic aide is improper as her education had been disrupted.  Furthermore, the post-mortem report states that the victim has been sexually abused for some time. In terms of the Penal Code sexual exploitation is an offence and sexual harassment at the workplace is a punishable crime too.

This incident is linked with various grave offences such as employing an underage girl child, being forced to discontinue education and sexual exploitation. Hence extensive and impartial investigations should be carried out in connection with the death and other related rights violations and perpetrators brought to book.  Fair trial and justice to Ishalini, hopefully, will put an end to the abuses and exploitations of many Ishalinies.

Presently, the Corona pandemic situation has caused various economic hardships to people including loss of livelihoods to many. As a result, there is visible and phenomenal increase in domestic violence, sexual abuse and more generally violence against women and children. In the Batticaloa district alone in the last six months, 14 child sexual abuse cases and 63 violence against children have been recorded.

In July, to date, media has reported a total of 05 cases of violence against children, including the instant case of Ishalini. They are:

These are the reported cases and possibly a tip of an iceberg of an endemic that is overshadowed by Covid -19 in this country.  The Child Protection Authority and the structure of the Women and Children’s Welfare Police Division must work impartially and fearlessly to ensure justice in terms of complaints received about child abuse and exploitation. This must be stressed as none of the above structures was able to carry out their duties in an effective and efficient manner, despite the escalating violence against children during the period when travel restrictions are in force.

As women’s rights activists, we made several attempts, but the said structures failed to respond effectively. Therefore, it is apparent that the ineffectiveness of these structures has also contributed significantly to the continuation of grave violence against children. We hope, at least after the publicity Ishalini’s tragic death has garnered, these structures would wake up and discharge their duties effectively to ensure justice for the victims. In addition, the relevant Minister G.L. Peiris and the Minister of Justice Ali Sabry who is continuously discussing reforms to the legal system should consider introducing changes to the laws concerning child rights to be more effective.

An effective mechanism should be developed within the legal framework to inquire about cases involving children and to establish procedures to ensure the sentencing of offenders expeditiously. Officers who neglect their duties must also be brought to book. A strong victim and witness protection mechanism should be installed in every district. But most importantly implementation of an expedited process must ensure justice without delay whilst guarding the dignity of the victim throughout. This would be the only way forward to guarantee a reduction in incidents of child abuse and violence against children in Sri Lanka.