Jaffna: ‘No democracy when people live under military rule’ 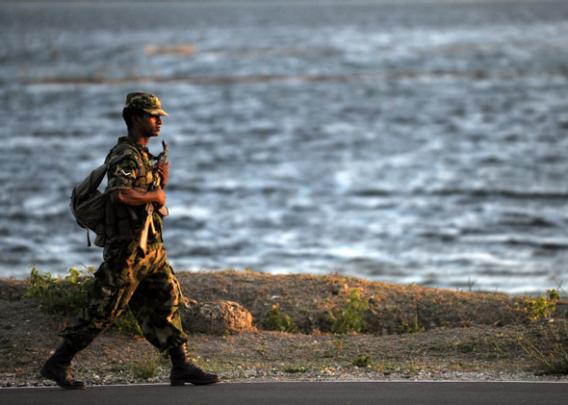 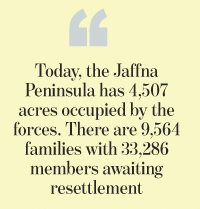 st Saturday, I went to my favourite beach, Casuarina Beach, in Karainagar. During vacations,we used to cycle the 13 miles from town regularly, to go there. The beach was just for us. This time it was crowded with many people. It was under the care of the Navy. There were several mangy stray dogs that seemed to be looked after by the Navy. The Navy spoke to us in Sinhala. Casuarina Beach has been commercialized with entrance fees for vehicles, and for every passenger. Thank God, there was no fee for my two dogs and cat.

Boat rides were on offer by ‘Kasurina Boat Service’ spilling oil into the water and spewing carbon monoxide. We were told we could not bathe the dogs because it was unhealthy for other bathers. But their mangy dogs were taking dips in the sea and dirtying the beach, the same beach where our children played, building sandcastles and burying our dogs. It was all organised by the Piratheysiya Sabai. I spoke to the Vice Chairman and asked him why use the Navy that should be confined to the barracks in a democracy, especially, when there are so many unemployed people in the locality. His reply was revealing: “Tamil people will not obey Tamils but will obey Sinhalese.”

Numbers Game – troops in the North

The Karainagar Piratheysiya Sabai’s position on the preference for Sinhalese troops in the North is rather unique. As the UNHRC reminds Sri Lanka of her obligations under Resolution 30/1, the government is in a dither. The Office of Missing Persons was established only recently but the delay that accompanied its establishment is telling on the government’s commitment to recognise Tamils as people with same rights as the rest of the citizenry.

The other shortcoming concerns demilitarising Tamil areas, where there has been poor progress. As was under Foreign Minister Tilak Marapona, the same damning information is being presented, and it takes the form of spinning. The intention is to say “We made significant progress. Give us time again to complete the good work we are doing.” Sheer bluff!

The Jaffna District today has 93 Naval bases occupying 2,946 acres (exceeding 12 sq. km), 54 Army bases and 1 Airforce base occupying 1,000 acres. These together with the 30 police stations rule us with an iron fist. However, their role is not clear except bullying people at the Casuarina Beach and stopping motorists to make money. Our fishermen have to pass the naval bases into the deeper seas for fishing.

The police announced recently that they have brought the sword-wielding Ava Group under control by arresting 50 of them. Yet, on August 22, in the Suthumalai, Inuvil and Thaavady areas 12 sword-wielding men had arrived on five motorbikes and attacked householders in three houses. On the 20th, a doctor’s house had been attacked. As reported on August 22, in Mannar, six persons in a boat from India had sunk, but all were rescued. Unconfirmed information is that the boat was rammed by the Navy but the fishermen say their boat and the Navy boat collided. Meanwhile, the drugs trade is hitting record heights despite the heavy presence of troops. The police with their 178 stations manned by 50,000 armed policemen are unable to say how so much Ganja could be bought in Jaffna. If that is protection, no thanks. Despite this force, the Government is unable to establish even a semblance of law and order except to prevent us from enjoying our beaches.

As the international community asks the Government about demilitarisation which was promised under Resolution 30/1, the numbers from Jaffna seem commendable, but that was under compulsion. Jaffna is unique in that most lands occupied by the Forces are private lands with deeds, estimated to constitute 90% of Jaffna lands. A case initiated by Mavai Senathirajah, the ITAK Secretary General in the High Court led to the judgement that they ought to be released to their owners. The Government had no choice, in this regard.

The story is different in the Kilinochchi, Mannar, Vavuniya and Mullaitivu districts where private lands are less than 25%. The rest come as reserved lands for forest, wildlife, irrigation, etc. These are occupied by the Forces although they are not intended for them and the reservations are intended for civilians – even the jungles of Wilpattu which are for our edification watching wildlife in their natural habitat.

In Mullaitivu only some 22% of the lands are private. Eight ponds and two crematoria are in Army camps. In Mannar, 12,800 acres of coastal lands are claimed by the Navy. The World Bank asked for a mere 3,000 acres for livelihood projects for the people for which Rs. 3 billion is ready to be used. However, the project cannot start because even the 3,000 acres will not be released. It shows the two faces of the government. One thinks up these generous projects to show the world that it cares for the Tamils, and the other blocks them. This project cannot start because troops will not budge.

When the cry for resettlement is so loud and heart-rending, the Government has created a separate District Secretary’s division of 108 sq. km in Mullaitivu reserved for Sinhalese settlers. This is the dreaded Manal Aaru Division which was depopulated of the Tamils through massacres by the Army in 1984, to settle Sinhalese in what is now Weli Oya. In better days, in 1965, it is good to recall, it was PM Dudley Senanayake who allocated these lands to the Tamils of the area. The recipients, in times when we had no bulldozers, cleared the land manually, for cultivation for two-season paddy.

As these Tamils cultivated these lands, the UNP lost the 1970 elections and the new left government created what it called the Land Army of unemployed youth for whom the lands were repossessed. The consent of the Tamils who worked hard on the land was never sought.

However, the Tamils believed they would get their lands back with the next change of government. Notwithstanding, when the UNP returned in 1977, it started an open prison in Thimpulaakal in the Kalkudah Electorate. Devanayagam, MP, as the only person from the UNP to win a seat in that area, prevailed on J.R.Jayawardene to shift the prison since the locals feared it. The Sinhalese prisoners from there were the first colonists to be settled in ManalAaru, now WeliOya.

Many opposed the move then. Sriskantharaja, President of the Jaffna University Students’ Union, launched an attack on the guards of the Open Prison.That attack was used to justify attacks on the Tamils of the area.Following this in the years 1983 and 1984, the surrounding villages were depopulated of Tamils. Established farms serving as homes for people displaced from tea estates, namely Dollar Farm, Kent Farm, and Railway Farm, each with 3,000 acres of farmland were taken over.These have been subdivided into 25 acre plots and given to Sinhalese, including Minister Nimal Sripala de Silva’s sister. Everyone profits from the Tamils’ misery.

That take-over for Sinhalese settlers continues today at Kokkulaai, Pokkuthoduvai, Nayaaru, Karunaattukerni, Palampaasi, and Thenmaravadi. Outside this region 72% of the land even today is jungle. As such they belong to departments for forest reserves, animal reserves, etc. Only the remaining 28% may be used for humans. Even this little land has been grabbed by the troops.

Hence, today, the Army controls much agricultural land. Another 8 ponds are under military control. Based on information provided by the LLRC, in Mullaitivu, there are 110 acres of private lands, and 7,937 acres of government land under the military. Even that information has been questioned. In the Oddisuttaan Piradeysiya Secretariat area 8,400 acres, from Karupattmurippu to Iranimadu 3,500 acres, and near Muruhandy (West of A9) 1,750 acres are with the Army.

Lying to the World

As the next sessions at UNHRC nears, the Government is preparing to spin these numbers. The Minister of Foreign Affairs is reportedly touring the North, personally asking for acreage under occupation. The trick is to say that so many acres out of so many acres of occupied private land have been released, when most of the occupied land is in the reserves for departments. The land continues to be occupied.

The enthusiasm in spinning seems to border on lying. We know for a fact that according to Marapona’s figures 991 acres in Mullaitivu are occupied. The same GA responsible for the data, responding to a request under RTI has stated 1,331 acres are under occupation. What happened to the difference of 300 acres? Figures given by Sriskantharajah, MP for Mullaitivu in 2017 suggest that the figure for occupied lands is above 35,000 acres. The same was confirmed by Raviharan of the NPC.

From sources friendly then to the LTTE, we also know that 3,500 acres in Iranaimadu, 1,200 acres in Viswamadu and 2,200 acres in Kepapilavu constituted LTTE farms (pannai as they called them). I know from people who travelled West of A9 into the jungles that they are still occupied by the army and the air force. Why are these not listed in the GA’s figures?

Likewise, in Mannar even as the Government claims that its forces occupy 640 acres, the GA responding to RTI requests says, 2,346 acres are occupied by troops. Even this is untrue, because, like in Mullaitivu,occupied lands account for more than 8,000 acres. Similar discrepancies exist in Kilinochchi between Government pronouncements and RTI revelations.

The truth and democracy

There is no terrorism in the North except for the bullying armed forces and bribe-seeking police. In a democracy, we expect the Government to be truthful and accountable. These prevarications diminish us as a democracy and cause severe problems at the Election Commission in registering displaced persons in their real homes, even as refugees now well-settled in new places are transported to vote in their former homes. We are no democracy when people live under the military.