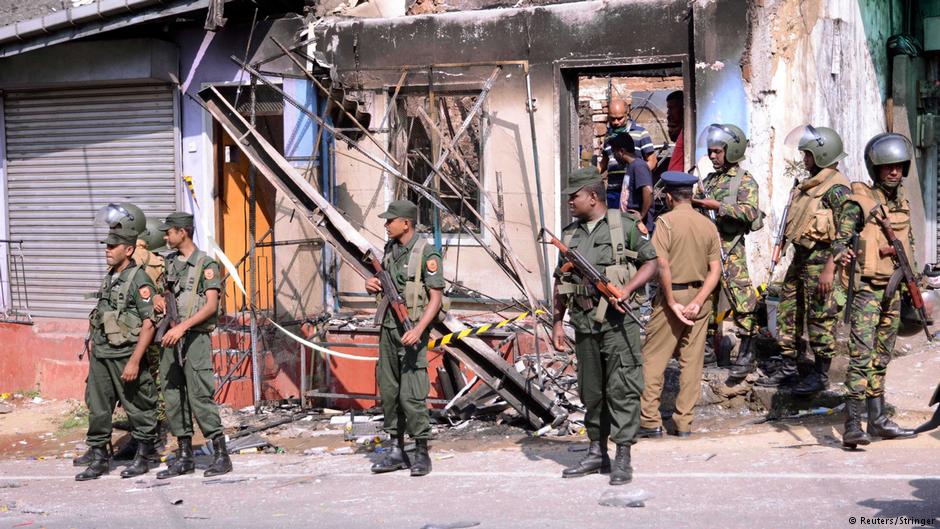 Violent clashes between Buddhists and Muslims have forced Sri Lanka to impose a state of emergency. Despite the move, the government appears uncertain about how to respond to the violence, says analyst Alan Keenan.

The Sri Lankan government on Tuesday declared a state of emergency for 10 days to rein in the spread of communal violence after Buddhists and Muslims clashed in the Indian Ocean nation’s central district of Kandy.

On Wednesday, the government also shut down social messaging networks, including Facebook, to control the violence.

The unrest casts a spotlight on the underlying communal tensions in the South Asian country. In a DW interview, Alan Keenan, Sri Lanka analyst at the International Crisis Group (ICG), talks about the current volatile situation as well as the relations between Buddhists and Muslims in the country.

DW: What are the reasons behind this latest communal violence in the country?

Alan Keenan: There are many factors behind the recent upsurge of violence against Sri Lankan Muslims. The events of the last ten days have not been local-level “clashes” between Buddhists and Muslims, but organized and targeted attacks from national-level militant groups who are well-known and have made their intentions clear through traditional and social media.

The immediate cycle of violence began with the death on March 3 of a Sinhala Buddhist man in the central hill town of Teldeniya. He was attacked ten days earlier by four local Muslim men, who were promptly arrested and detained. The death sparked anger and some violence the next day by local Buddhists, 24 of whom were arrested and held by the police.

Keenan: ‘The ongoing violence marks the resurgence of militant Buddhist groups that first emerged in 2012-14’

Demanding the release of these men, leaders of radical Buddhist groups converged on the town with hundreds of their supporters from other districts, who later began attacking mosques and Muslim businesses and homes. Even after yesterday’s declaration of a state of emergency, violence continues against Muslims in the central hills area around the town of Kandy.

The violence this week came just days after a mosque and Muslim businesses were attacked in the southeastern town of Ampara. There are indications the attack was pre-planned and carried out mostly by Buddhist militants brought in from outside Ampara town, supported through rumors spread on social media. Government officials have acknowledged that the damage was aggravated by the slow response of the local police.

The ongoing violence marks the resurgence of militant Buddhist groups that first emerged in 2012-14 during and with the support of former President Mahinda Rajapaksa’s government. Having ceased during the first two years of the current coalition government, attacks on Muslims began again over a six-week period in April and May 2017 and for two days in November 2017, with militants apparently emboldened by the government’s failure to prosecute those responsible for violence and hate speech during the Rajapaksa regime.

Sri Lanka has grabbed international headlines in the past due to tensions between the Sinhalese and Tamils. But how do you describe the relations between Buddhists and Muslims in Sri Lanka?

Muslims, who make up almost 10 percent of Sri Lanka’s population, live across the country among both Sinhalese (who make up 75 percent of the population and are overwhelmingly Buddhist) and Tamils (about 15 percent and mostly Hindu). Relations are mostly harmonious. At the same time, there are long-standing and deeply rooted fears among many Sinhalese that the Sinhala and Buddhist character of the nation is under threat and must be protected, even to the extent of using violence.

While the threat has previously been seen as coming from colonial rulers, and then Tamils, Muslims are now the primary worry for many Sinhalese.

Narratives of insecurity, fed by global Islamophobic tropes, present Muslims as violent extremists, as increasing their population so fast as to pose a threat to Sinhala Buddhist majority status, as misusing their economic power to weaken Sinhalese and as using underhand means to reduce Sinhalese Buddhist numbers through secretly planting contraceptives in food eaten and clothes worn by Sinhalese.

These fears and myths are widely promoted — along with calls for violence — through social media.

The fears are also regularly encouraged by some Sinhala business interests to weaken their Muslim competitors. These rivalries play out at the local level with regular appeals to Sinhala Buddhist consumers to boycott Muslim shops and with Muslim-owned businesses regularly targeted in anti-Muslim rioting. They also have a national character, with certain Sinhala business leaders widely believed to be key funders of Bodu Bala Sena and other militant groups.

‘While the state of emergency appears to have helped reduce the violence, attacks have continued’

Criticisms of Muslims as gaining greater economic power through unfair means have particular resonance with Sinhalese facing economic difficulties, as the government struggles to control the cost of living and provide sustainable livelihoods, especially in rural areas and small towns.

How vulnerable are Sri Lankan Muslims to being drawn to extremism and radicalism?

Sri Lankan Muslims have been admirably restrained, disciplined and non-violent in their response to what is now five years of severe, sustained and often violent pressure. One can only hope that this continues to be the case, though continued violent provocations — and the failure of the police to protect Muslims — will test their patience. There has been no evidence of any violent extremism among Sri Lankan Muslims, other than a few clashes in years past between adherents of a more austere, reformist style of Islam and Muslims whose practices are considered to be Sufi-inflected.

Sri Lankan Muslims have grown more noticeably religious over the past 50 years, most visibly in the increasing numbers of women wearing hijab (headscarf), abaya (cloak) and in some cases nikab (veil), and men dressed in white religious robes and caps. The number of mosques has also noticeably increased. This has drawn greater prominence to Muslims as a visible “other” and led to some Buddhists to see them as an outside and threatening force, as distinct from earlier generations of Muslims with less noticeable religious attachments.

How has the Sri Lankan government tried to quell the tensions between Buddhists and Muslims and promote communal harmony?

The government has done very little to address either the underlying mistrust or misunderstandings between the two communities, or to rein in the small number of Buddhists who promote or use violence. Despite coming to power in January 2015 promising to end impunity for attacks on Muslims, there have been no proper investigations of past violence, and leaders of groups known to be involved in attacks on Muslims have not been prosecuted.

Despite recent statements from the president, prime minister and other officials that the law will be strictly enforced and those engaging in violence will be arrested, key organizers of the ongoing violence remain free. Some of these have posted on social media information to help target Muslims for attack. Police in a number of locations have been credibly accused of siding with the mobs.

While government leaders are not believed to be supporting the violence against Muslims, they appear to be afraid of taking action against the perpetrators, especially those Buddhist monks thought to be involved, for fear of alienating Sinhala Buddhist voters by appearing to favor Muslims. This fear has grown since the recent poor showing of government candidates in the February 10 local government elections, in which former President Rajapaksa led a successful campaign rooted in a strongly Sinhala Buddhist nationalist platform.

The increasingly deep divide between the president and the prime minister, who is battling to hold on to his job, appears to have further paralyzed the government.

What steps could or should the government take to curb further communal violence?

The government needs to adopt a three-pronged strategy, beginning with enforcing the law, including against hate speech, and arresting and prosecuting offenders. While the state of emergency appears to have helped reduce the violence, attacks have continued. Should the government act decisively and explain the necessity of their actions to the Buddhist religious leadership and the general public, it is likely they can win the necessary support.

Over the mid-to-long term, the government must also work actively to correct the lies and disinformation about Muslims that are spread by radical Buddhist groups, especially on social media, such as the allegation that Muslim restaurants regularly put contraceptives in their food in order to sterilize their Buddhist customers and reduce their population.

The impact of such rumors and “fake news” could be significantly reduced if the government used its media and information channels to combat them. Finally, over the long term, but beginning now, the government needs to more actively promote a pluralist vision of Sri Lanka, in which the country belongs to all communities equally while still protecting the country’s unique Sinhala and Buddhist culture.

How do you see the security and communal situation evolving in the country in the coming weeks? Will the Sri Lankan government be able to bring the situation under control?

The continued failure to make arrests of well-known Buddhist agitators and the instigators of recent attacks is not encouraging, and despite the state of emergency, the government still appears uncertain about how to respond to the violence. The chaos and infighting that has characterized the coalition government’s response to their defeat in the local government elections has continued and contributed to a sense of weakness that has been seized on by militant Buddhists groups. Strong, decisive and coherent action is needed if Sri Lanka is to prevent a new and potentially crippling round of communal conflict.

The interview was conducted by Srinivas Mazumdaru /DW.com