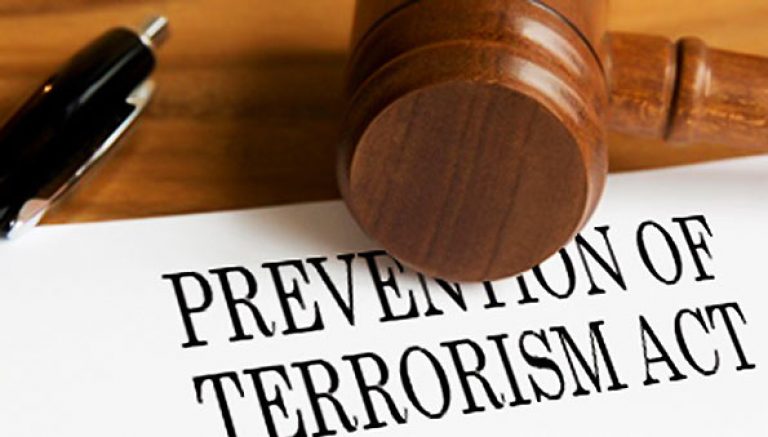 For several years the Prevention of Terrorism Act (PTA) has troubled Human Rights (HR) activists as one of the most draconian pieces of Legislation on the Statute Books of the country. The Legislation which was hurriedly passed by the Legislature, included many provisions that were clearly problematic from the perspective of the Fundamental Rights of individuals, guaranteed by the Constitution.

The experience of the LTTE-inspired insurrection, as well as that of the JVP-led revolt of the late 1980s, confirmed the apprehensions expressed during the passage of the PTA, with large scale abuses that infringed the rights and freedoms of individuals taking place during such troubled times.

With the Counter Terrorism Act (CTA), which will replace the PTA, likely to be taken up for debate in Parliament soon, it would be an opportune time to reflect on whether anti-terrorism Legislation is in fact required in Sri Lanka, at this point of time.

While the world is currently facing the phenomenon of terrorism in various forms and hues, the perennial debate about balancing national security interests and the freedoms of individual members of society, engages the attention of policymakers worldwide.

In Sri Lanka, with the end of the armed conflict in May 2009, the danger of terrorism has receded. Post-January 2015, with the opening up of democratic space for civilised discourse, the likelihood of violence in pursuit of political goals becomes an even more unlikely scenario.

Many initiatives of the Government and Civil Society, designed to build good relations between communities and to heal the wounds of the past, have given rise to optimism that the country is unlikely to repeat the mistakes of the past, by a resort to violence to solve its problems.

Although progress in this field is painfully slow, there is no denying that movement towards National Reconciliation is taking place despite obstacles.

If this be the case, what is the need for the country to replace the obnoxious PTA with a CTA, which is in some respects an improvement on the PTA. Many HR organisations, both here and abroad, including Human Rights Watch, have conceded that the latest draft of the CTA contains some provisions that provide safeguards to individual suspects.

However, concerns have been raised with regard to the conditional approval given by the Cabinet to this piece of Legislation. According to newspaper reports, Cabinet approved the draft CTA Bill with the proviso that further changes could be made at the Committee stage of proceedings in Parliament.

Based on the disastrous experience of the legislative process relating to the enacting of the Law relating to Local Government & Provincial Council Elections, where the nature and content of the original Bills was distorted through Committee stage amendments, these are not unfounded fears.

This is a fear that can extend to other Legislation in the future too. The remedy may be to create provisions in the Law for post-legislative review of Committee stage amendments within a stipulated period of time.

In the PTA-CTA debate, the existence of the Public Security Ordinance (PSO) under which a State of Emergency can be declared and Emergency Regulations (ER) promulgated to meet any eventuality, have been lost sight of. In the unlikely event of another ‘terrorist’ situation arising, the State can always resort to the declaration of an Emergency and take consequential action.

The advantage of such an approach is that, such executive action will be continuously subject to Parliamentary oversight, as the regulations under the PSO have to be presented to Parliament and debated every month. In the case of permanent Legislation like the PTA and CTA, implementation of the Laws is by officials who act below the radar of Parliamentary and public scrutiny, thus giving rise to greater opportunity for abuse.

Another advantage of acting under the PSO is that, once such an emergency ceases to exist the ER can be withdrawn.

The ER that have been used in the past are far from perfect and need to be modified, to ensure democratic safeguards. Some of the positive features of the CTA can be embodied in the ER where necessary. Parliamentary debates in the late 1950s contain valuable suggestions by Dr. Colvin R. de Silva, S. Nadesan Q.C. and others, with regard to improvements that can be made to the ER, and these too can be taken on board.

One the most important safeguards that have to be kept in mind, when enacting ‘terrorist’ related Legislation, is to ensure a robust system of justice that will minimise and prevent the abuse of the system by officials or other interested parties.

The recent case of Kamar Nizamdeen, a Sri Lankan student who was arrested in Sydney, on suspicion of what was described as ‘terror’ offences, highlights the need for fair and speedy justice. The Australian Police authorities conducted their investigations expeditiously and once the evidence that was forthcoming revealed that Nizamdeen was innocent, he was released.

In Sri Lanka, there are reports of several suspects detained without trial for many years, under the provisions of the PTA. If the authorities have not found evidence after all these years to indict these suspects, they are best released without further delay.

Subsequently, the Australian Police found that Nizamdeen had been framed and arrested another suspect who was suspected to have framed him. This brings to light another real danger to individual freedom, where it is very easy to frame an individual using the bogey of terrorism. The Law has to be designed to ensure that the damage caused by being subject to the making of such false allegations is minimised, by expeditious and fair investigations.

Another important aspect that those suspected of terrorism related offences face is the denial of access to family and lawyers. In the case of Nizamdeen, his family and friends did not really fear his involvement in any terrorist activity. Those who knew him personally, never doubted his innocence and were certain that his nature and character would not allow him to be involved in heinous crimes of such a nature.

What concerned them most was his safety and conditions of detention. The inability for friends and family to access him and be certain that he was safe was what mattered most.

This is the concern of the near and dear of those who are arrested on suspicion of terrorist activity. If the family have access and are aware of the safety of such suspects, they will be saved much heartburn and unease, if they are faced with such an unfortunate situation.

The Government should think twice before placing the CTA on our Statute books. Instead, it should pursue its efforts in the direction of National Reconciliation with renewed vigour, which will be more beneficial for the future of the country and its people. ([email protected])