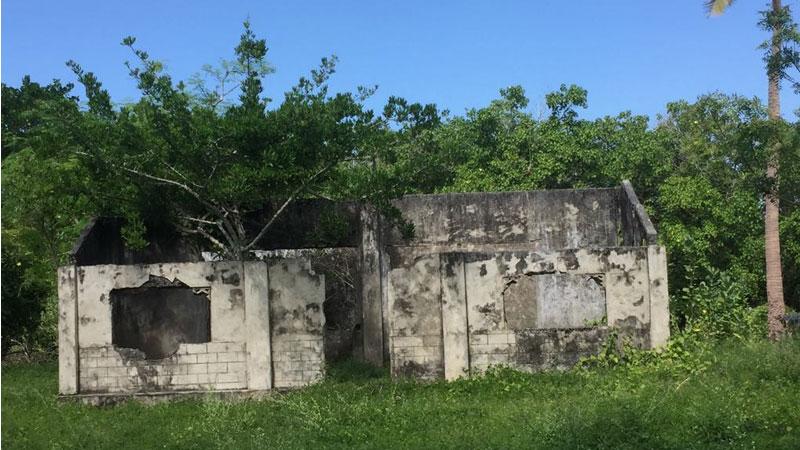 It was on April 23, 2017 that I joined the Iranaitivu residents in their journey to reclaim their traditional island, which had been denied to them by the Navy for more than 25 years. When I visited last week with some friends and colleagues, I again experienced their love for their land, resilience and determination to strive in their traditional home.

Fighting restrictions on accessing the island

There are no passenger boats between the mainland and the island, hence the fisheries cooperative had arranged a special boat for us. The boat ride was beautiful, but not easy. We had to brave the hot sun, shallow waters in which the engine stalled and rough seas in which we were drenched with sea water. But it was a journey well worth its while.

“I could not help but imagine the precarious journeys these Islanders would have undertaken during the years the war intensified in this region and the natural barrier it would have posed to leaving their valuable belongings when they were suddenly displaced.I had heard that both Sri Lankans and non-Sri Lankans have been stopped from going to the island by the Navy officers and not surprisingly, we were also stopped when we tried boarding the boat from the mainland.

The officers kept insisting on my disclosing my profession and reasons for going to the island, even as I tried to patiently explain constitutional rights of freedom of movement, and asking them based on what laws were they stopping us and demanding some form of special authorisation.

The Human Rights Commission intervened swiftly, and informed us that the North Central Commander for the Navy had clarified that there was no legal restrictions and anyone was free to go to Iranaitivu.

The officers who stopped us became apologetic, and tried to explain their concern was rough seas and dangerous animals on the island, but were helpless to answer when asked why a special authorisation based on profession and purpose was necessary to ward off these new concerns. Refreshingly, the next day, journalists were allowed to travel to Iranaitivu without obstructions, and I hope more people will visit and assert their right to movement.

My previous landings were on the larger island of Periatheevu, but this time, we landed on the smaller island of Sinnatheevu. We met several people who were repairing St. Sebastians Church, a small church on Sinnatheevu, the feast of which they are due to celebrate today, January 13. We were shown wells with drinking water. Some had been cleaned and was the source of water for people living there. Others have been damaged or unusable due to long years of abandonment. A major challenge that needs to be addressed is a system to take the water to the other island where there is less potable water.

The ruins of the brick houses they were forced to leave were visible, often next to the thatched huts they had erected to live since April last year.

There is no motorised transport on the island except for one tiny old roofless mini-lorry. So, from the smaller island, we walked through lush greenery, small lakes and waded through a beautiful strip of sea to the larger island.

The main church in the larger island had been repaired with some assistance from the Navy. But other community buildings suh as the school, cooperative, women’s society, the residences of the priest and nuns, the hospital, the Village Council and the elaborate systems for collecting and storing rain water, both overground and underground, are still in ruins.

An elder told us that they rarely used medicine, showing us some medicinal leaves from a plant he plucked as we were walking.

They residents seemed the happiest about advances they had made in livelihoods after reclaiming the land. We saw dried fish and sea cucumber, which the women said they can harvest just by walking out to the sea in the morning and sometimes evenings as well, leaving the rest of the day free for other activities. We saw tomatoes being grown in a home garden beside a thatched hut. Others we met were repairing by hand nets for lagoon crabs and sea crabs.

There is no electricity on the island. They have received some small solar panels for basic needs from a private well-wisher, which is being used at present.

Reflections and the future

There are still many communities struggling for land around the country, especially in the North and the East. Many are due to Army and Navy occupation, such as in Jaffna, Mullikulam and Pallimunai in the Mannar district, Kepapilavu in the Mullaitheevu district and the Kanagar village and Panama in the Ampara district. I hope Iranaitivu will inspire others struggling to reclaim their lands and fighting for justice.

Iranaitivu is also an inspiring story of a resourceful and beautiful island, unjustly denied to its historical residents by the Navy, but reclaimed by a determined, sustained campaign including a 359-day continuous protest, and finally, by a well-planned, and daring sea journey and landing to reclaim the island, defying the Navy.

Well established community institutions such as the women’s group and fisheries cooperative and the parish priest was instrumental in the community’s survival during decades of displacement and the struggle to reclaim their lands.

Support from other Catholic clergy, activists, media and international community was also important. Iranaitivu is also a story of a resilient community consolidating their claiming of the land by reinvigorating their traditional livelihoods and strengthening community institutions.

But the missing factor is the Government. At least now, the Government must step in, ensure reparations, and facilitate resettlement. Among those who are unable to live on the island are school-going children and some of their family members, which indicates the urgency to rebuild and restart the school on the island as soon as possible.

The hospital also needs to be rebuilt and the school and hospital needs to be adequately staffed. Rebuilding houses, cleaning the wells and installing a water distribution system is urgent. Community buildings too need to be rebuilt.

Government officials must be present on the island. New projects could be initiated, such as for electricity, particularly by exploring the option of solar-power.

Passenger transport boats between the island and the mainland, and at least some minimal transport facilities within the island for emergencies and essential needs need to be established.