Involvement of the United Nations in the Reconciliation process 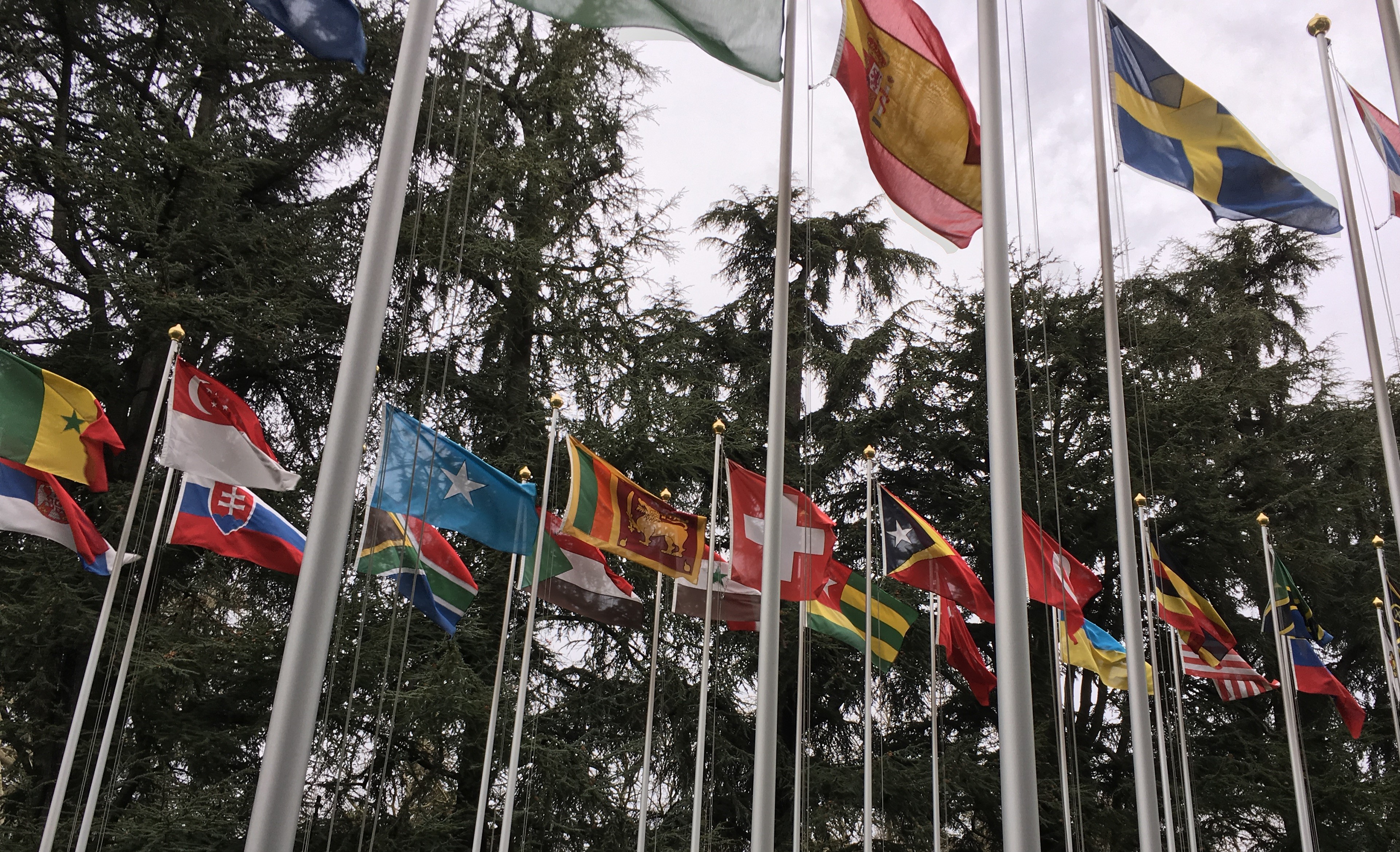 President Maithripala Sirisena, in the course of his speech to the nation on National Day, said that he is concerned about the interference of the members of the international community in the internal affairs of the country. There is no doubt that he had in his mind the resolutions against Sri Lanka adopted by the UNHRC based in Geneva requiring the Government of Sri Lanka (GOSL) to implement certain recommendations which were considered essential for achieving post war reconciliation by the sponsors of the resolutions. He had expressed strong opposition to the recommendation for establishing a hybrid tribunal to investigate allegations of serious violations of human rights and humanitarian law amounting to war crimes during the last stage of the war concluded in 2009.

Resolution 30/1 of the UNHRC was co-sponsored by Sri Lanka because the Government that came into power in 2015 genuinely believed that this resolution recommended some steps the Government should take for achieving genuine reconciliation and durable peace in the country.

By co-sponsoring the resolution Sri Lanka adopted a pragmatic approach to the issue of dealing with the international community led by leading democratic countries such as, the USA and the UK supported by India.

These countries were motivated by democratic ideals to play an effective role to ensure that the GOSL will take steps for the restoration of durable peace.

They have acted on the basis of information received by them, that serious violations of human rights had occurred in Sri Lanka during the Eelam war IV.

In 2012, when a resolution was before the UNHRC in Geneva, the Sri Lankan delegation adopted a confrontational approach arguing that the UN has no right to adopt resolutions against Sri Lanka compelling her to take any steps considered necessary by the sponsors of the resolutions, for addressing the grievances of the people living in the North and the East of Sri Lanka, affected by the war.

The role played by India in supporting the sponsors of the resolution against Sri Lanka in 2012 compelling her to implement the recommendations of the LLRC, among other things, is consistent with the democratic ideals by which the sponsors were guided. India, of course, had a special interest in the conflict within Sri Lanka, and was of the view that she had a special obligation to ensure that the grievances of the Tamil community were satisfactorily addressed by GOSL.

Therefore, the Indian government would have appreciated GOSL’s policy adopted in 2015 for cooperating with the United Nations and undertaking to take all steps to address the legitimate grievances of the Tamil community.

India supported the military defeat of the LTTE together with other leading members of the international community after realising that the LTTE was not prepared to deviate from its hard line position of establishing a separate state – the Tamil Eelam – after several years of peace talks facilitated by Norway.

After the end of the war, India assisted GOSL by providing financial and other material assistance to the people of the North and the East affected by the war, for resettlement, rehabilitation and repairing infrastructure.

The Sri Lankan people appreciated India’s assistance to provide the immediate needs of the people in the war affected area.

The Indian Government expected the Sri Lankan Government to bring law reforms including constitutional amendments necessary for the devolution of power.

The GOSL had on many occasions given an assurance to the Indian leaders that Sri Lanka was prepared to implement the 13th Amendment to the Constitution fully and even to grant additional power to the Provincial Councils making devolution of power meaningful.

However, the Indian government has now realized that the infighting among the political leaders of Sri Lanka in a struggle for capturing power at the forthcoming elections, would be an obstacle to reach consensus among the political parties for substantial amendments to the Constitution or taking steps to complete the implementation of the UNHRC resolution.

Lord Naseby, taking part in the debate in the House of Commons on February 5, appealed to the UK Government to withdraw Resolutions 30/1 and 34/1 of 2015 and 2016, pointing out that one of the leading states that co-sponsored the resolutions, the USA, has withdrawn its membership in the UNHRC based in Geneva, and also considering the progress Sri Lanka has made for achieving post-war reconciliation.

However, the other MPs who took part in the debate insisted that GOSL should implement fully the UNHRC resolutions. But, all the speakers appreciated the steps that GOSL has already taken in the direction of complying with the resolutions, such as, to improve the human rights situation in the country, return of land held by the military to the civilians, establishment of the Office on Missing Persons, the Ratification of the Convention on Enforced Disappearances and passing the Office for Reparations Bill.

Fear of a change of government obstructing the progress

It appears the United Nations has taken into consideration the present state of political instability in Sri Lanka and the possibility of a change of government that would reverse the progress already made after co sponsoring Resolution 30/1. During the ongoing session of the UNHRC in Geneva, Michelle Bachelet Jeria, the United Nations High Commissioner for Human Rights, in a report, warned, “ The political crisis at the end of 2018 further obstructed progress owing not only to the temporary paralysis of investigations but also because it generated fears that another Government might not embrace the reconciliation agenda.

There were also concerns among key stakeholders that a return to power of the pre-2015 administration could have negative implications for their security and the human rights situation”. The new resolution sponsored by Canada, Germany, Montenegro, North Macedonia and the United Kingdom requires the Sri Lankan Government to implement fully the measures identified by the UNHRC Resolution 30/1.

Some critics of the involvement of the United Nations in the post war reconciliation, particularly, regarding the violation of human rights and accountability issues, ignore the fact that these resolutions seek to address some reasonable grievances of the Sri Lankan Tamil community occupying the North and the East, who were the most affected by the war. It is the view of all right thinking people that the United Nations is playing a commendable role when they intervene to prevent the violation of human rights, including the right to life, of beleaguered sections of the population in countries affected by ethnic conflicts or civil wars. The experience of the Tamil community of Sri Lanka is that they cannot trust the Sinhala leaders to honour the promises made to address their grievances. This is the main reason for them to solicit the support of other countries, the Tamil Diaspora, especially India.

The GOSL is now facing a critical situation as the opposition political parties have accelerated their propaganda campaign against the Government in view of the forthcoming elections due to be held towards the end of this year.

They want to create a strong public opinion in the Sinhalese electorates in the South against the proposed constitutional reforms and also against holding an investigation into the allegations of war crimes by the armed forces of the Lankan Government.

The rhetoric that the Opposition uses for mobilising the support of the Sinhalese electorate contains the message that they should strongly oppose the enactment of a new Constitution at this stage as the drafters of the Constitution are motivated by an agenda for dividing the country.

They also contain the message that they should strongly oppose the creation of a tribunal for investigating alleged war crimes since such a tribunal with foreign judges, according to them is aimed at punishing ‘war heroes’.

Leader of the Opposition, Mahinda Rajapaksa, issued a media statement on March 17, urging the Government and the Sri Lankan delegation in Geneva to refrain from co-sponsoring the Resolution already drafted and said, “co sponsoring the same would effectively be a betrayal of the people of Sri Lanka.”In view of the strong opposition expressed by the Leader of the Opposition and also by the President, to co-sponsor the resolution, the people of the country were in a state of uncertainty as to what position the Sri Lankan delegation would take when the resolution regarding Sri Lanka is taken up for discussion.

During the course of the interactive dialogue with the High Commissioner for Human Rights, Minister Thilak Marapana, explained the various steps taken by GOSL for implementing the recommendations of Resolution 30/1. He explained the reasons for the delay or the inability to fulfil some commitments.

For example, he said, there is no provision in our Constitution for appointing foreign judges to sit with Sri Lankan Judges in a tribunal that would be constituted to investigate alleged violations of human rights and humanitarian law, by members of the armed forces and the LTTE, during the last stage of the war.

The UN is now sufficiently equipped with effective instruments to deal with states refusing to fulfil undertakings given to the UNHRC.