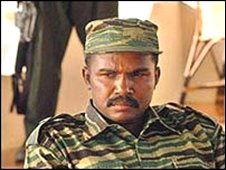 People’s Rights Group (PRG) Calls on the Government of Sri Lanka to Investigate and Prosecute Mr.Vinayagamoorthy Muralitharan a.k.a Karuna Amman for war crimes and other Human Rights Abuses

An investigation into many war crimes charges against him was long overdue. Allegations of his brutal crimes were never investigated when he defected from the LTTE in 2004 and collaborated with the Sri Lankan armed forces and helped in defeating the LTTEthe Tigers. Mr. Karuna was arrested in the United Kingdom on travelling with a false passport but was released after four months in custody reportedly due to insufficient evidence to convict him for any criminal offenses in the UK. Thus, he has never been held accountable for his alleged terror acts and crimes against humanity.

PRG is however of the considered view that his alleged crimes are not only punishable under the Penal Code of Sri Lanka but also war crimes and crimes against humanity. Although renewed public outcries recently highlighted the need for holding him to account, only when he admitted killing 2,000-3,000 soldiers in one night at Elephant Pass during the bloody civil war in 1990s, and boasting that he was more dangerous than the Coronavirus, his terror and criminal records however stretched far beyond. They included countless other grave abuses, including the brural massacre of Buddhist monks in Aranthalawa, and unlawful killings and attacks on innocent civilians in Sinhala and Muslim villages. During the bloody civil war which spanned over 30 years, the LTTE forces under Mr. Karuna’s command were also implicated in the summary execution of several hundred police officers in June 1990 after they had surrendered to the LTTE. In July 1990, his forces allegedly halted a convoy of Muslim pilgrims crossing through the Batticaloa district and executed 75 of them, including women and children. Then in August 1990, his forces allegedly executed more than 200 civilians in two incidents- known as the Kattankudy Mosques and Eravur massacre – which massacres-which occurred in the Batticaloa district. He was also allegedly responsible for the brutal massacre of Buddhist priests at Aranthalawa.

RSF The organisation, (Reporters without Borders) also alleged that he was responsible for the execution of local journalists opposed to the Tamil Tigers. He and his men have also been accused by the United Nations and Human Rights Watch of recruiting children and of going to the houses of Tamil families to forcibly recruit young children in the war against the State. Further, families that recessed were also reportedly harassed and threatened and their children kidnapped. In particular, according to a report by Amnesty International, Karuna faction members were said to have taken part in the execution of civilians.

These alleged acts of terror therefore constitute crimes against humanity, and thus there is no prescription against crimes of this nature; they can be tried at any pointed time. Sri Lanka being a member of the United Nations and also in the light of its commitment to abide by the rule of law, its law enforcement authorities are thus obliged to initiate inquiries into Mr. Karuna’s alleged offences and abuses.

PRG therefore calls upon the Government of Sri Lanka to give this matter its serious attention, initiate serious impartial investigation into the series of criminal allegations against Mr. Vinyagamoorthy Muralitharan a.k.a Karuna Amman and prosecute him for war crimes and grave human rights abuses, and also explore the possibilities of bringing these atrocities as a complaint to the attention of the International Criminal Court to be dealt with according to international law and justice. It is in the best interest of the nation that these types of crimes committed with gross impunity should not escape justice.