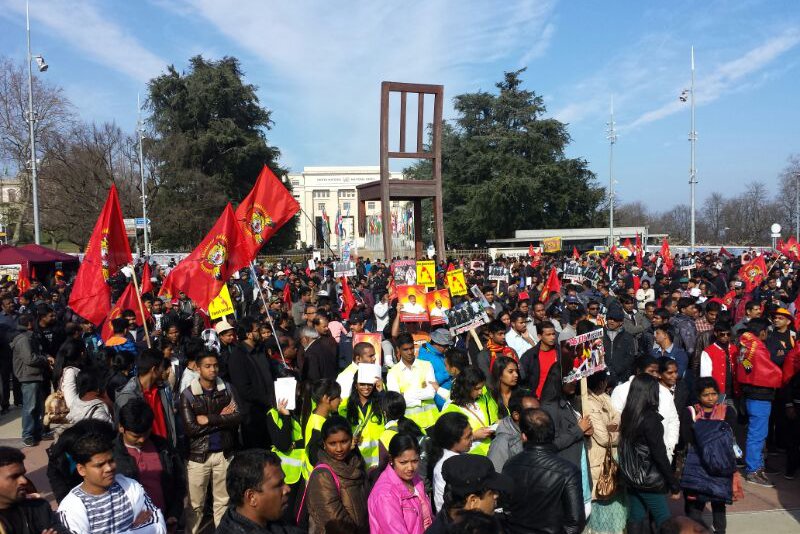 International Community must continue to exert pressure on Sri Lanka to facilitate faithful implementation of all aspects of the UNHRC resolution – Global Tamil Forum.

As the United Nations Human Rights Council (UNHRC) meets in Geneva this month and the High Commissioner for Human Rights Zeid Ra’ad Al Hussein prepares his oral report to be presented later in the session, the Global Tamil Forum (GTF) appeals to the International Community to remain fully engaged with Sri Lanka to ensure that all aspects of the UNHRC resolution A/HRC/30/1 are faithfully implemented.

The pursuit of truth, justice for victims and accountability are essential elements of the healing process in post-conflict societies that have suffered systematic violations of human rights. The adoption of a consensus resolution last year at the UNHRC – which recognized terrible crimes committed by both parties during the armed conflict – was a turning point for human rights in Sri Lanka.

Although far from perfect, GTF endorsed the Guiding Principles of the resolution co-sponsored by the Sri Lankan government, and consistently welcomed the progressive changes implemented in Sri Lanka during the last 18 months. These included significant improvements in democratisation, the rule of law and increased freedoms experienced by most citizens. From a Tamil perspective, we welcome the releasing of some prisoners and lands, and the less triumphalist approach adopted during the end of war anniversary on May 18th. We also welcome the much improved cooperation with UN agencies on human rights mechanisms, and the initiatives taken towards setting up the ‘Office of the Missing Persons’ – though there is much to be desired on the pre-consultations carried out. And, like many others, we are keenly watching the developments regarding constitutional reforms, having submitted our own proposal to the consultative committee.

However, GTF is deeply concerned about the lack of progress on the many issues affecting Tamils in the North and East as reflected in the resolution – such as the release of hundreds of detainees held under the notorious Prevention of Terrorism Act (the Act itself has not been repealed despite repeated promises by the government), the return of land held by the military (large swathes of land is yet to be returned to rightful owners), investigations into the tens of thousands of forcibly disappeared people, and the removal of the military from civilian affairs. Overpowering militarisation and its pervasive influence in civilian affairs is severely impeding full normalisation in the North and East, and the government has yet to come up with a credible plan for the demilitarisation of the region.

Further, the UNHRC resolution calls for the inclusion of “Commonwealth and other foreign judges, defence lawyers and authorised prosecutors and investigators” in a Sri Lankan judicial mechanism. This aspect of the resolution – a negotiated and compromised clause – is crucial, as Sri Lanka has time and time again shown it is both unwilling and unable to investigate allegations of war crimes against its own forces or hold perpetrators of grave abuses to account. It appears the government is now trying to back away from this commitment. Given the history of failures of Government Commissions and judicial processes, international participation as specified in the resolution is a must to guarantee the credibility and effectiveness of the Special Court. GTF therefore calls upon the Council Members and the High Commissioner of the UNHRC to urge the Sri Lankan government not to renege on this all important commitment to the UN.

GTF is also disappointed at the government’s insufficient effort in embracing the critically important transitional justice mechanisms, which in our view, should be embedded in the constitutional reform process to permanently end the culture of impunity and to promote genuine reconciliation. A wide range of institutional reforms including the much needed ‘security sector reform’, strengthening of the witness protection legislation which at present falls far short of what is required, and genuine consultations with victims and their families in every step of the process to get to truth and justice are vitally important measures ought to be undertaken by the government without delay.

At such a critical time when the Sri Lankan government’s political will and its ability to fully implement the key recommendations of the UNHRC resolution are being questioned, the International Community needs to resolutely engage, so that Sri Lanka stays on course towards genuine reform, and implements the resolution it co-sponsored without any exceptions. The High Commissioner’s oral update on Sri Lanka and discussion provides an excellent opportunity to Council Members to raise the specific issues highlighted in this statement and call for accelerated action by the government.

The last thing Sri Lanka needs at present is a pre-mature recognition of its perceived progress. The resultant loss of momentum, we are afraid, has the potential to derail the limited progress made so far, leading to the re-emergence of a sense of despair among the Tamil people in Sri Lanka.

We, therefore, strongly urge the International Community to stay engaged to make Sri Lanka’s transition a long term reality of peace, justice, political power-sharing and prosperity for all its peoples.