“In this instance, If the Inquiry is to be Independent it must necessarily be International” – Sumanthiran MP 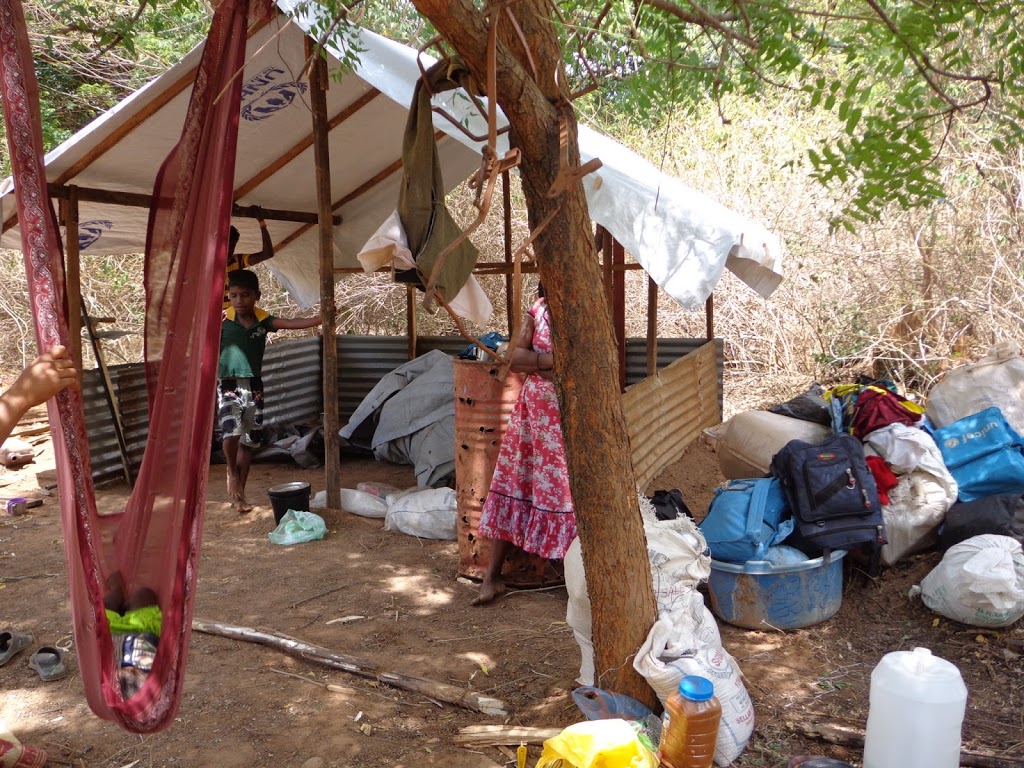 MA Sumanthiran M.P.
Thank you Mr. Deputy Chairman.
The Hon. Minister for External Affairs concluded with a question: ‘Is this right? Can we be happy with the way our Motherland is being treated by the United Nations system?’ I’d like to suggest that the question – more relevant question and the more serious question is not that. Is this how our Motherland should treat us, who are also citizens of this country?
Merely because we are inferior in number that the greater in number should treat us as second class, or worse, third class citizens of this country. If you can answer that question in good conscience as you claimed then most of these issues can be resolved.

Counting the number of countries that he said have co-sponsored this Resolution, even in that I’m saddened that he was not up to date. Perhaps his colleague in Geneva does not keep him apprised of what’s happening there. He should have been there, not his colleague. He has probably read the newspapers that said 32 countries have co-sponsored the resolution when in fact 43 countries, Hon. Minister, let me set the record straight, 43 countries have co-sponsored the Resolution and your colleague in Geneva is obviously not keeping you updated on what’s happening there. You’re 2 days late. Obviously you’re not getting information. You’re reading newspapers and gathering information.

(interruption) The Hon. Minister made an appeal to us not to disturb him when he spoke. After he made that appeal we did not disturb him. He does not have the grace to tell his backbenchers to do the same to us. This is how you treat the minorities in your country. You claim a privilege; you get all upset when you are corrected. We respected you when you spoke and didn’t say a word after you appealed to us to remain quiet when you spoke. But you sit there dumbfounded when your backbenchers treat us like this. This is your problem. This is precisely the issue in this country. You think that because we are a numerical minority we don’t have a voice? That we cannot speak? Absolute arrogance…(interruption)

Speaker: Hon. Azwer, please sit down
M.A. Sumanthiran: You do not know what is happening to your own community. You are a purchased commodity.

Speaker: Hon. Sumanthiran, don’t attack him, continue with your subject.

M.A. Sumanthiran: No, he is a purchased commodity.

The amendment that is being moved today is only to extend the validity period of the Resettlement Authority from 6 years to 9 years. The Hon. Minister for External Affairs chose to speak on the Resolution in Geneva rather than on this Bill. I will speak on this Bill first and then deal with some of those matters that he raised as to what is happening in Geneva. Perhaps he has been given the forum there to give vent to his feelings and he has chosen this Parliament, the only forum that has been made available to him, so although not directly relevant he dealt with those matters.

The Minister for Resettlement very correctly answered questions that were posed while he was on his feet, by the Hon. Member for Hambantota from the UNP and revealed many truths. We’ve had the greatest respect for the Minister for Resettlement. From the time he was appointed to that post, he has chosen, and has always been careful to include us, to consult with us. I remember the very next day he sent a note from there saying that he wanted to have discussions with us, and he has acted in that good spirit. In that spirit he answered truthfully the questions that were posed to him by the Hon. Member for Hambantota. He said that 470 houses have been built by the government in 4 years. Utterly shameful. If that is your resettlement, surely 3 more years is not enough for you. Aren’t you ashamed to admit to this House that that is all you can do when there were over 250, 000 houses that were razed to the ground? We have raised this from 2010 – from the mini budget in 2010. What is the government doing about this? We had to appeal to India. India promised 50,000 houses. Only 1000 are in the process of being made.

Minister for Commerce is interfering. Because of his interference and (that of) another cabinet colleague of his from the North even the implementation of the (construction of) houses in the North have been so delayed that the beneficiary list could not be settled for so long, after four years.

The vote has been carried in Geneva. I’d like to inform the Hon. Minister for External Affairs of the happy news that the resolution has been carried with an overwhelming majority, with only 13 voting against.

The Hon. Minister for Resettlement during his speech conceded that there were some houses that were built down Madu Road in the Mannar district. That is true, 52 houses were built. Now we asked that question – in 2011 October 23rd in this House I placed a report in which we even gave pictures of those houses. I’d like to ask the Minister one question about that. How many Tamil people have been given houses out of those 52 houses? Not one. Now I don’t mind other communities being given houses. I’m not against that. I think other communities – Sinhalese – who lived in the North must come and live. We welcome them to come back and live.

Muslims who were very wrongly chased away from the North must come back and live, and we support that process. In fact my Party Leader has even given it in writing to India, saying that Muslim persons must be given houses in the houses that they allocate. But I am asking this question, out of those 470 houses, I know that in one lot of 52 houses, not even one Tamil family has benefited out of those. Now why is this? Why do you treat the Tamil people like this? You do that and then you bitterly complain that the United Nations is passing a resolution to promote reconciliation and accountability in Sri Lanka.

The Hon. Minister asked the question…he criticized the High Commissioner for Human Rights. This happened even in Geneva by his colleague who was rude to the High Commissioner and at least one country protested in the Council itself that the Hon. Minister for Plantation Industries was rude. The Minister for Plantation Industries goes to Geneva while the External affairs Minister sits here. The Minister for External Affairs also should be careful. He constantly referred to the High Commissioner for Human Rights as ‘Navanathan Pillay’. She is not ‘Navanathan Pillay’. You must know that it is a basic tenet that you pronounce the name of the person (correctly) – that is how you respect that person. She is Navanetham Pillay, not ‘Navanathan Pillay’.

Now I want to say something about international investigations since such umbrage is being taken at the word ‘international’.

There are credible allegations against both sides that fought the war. One is the LTTE, the other is the government of Sri Lanka. Can you have an inquiry conducted by one of those accused persons? Can that ever be acceptable? Any inquiry must be independent, nobody can dispute that. Any inquiry must be independent. And in this instance, if the inquiry is to be independent it must necessarily be international. How can you have a local inquiry when one of the accused persons is the government of Sri Lanka, and that has been conceded to by no less a person than His Excellency the President in the Joint Communiqué that he signed on the 26th of May 2009?

“In this instance, If the Inquiry is to be Independent it must necessarily be International”

He’s talking about bullying, countries being bullied. Who is being bullied within the country? Who is being bullied within the country? The Hon. Leader of the Opposition, just one day in Jaffna recounted his own experience. When the people there are being bullied by your military intelligence personnel? You can’t have one meeting there. Muslim women can’t walk on the streets of this country today in their traditional dress. In Manampitiya, Hon. Minister, a young girl in an abaya, was walking and she was attacked. She has made a complaint to the Polannaruwa police. On the day the Mattala airport was opened, the same night a church in Weerakettiya was attacked by a mob, unfortunately led by religious leaders – by Buddhist monks. And they go and demonstrate before the Indian High Commission saying two venerable monks have been attacked in Tamil Nadu. We condemn those attacks. We don’t support that. No monk should be attacked in Tamil Nadu.

But why aren’t they complaining about the church being attacked in Weerakettiya, in your own country, before you look at other countries? Why aren’t they going in processions protesting that Muslim women are being attacked on the road? You don’t go on processions for that, you only have to complain about other countries. Look at yourself, inside, first. You put your house right. If you put your house right no one else will ever be able to point fingers at you. You have this happening in your own country. You treat people who are numerically in the minority like dirt, and then you have the brass to stand up and pontificate about international interference and call that bullying. When you get a little bit of the taste of your own medicine you are smarting but you can’t understand how much we feel being treated like dirt in this country. You talk about changing the goal post. What did your government do? They started talks with us. You were in that delegation that talked with us. 10th of January 2011, 3rd of February 2011, 18th of March 2011. All 3 times we gave proposals to you. You are the government. You had nothing to say. You had no proposals to give. You could not even respond to our own proposals. For 5 months and 7 meetings you came and sat there.

In resettlement, what is the progress that you have made? The LLRC at paragraph 9.134 very specifically says ‘the government must disengage security forces from all civil administration related activity as rapidly as possible’. That has not been done. It is because the security forces have not been disengaged and it is because they occupy land that people have not been resettled. The Hon. Minister for Resettlement was very forthright. Talking about Keppapilavu he said ‘I have no authority. When they’re able to be resettled there I can do that. But now they are in temporary places.’ Why are they in temporary places? Because there’s a large military cantonment that has been built in Keppapilavu and people are being kept out. What has happened in Mullikulam. Hon. Minister for Mannar district will know what has happened in Mullikulam. What has happened in Valikamam North? What has happened in Sampoor? Why aren’t people being resettled?

Thank you.
(Text of Speech made in Parliament on 21st March 2013 during debate on the Resettlement Authority Bill)