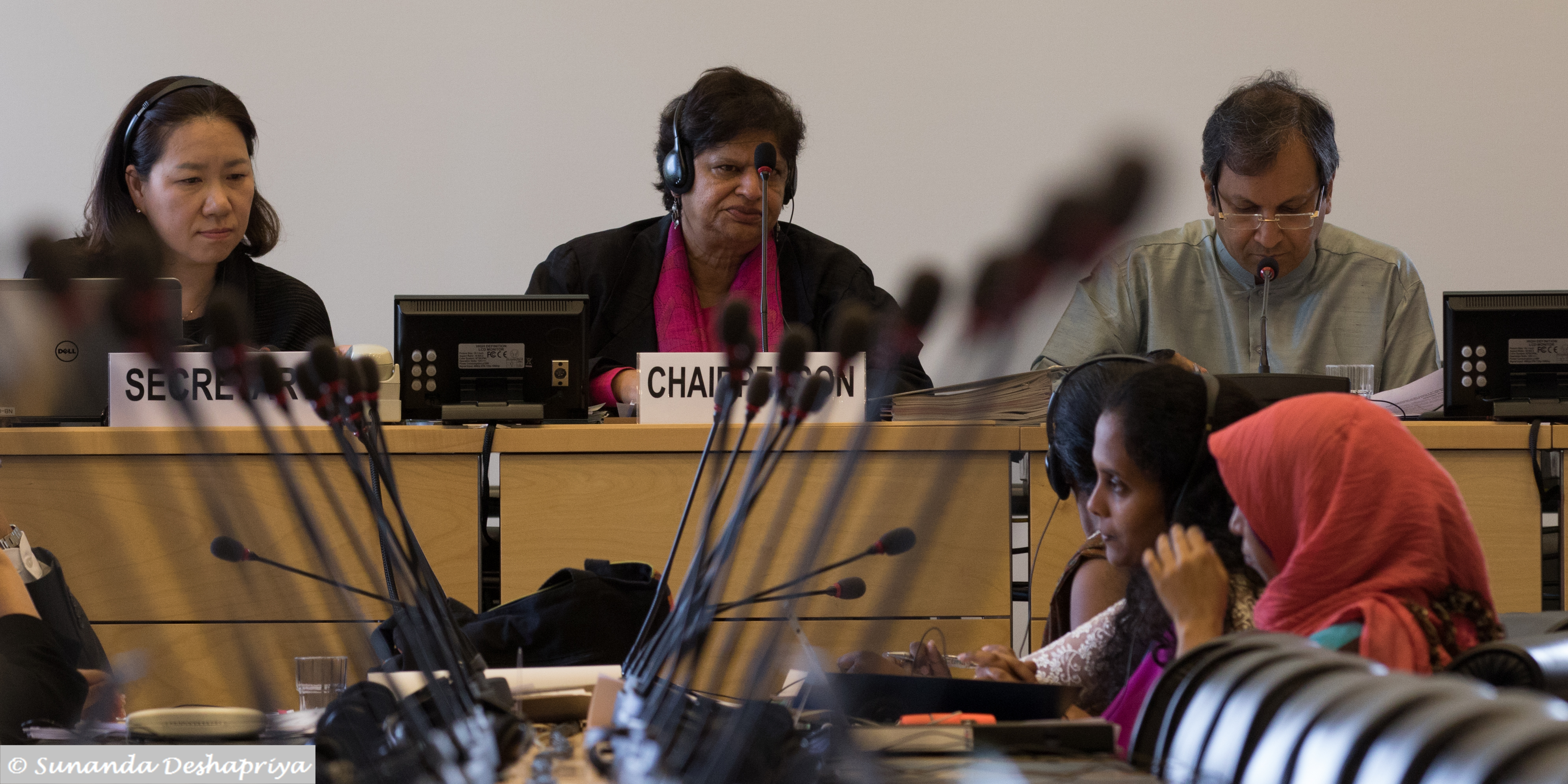 Image: Chairperson, Secretary of the CESCR and Sri Lanka ambassador  at the podium of UN CESCR 61 held at Palais Wilson on 9th June 2017. ©s.deshapriya.

Violent attacks on minority religions have continued with impunity specially against Evangelical Christians And Muslims in Sri Lanka. The government of Sri Lanka accepted recommendations of the UPR on religious freedom in 2012, however, since then over 500 incidents of violence, discrimination and intimidation have been recorded against evangelical Christians and Muslims. These incidents have been documented by the National Christian Evangelical Alliance and Muslim Peace Secretariat of Sri Lanka. Last 5 months alone over 30 incidents against evangelicals and in the last three weeks alone 22 incidents against Muslims have been recorded. The attack on Muslim community increases during holy month of Ramadan and this trend has been there since 2011. Most of such attacks have been on the mosques or insulting faith and its doctrines in public spaces and provoking counter attacks.

Grave concern of the minority religious community is that in the last 2 years there has been an increase in state involvement concerning persecution of Christians and Muslims. There have been incidents where local government officials have been actively involved in supporting violent attacks, discrimination and intimidation apart from Buddhists extreme religious groups. Notably, in some instances basic needs such as water, land, housing and electricity connection have been denied to Christians by local government officials in Sinhala majority areas. Furthermore, in contravention of the law, local government authorities claim that churches and mosques are unauthorized, demanding them to register with the state. A misapplication of a discriminatory circular issued by the Budha Sasana (religious affair) Ministry in 2008, serves as the basis for such demands.

It is interesting to note that this circular is not applied when Buddha statues and Dhagapas are erected over night in the areas where Muslim and Tamil communities are majority. Such Budhisization is overtly promoted by the ministry of Budha Sasana with the help of local officers, Sinhala extreme groups and leading politicians.

We kindly request the committee to include in its concluding observation as recommendations:

1. State inaction to a certain extent patronage to the well-known perpetrators specially Buddhist Extremists groups should be addressed immediately.

2. Cancellation of the Circular 2008 issued by the Ministry of Buddha Sasana and Religious Affairs, which is used as a discriminatory tool against religious minorities, particularly the Muslim and Christian community

3. A mechanism needs to be implemented to hold local government officials responsible for discrimination / active participation of persecution of religious minorities in the country.

We request the committee to ask the SL govt. the following question:

Why is the state not ensuring that the law and order is upheld, particularly in the backdrop of scaled up and overt violence and intimidation against minority religions?

(Presentation made by  Shreen Saroor in relation to Article 15 – Right to culture of the ESC rights convention on the Attacks on Minority Religions at the briefing held at Palais Wilson in 8th June during the CESCR 61.)