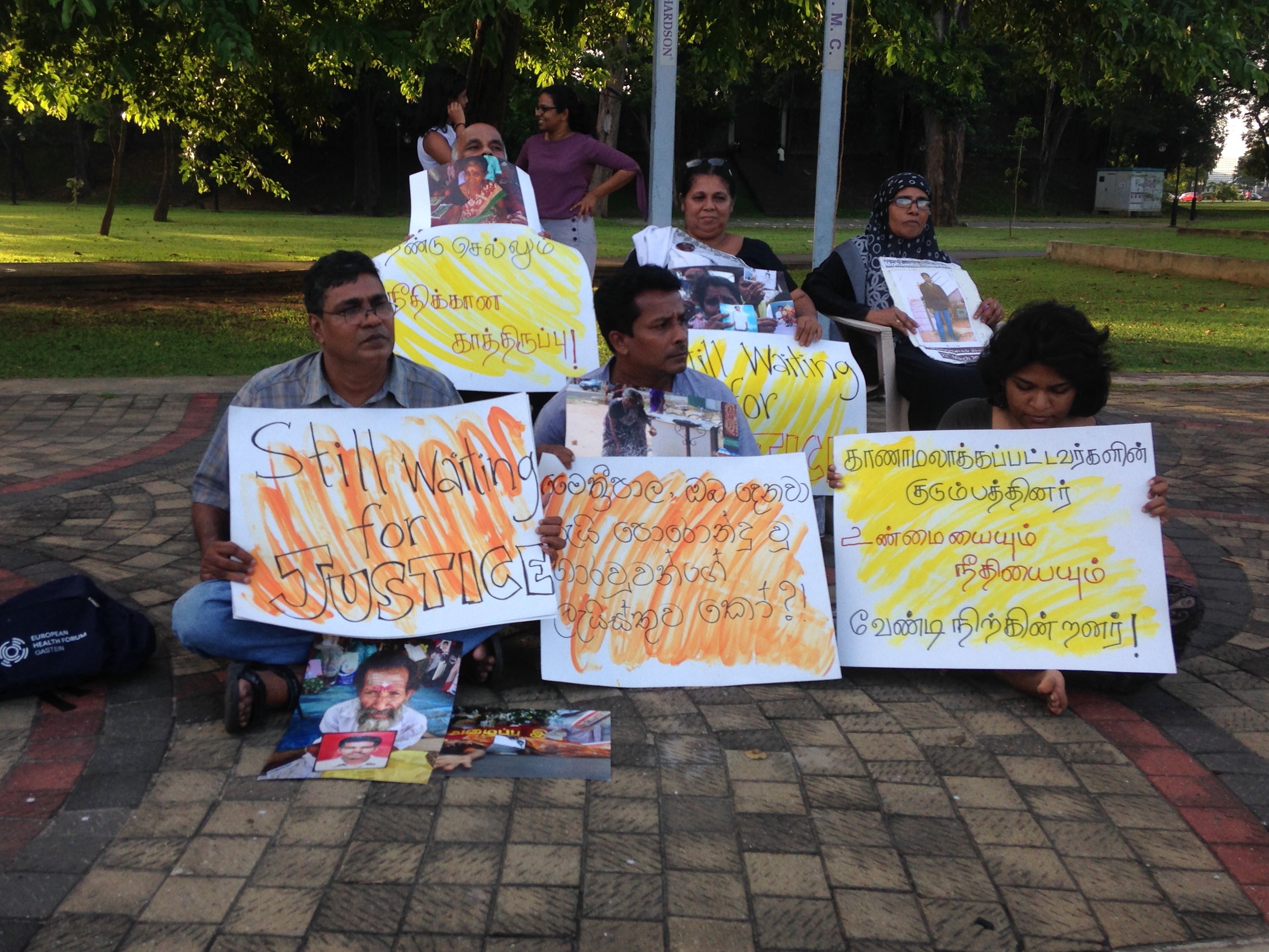 Enforced disappearance is one of the most horrific crimes known to humanity. For decades, the people of Sri Lanka have lived in fear of enforced disappearances, and have suffered its cruel consequences. Enough is enough, President Sirisena. End the suffering now. Provide families of the disappeared with the truth, justice, and reparations they are entitled to.

What happened to our loved ones? Tell us their fate and whereabouts

Tamil families of the disappeared in Kilinochchi, Mullaitivu, Vavuniya, Maruthankerny, and Trincomalee, continue to protest demanding truth and justice for their loved ones, with some having reached 500 days this month and others approaching 500 days. These protests come after families have exhausted most other avenues, including appearing before previous commissions of inquiry and other investigative mechanisms, making appeals to various state institutions, filing complaints with the Police and Human Rights Commission, making enquiries with the Army and Navy, and appealing to international bodies. In sheer desperation, they began and continue to protest. Their demands are simple: they want to know the fate and whereabouts of their loved ones, and they want justice. To date, they have been denied these demands.

The protesting families, led largely by women, have endured considerable physical, emotional, and financial difficulties since the protests began in February 2017, as well as intimidation at the hands of state security personnel. At least seven of the protesting mothers have died in the 500 days since the protests began, indicating the severity of the conditions in which they continue to seek truth and justice. They died without knowing the fate and whereabouts of their loved ones. For them, and many others outside of the protest groups, truth and justice is already too late. How much longer is the Government going to indifferently observe as the well-being of these families continue to deteriorate? President Sirisena, it is imperative that you urgently address the demands of the protesting families and provide them the truth and justice they seek.

The OMP must deliver results

In the search for truth and justice, families have been subjected to numerous commissions of inquiry and other investigative mechanisms over the years, none of which provided the truth and justice families sought. Families are exhausted from repeatedly going before state institutions and retelling their harrowing stories, with no answers being given and no accountability following. For this reason, many families have no trust in yet another state institution charged with giving answers that so many previous bodies failed to provide. In order for the Government of Sri Lanka to gain the trust of these families, the OMP must deliver results. The OMP must have strong international involvement that goes beyond mere advising, monitoring, capacity building and funding, which will help build trust amongst many families, and contribute to the independence and effectiveness of the Office. The OMP must provide answers to the fate and whereabouts of families’ loved ones. In the interim, the OMP should provide a time line for their operations, and an indication of how they plan to prioritise cases.

President Sirisena, you must ensure the OMP has the necessary independence and resources to discharge its duty to families, and provide answers on the fate and whereabouts of their loved ones.

Stop attacks on families and supporters

The ongoing harassment, threats, intimidation, and physical attacks on families and their supporters, by security personnel and unknown persons, is completely unacceptable. You must ensure that such practices immediately cease, and those responsible are punished accordingly. President Sirisena, you must ensure that families and their supporters can demand truth and justice for their loved ones without being threatened or intimidated to stop their campaigns, and that those responsible are held to account.

Lack of progress in ongoing cases

In a memorandum handed to you in your meeting with families in June 2017, families made five key demands:

The Government’s promises to families

In your meeting with families in June 2017, you made the following promises:2

President Sirisena, to date, you have not honoured the promises you made to families.

In solidarity with families of the disappeared in the North and East, we, the undersigned, demand that the Government of Sri Lanka gives effect to the promises made to the families, as a matter of priority.

We make the following demands to the entities below in order to hold the Government accountable for the promises made to families:

In addition, we demand that:

1 The President’s meeting with families of the disappeared, http://www.president.gov.lk/president-meets-family-members-of-missing-persons/.

2 The President’s meeting with families of the disappeared, http://www.president.gov.lk/president-meets-family-members-of-missing-persons/.