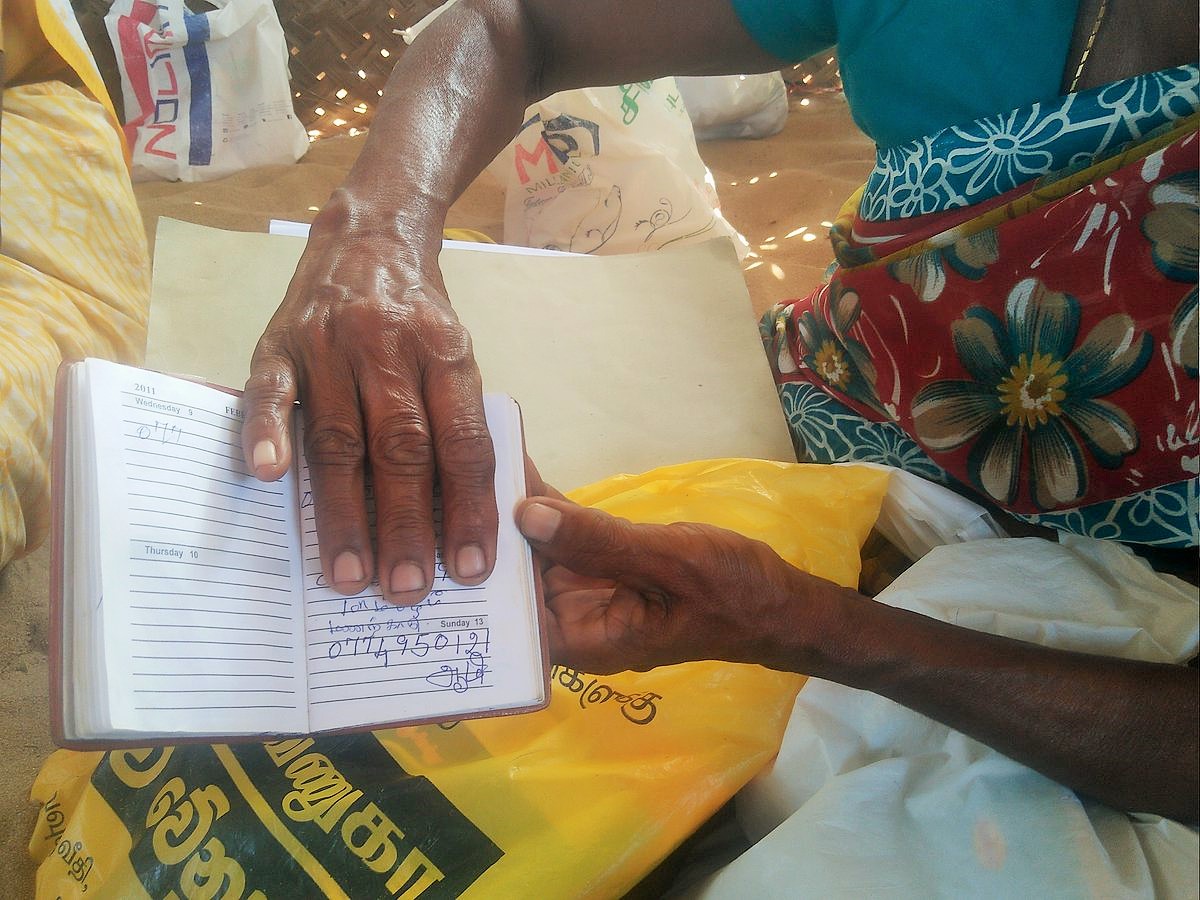 Image: A protesting mother showing the mobile phone number her son called her in 2012 from undisclosed detention center. ( Vikalpa photo)

(February 20, 2018)  Today marks one year since Families of the Disappeared took to the road in Kilinochchi, Marunthankerny (Jaffna), Vavuniya, Trincomalee and Mullaitivu demanding answers about the fate of their disappeared loved ones. Despite meetings with President Sirisena last year in which he agreed to meet the families’ demands for the release of lists of all detainees and surrendees as well as the release of all prior commission reports, to date no action has been taken to meet those demands. The undersigned civil society organizations stand in solidarity with the families’ as they continue to rightfully demand truth and justice and turn to the international community for support in these demands.

The Sri Lankan government presented the Office of Missing Persons (OMP) as the answer to addressing enforced disappearances last year. Many families of the disappeared were justifiably skeptical of the OMP from the very beginning of the formation of the Act as were we, given the lack of consultation and the secrecy with which the Act was drafted and then passed. After years of failed commissions and inquiries, families were doubtful of the government’s will to actually address disappearances through yet another mechanism. Yet families and civil society took the opportunity multiple times over the last year since the Act was passed to voice their requirements for what would make the OMP a credible process for them, and still their voices went un-heeded.

Calls for the process of nomination of OMP Commissioners to be transparent and conducted in consultation with the families were completely ignored. Even now, the only information available to families and the wider public about who has been nominated as Commissioners is through unconfirmed news reports. Instead, the President has blatantly ignored the provisions in the OMP Act around the appointment of Commissioners and allegations of political deal making within the Constitutional Council abound.

Repeated calls for the OMP to be established alongside a concurrent prosecutorial mechanism to ensure that justice could be delivered to families was also ignored. Families have been clear that they require truth and justice, and are concerned about the OMP’s side-lining of the latter. The failure of the government to set up a real accountability mechanism also calls into question the OMP’s ability to function. Without fear of prosecutions or any type of accountability what reason is there for the security forces to divulge details of what happened to the disappeared?

But most importantly the President’s promises to families in their meeting of June 12, 2017 to release the lists of detainees and surrendees have gone unfulfilled and furthermore been reneged on. The importance of meeting these demands to build the confidence and trust of families of the disappeared cannot be understated. Without meaningful buy-in from families of the disappeared any mechanism to address disappearances will fall short.

Families of the disappeared have now been on the road for 365 days through sweltering heat, rain and dust. Many actors have now come to refer to the protests as “politicized” or “politically-motivated” because the families espouse views that do not reconcile with notions of “good governance” and “regime change”. This rejection of the families lacks the basic humanity to understand the depths of pain and frustration the families feel every day as their pleas for truth about their loved ones go un-answered. Every day that they do not know what happened. Families chose to go on the road out of desperation because this government failed them – and continues to fail them.

The international community’s ‘soft diplomacy’ approach to Sri Lanka has only served to allow the government to place issues of truth, justice and accountability on the backburner, undermining any possibility of meaningfully addressing disappearances whether through the OMP or otherwise. Until and unless the voices of families of the disappeared are taken seriously in any efforts to address them, Sri Lanka will continue its cycle of letting down its most marginalized, and families will continue to suffer every day, wondering what happened to their loved ones.

We unreservedly endorse the plea of the families and urge that the international community and institutions take responsibility for finding a solution to enforced disappearances in Sri Lanka.

It is time for all concerned to take the suffering of our families seriously.

People for Equality and Relief in Lanka (PEARL)