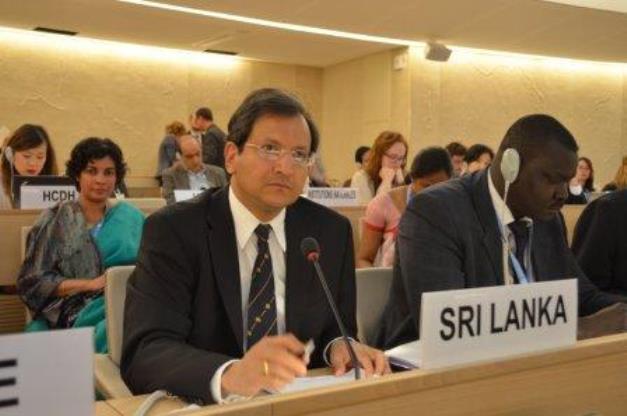 ” In all these Transitional Justice processes, the Government and Government institutions work closely and in consultation with the United Nations system and the OHCHR as well as other international experts. We are also working closely with ICRC, especially in the area of dealing with the missing, including the technicalities of the establishment of the Office on Missing Persons, the training and capacity building requirements as well as obtaining expertise and sharing experiences of other countries that have similar mechanisms.”
Ravinatha P. Aryasinha’ Sri Lanka Ambassador in Geneva told HRC 33rd session today)

Thank you for this opportunity to share our views on the report (A/HRC/33/51/Add.2), presented to this Council by the Working Group on Enforced or Involuntary Disappearances (WGEID), following the visit to Sri Lanka, from 9-18 November 2015, at the invitation of the Government.

The Government was pleased to welcome the 3-member delegation of the Working Group, particularly as the visit took place after 16 long years.

It is important to note that this visit took place just ten months after the election of a new President and three months after Parliamentary Elections and the formation of a National Unity Government bringing together the two main political parties in the country for the first time in our country’s history. This historic step has allowed us to better address issues of priority in our country that include reconciliation, strengthening democracy, good governance, human rights and inclusive, equitable and sustainable development.
The Working Group was welcomed, and all requests were facilitated to the extent possible, including providing unhindered and unrestricted access to all places that the Group sought to visit.

We are pleased that the Working Group, in its Report, has “appreciated the openness and cooperative disposition of the officials”.
The Government considers its engagement with this Working Group as an important component of the reconciliation efforts in the country.
The visit took place at a time when the Government had expressed its intention of establishing an Office on Missing Persons by an Act of Parliament, and was in the process of seeking ideas in this regard from the public, officials and experts in the country who had worked on issues related to the Missing in the past; victims; groups that work with the families of the missing; and international partners as well.
Following the issuance of the ‘advance unedited version’ of the Working Group’s report on its visit, Sri Lanka provided comments on 29 April 2016. We appreciate that the comments by the Government have been published as an addendum (A/HRC/33/51/Add.6) to the Report and also circulated as an official document to this Council session.

As stated in the Report of the Working Group, the Government has embarked on a comprehensive public policy based on a participatory framework with the objective of ensuring the right to truth, justice, reparations and guarantees of non- recurrence. In this regard, the Government has already taken concrete legislative and policy measures to translate its promises to the people of Sri Lanka, into action even amidst the many challenges being posed by certain extreme elements who attempt to pose obstacles to the Government’s sincere efforts at ensuring that the rights of all persons are promoted and protected and recurrence of violations that happened in the past are prevented.

Some of the important steps taken since the visit of the Working Group in November 2015 include;

(i) Ratification of the International Convention for the Protection of All Persons from Enforced Disappearance on 25th May 2016. The process of drafting enabling legislation to incorporate the provisions of the Convention into Sri Lanka’s domestic law through an Act of Parliament, is underway. This should be presented to the Cabinet and thereafter to Parliament shortly.

(ii) The Parliament, on 11 August 2016, passed without a vote, legislation to establish an independent ‘Office on Missing Persons’ (OMP).Following its certification by the Speaker on 23 August 2016, the legislation has now been gazetted as the Act. No. 14 of 2016.

Currently, steps are being taken to allocate funds for the Office on Missing Persons in the Budget for 2017 which is to be presented to Parliament in November this year.

In this regard, Mr. President, we are pleased to say that the Office on Missing Persons has been endowed with the recommendations made by the Working Group in paragraph 79 of its Report and the Office also has the provision to enter into agreements with organizations including international organizations in the pursuit of its work.

(iii) On 25th August this year, the Parliament approved the Bill to amend the Registration of Deaths (Temporary Provisions) Act No 19 of 2010 for the issuance of ‘Certificates of Absence’. This enables the families of missing persons to apply for benefits under social welfare schemes; temporarily manage, under the supervision of the District Court, the property and assets of the missing person and act as a provisional guardian for dependent children of the missing person. The issuance of this certificate will not halt any investigations to determine the fate of a missing person.

The OMP Act does not compromise the victims and their families’ ‘Right to Justice’.

While the Government has proposed to establish a Truth-Seeking Commission, a Reparations Office and a Judicial Mechanism, also by statute, presently, wide consultations are being carried out in the country to seek the views of all stakeholders regarding the mechanisms that should be set up. This is being done by an Eleven-member Consultation Task Force on Reconciliation Mechanisms consisting of representatives of civil society and zonal task forces in districts appointed by the Task Force. This process of consultations was also opened up to anyone overseas who wished to provide input to the Task Force through e-mail or even by meeting members in Sri Lanka or other web-based means. The Task Force is expected to hand over its Report to Government in mid-October after which the process of designing the mechanisms outlined will take place.

The Consultation Process, designing and drafting of legislation for the reconciliation mechanisms, and follow-up regarding their establishment are being coordinated by the Secretariat for Coordinating the Reconciliation Mechanisms (SCRM), set up by the Cabinet of Ministers and is placed under the Office of the Prime Minister.

In all these processes, the Government and Government institutions work closely and in consultation with the United Nations system and the OHCHR as well as other international experts. We are also working closely with ICRC, especially in the area of dealing with the missing, including the technicalities of the establishment of the Office on Missing Persons, the training and capacity building requirements as well as obtaining expertise and sharing experiences of other countries that have similar mechanisms.

Legislative measures related to ensuring the non-recurrence of disappearances and of ensuring justice wherever such incidents occur also include the Right to Information Act approved by Parliament on 24 June and certified by the Speaker on 4 August this year; the review of the Witness and Vitim Protection Act with assistance from the UN; the formulation of new counter-terrorism legislation which would see the eventual repeal of the Prevention of Terrorism Act where we are obtaining the assistance of the UN Counter-Terrorism Executive Directorate; and the Constitution Amendment process that is currently underway.

On the 18th of June, the President issued to the tri-forces and police, strict instructions to be followed when arresting and detaining persons. Guidelines issued by the National Human Rights Commission were also incorporated into the instructions issued by the President.
In February 2015, Parliament unanimously enacted the Assistance to and Protection of Victims of Crime and Witnesses Act. All parts of the Act are now operationalized. The Cabinet of Ministers recently approved a draft Amendment to the Act facilitating the leading of evidence from remote locations outside Sri Lanka. For the year 2016, the Ministry of Justice has allocated Rs. 2 million for the initial work pertaining to the setting up of the National Authority for the Protection of Victims of Crimes and Witnesses. This allocation will be increased for 2017 in order to facilitate the Authority to commence its work. The Ministry of Justice has also established a Committee to undertake a review of all provisions of the Act and recommend required amendments.

Sri Lanka is also committed to making all possible effort to complete resettlement of the remaining 971 families who are still in welfare camps in the North. The Cabinet of Ministers in August this year, approved the National Policy on Durable Solutions for conflict-affected displacement which was drafted through a process of wide consultations and with the assistance of the United Nations.

The Inter-Ministerial Committee is assisted by a steering committee of officials and experts. Drafting Committees have been set up in 10 thematic areas of human rights drawn from core Human Rights Conventions, consisting of officials and civil society representatives. The draft Plan will be open for consultations with the stakeholders including the civil society working in all thematic areas. Following this, the NHRAP will be sent for the consideration of the Cabinet of Ministers. The Human Rights Commission of Sri Lanka (HRCSL) is engaged in this process and has facilitated the participation of civil society representatives in coordinating the drafting processes. The objective of these processes is to ensure equal rights, justice and dignity for all communities in Sri Lanka. The Committees will also take into account the recommendations of this Working Group.

We believe that engagement with the UN system and the Human Rights Mechanisms is in the best interest of the people of our country, to obtain advice and views, and also expertise and technical assistance that will benefit us in terms of capacity building and ensuring the strengthening of our own local institutions.

Following the Standing Invitation extended on 17 December 2015, to all UN thematic Special Procedures Mandate Holders to visit Sri Lanka, a number of Special Rapporteurs, in consultation with the Government regarding Sri Lanka’s priorities, have already undertaken visits representing a broad range of mandates.

The Special Rapporteur on the promotion of truth, justice, reparations and guarantees of non-recurrence, Mr. Pablo de Greiff visited Sri Lanka from 30 March – 3 April 2015, 26 January – 1 February 2016 and in June 2016, in a technical advisory capacity and we look forward to continuing our engagement with him in this capacity.

From 15-16 August 2016 Sri Lanka presented its 10th – 17th Periodic Reports under the International Convention on the Elimination of All forms of Racial Discrimination (CERD) and engaged in a constructive dialogue with the Committee members.

From 1-2 September 2016, Sri Lanka presented its 2nd Periodic Report under the International Convention on the Protection of the Rights of
All Migrant Workers and Members of Their Families (CMW).

From 15- 16 November 2016, Sri Lanka will present its 5th Periodic Report under the Convention against Torture and Other Cruel Inhuman or Degrading Treatment or Punishment (CAT).

The 8th Periodic Report under the Convention on Elimination of Discrimination against Women (CEDAW) will be presented in early 2017.

Sri Lanka receives invaluable assistance through the UN Secretary-General’s Peace-building Fund to implement some of the important steps in the areas of transitional justice, reconciliation, good governance, and resettlement and durable solutions.

While constructive engagement with the Special Procedures and the UN system as a whole has already benefited Sri Lanka significantly, and we look forward to continuing our engagement, we also hope that the Government and people of Sri Lanka will receive the support required from the international community as a whole in capacity building and strengthening institutions, and also ensuring economic development which is essential for entrenching the reform agenda undertaken by the Government.