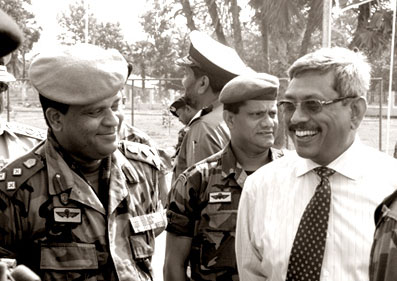 The International Day of the Disappeared is on the 30th August and I was in Mannar when a group of mothers were preparing to show their collective resistance at Omanthai in North and Kalmunai in East. The discussion was around how safe it is to protest even though the emergency has been lifted but the President has signed an extraordinary gazette assigning same powers that is granted under Emergency Regulations to the military. Not so long ago the Rajapaksa government locked up a protesting mother Balenderan Jayakuamri who surrendered her younger son Mahindan to Sri Lanka military. Mahindan was later found among the young LTTE men who underwent rehabilitation in a government photograph but never returned back to his mother. To date Jayakumari has been in and out of courtrooms due to the false chargers brought against her using the notorious Prevention of Terrorism Act. The slogan that the mothers arrived at this meeting was “Men who made our children disappeared are awarded with commanding the military and running for the presidency” Is it the justice promised to us?”

Last week, Gotabhaya Rajapaksa launched his presidential campaign. A strongman who disdains human rights, democratic governance, and the rule of law is trying to capitalize on public fear in the wake of the Easter Sunday attacks to bring back a dark chapter in Sri Lankan history.  Not to be outdone, President Maithripala Sirisena, who risked his life in 2015 to challenge the Rajapaksa regime, demonstrated his complete capitulation when he appointed Major General Shavendra Silva as the Commander of the Sri Lanka Army.

Who are Gotabhaya Rajapaksa and Shavendra Silva?  Patriots or traitors? It depends. Are war crimes, murder, disappearances, torture, and state plunder feats to celebrate? These are the men now in the news. Rajapaksa’s candidacy and Silva’s promotion mark a dangerous step for all Sri Lankans.

During the second JVP uprising in the late 1980s, Gotabhaya was the commanding officer of the First Gajaba Regiment in Matale.[1] A mass grave with 154 skeletons from that period was found there in 2012.  Skulls and hand bones show signs of torture, but the Rajapaksa government buried the case by transferring the magistrate judge and launching an ineffectual commission of inquiry.[2] Radiocarbon testing raised more questions than answers, and the concerns of archaeologist Raj Somadeva were ignored.[3]

Gota spent a decade abroad and returned to Sri Lanka in 2005. He promptly reorganized the security sector, presided over weekly meetings of intelligence agencies, and personally followed up on the progress of arrests and interrogations.[4]  As the war intensified, he ensured there would be no witness.  He expelled the U.N. in September 2008 and barred independent media. Only embedded journalists ready to glorify “war heroes” and the “humanitarian operation” were allowed. News trickled out anyway, with U.N. officials and government doctors documenting indiscriminate shelling of hospitals and firing in no-fire zones.

As we now know, LTTE leaders and even their children were executed at point blank range, reportedly under Gota’s orders.[5]  Women were stripped naked and there have been allegation of sexual abuse. Hundreds who surrendered to Shavendra Silva’s 58th Division with Father Francis Joseph boarded government-operated CTB buses in May 2009 never to be seen since.  The report of the U.N. OHCHR Investigation on Sri Lanka (OISL) would later link the 58th Division to extrajudicial killings and indiscriminate attacks on civilians in Killinochchi, Puthukkudiyiruppu (PTK), Putumattalan, and Mullaivaikkal.  A Ministry of Defence report admitted supervision and “UAV monitoring” of all military operations up through the chain of command, meaning Gota was aware at every step.[6] After the war, Gota heaped praise on Silva for doing a “marvelous job” during its final stages.[7]

To enable his atrocities, Gota fabricated lies.  Anyone who criticized the government, whether the U.N. human rights chief or a peace activist, was a Tiger.  Government doctors were coached until they “confessed” that hospitals were not shelled.[8]  Where truth could not be bent, Gota brought in white vans.  Keith Noyahr and Poddala Jayantha were severely tortured after Gota personally warned Jayantha that if he criticized the army, “people who know how to do it will finish you off.”[9]  Gota commanded two military intelligence officers to abduct and later kill Prageeth Eknaligoda.[10]  He is now facing lawsuits in the U.S. for his role in the murder of Lasantha Wickremesinghe and torture of Canadian Tamil Roy Samathanam.

For years after the war, accountability was out of reach.  Recommendations by the LLRC and Paranagama Commission went ignored.  Mothers of the disappeared and the activists who helped them were detained under the PTA.  Sexual assault survivors were threatened and harassed not to name their rapists.  Habeas corpus cases involving the Father Francis and other surrendees languished; as the responding party, Shavendra Silva stonewalled inquiry into what happened under his command.  There was no progress on even the most emblematic cases.  At the family level, mothers had no space to mourn or protest.  The military took their lands.  Efforts to mobilize before the U.N. were labeled a Western threat to sovereignty. Any attempt to achieve something better for Sri Lankan people was dismissed as an attack on the war heroes.  Of course, a tyrant needs propaganda to quell the masses.

As the regime tightened its grip, Gota’s targets grew wider. BBS hate mongerer-in-chief Gnanasara Thero was given reign to incite mobs to burn Muslim homes and businesses in Aluthgama and Dharga Town.  That thug now has a presidential pardon, a sign of how far  President Sirisena is gone from good governance.[11]

Men capable of torture and murder are no less capable of plunder. Gota was accused of siphoning more than $75 million in state funds to private firm Avant-Garde to establish a floating armoury and setting up a secret offshore account to procure MiG fighter jets from Ukraine.[12] The Rajapaksas took usurious loans from China and built a vanity airport and port at Hambantota.[13] Even as Sirisena won a surprising victory in 2015, it was unclear if Gota would organize a coup.

So that is Gotabhaya Rajapaksa, the man who now stands for election. A strongman who will crush his own people for personal gain. A man who cloaks tyranny as patriotism. And Shavendra Silva, his right-hand man ever since Gota made him his second-in-command in 1987.[14]

The current administration’s failures are without question long.  It ignored intelligence and failed to prevent the Easter attacks.  It has not delivered accountability or security sector reform.  It has reneged on transitional justice promises made to its citizens and the U.N.  It has done nothing to help Tamils rebuild lives shattered by war and has remained silent as mobs now target Muslims post-Easter attacks.  Initial progress on corruption probes resulted in no convictions, and the Central Bank bond scandal shows this government is capable of corruption of its own.  The President has recently shown himself spineless, from unconstitutional moves last October to replace Ranil Wickramasinghe with Mahinda Rajapaksa to more recent moves to pardon Gnanasara and appoint Shavendra as Army Commander.

But there has been halting progress, too.  The 19th Amendment limits unchecked presidential power.  Sri Lanka is now a party to the Convention on Enforced Disappearance. The Consultation Task Force heard from thousands on how Sri Lanka should approach transitional justice.  The Office of Missing Persons is finally beginning its work.  Media freedoms have been restored, and citizen engagement was on full display to prevent a constitutional crisis end of last year. Tamil mothers have a space to protest and mourn. Citizens can use the Right to Information Act to question authorities about their corruption and discrimination. Independent commissions have questioned  the abuse of state power by law enforcement and military.

It is unclear what President Sirisena is thinking in appointing Shavendra Silva as Army Commander, or what the public expects will happen with Gota at the helm.  Those who think Gota would “Make Sri Lanka Safe Again” should remember the state-sponsored terrorism he unleashed. And Sirisena should know that appointing a lawless Army Commander is the opposite of the good governance he promised back in 2015. What happened to the foreign minister’s promise in early 2015—“Unlike the previous government we are not in a state of denial, saying that such violations have not happened.  We believe such violations have happened, and the extent to which it has happened has to be finally decided by the mechanism we set up.  We are ready to ensure that those who have violated human rights in Sri Lanka will be brought to justice through such a mechanism.”  Sirisena’s latest misstep shows how far he has fallen since 2015.

Shavendra Silva’s promotion plays directly into Gota’s hands and is a betrayal of the trust bestowed by victims and affected communities who brought this government to power.  It is a giant step back for justice and the rule of law for all of us.  The government should reexamine the appointment and investigate abuses perpetrated under Shavendra’s command.  It should bring Gota to justice for his role in disappearing, torturing, and killing journalists, ordering point-blank executions, and plundering state coffers. Gota’s candidacy and Shavendra’s promotion are a mockery and insult to the mothers who have been protesting over 1000 days by roadside, day and night, in the north and east and spell dark days ahead for impunity and democratic governance for all citizens.