Stating, as set forth below, that the UN itself withheld evidence of war crimes in Sri Lanka in 2009, Inner City Press asked the panel for their thoughts on how the Human Rights Council panel will be able to prepare the report they are mandated to do, with the government refusing to give visas and trying to intimidate potential witnesses.

The moderator said this was perhaps not the place to get answers on Sri Lanka. Why not? And UN Prevention of Genocide official Adama Dieng did respond, saying it is possible to produce information in real time. 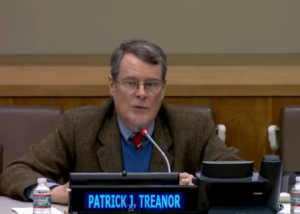 As reported by Inner City Press:

After claiming of Sri Lanka that “we don’t count bodies,” the UN has now involuntarily admitted that the “minimum number of documented civilian casualties since 20 January 2009, as of 7 March 2009 in the conflict area of Mullaitivu Region [is] 9,924 casualties including 2,683 deaths and 7,241 injuries,” in a leaked document of the Office for the Coordination of Humanitarian Affairs obtained by Inner City Press.

OCHA’s top official John Holmes, as well as spokespeople for UN Secretary General Ban Ki-moon, have repeatedly denied that the UN has such casualty figures.  Now it appears that unlike in other conflicts from Darfur to Gaza, the UN withheld the Sri Lanka figures, in effect protecting the Sri Lankan government from criticism.

On February 17, 2009, Inner City Press asked Secretary General Ban Ki-moon’s spokesperson Michele Montas for the UN’s estimate of civilian deaths, and whether it was higher or lower than 1200. Ms Montas replied that “we are trying to save people, not count bodies.” Video here, from Minute 22:48.

On March 17, 2009, Inner City Press cited the just-obtained internal OCHA casualty figure of 9,924 including 2,683 deaths to the Ambassador of a European country active with OCHA, asking if Holmes had disclosed this number in the two “classified” briefings on Sri Lanka the Ambassador had mentioned. “Everyone knows the figures are controversial,” the Ambassador said, insisting that he not be identified by name or country. “You won’t hear these figures from OCHA.” But internally, they are in writing.

And now the Sri Lankan government has predictably shot back, blaming Zeid’s statement for what they were already doing: banning the human rights investigators.

Sri Lanka’s Permanent Representative to the UN in Geneva Ravinatha Aryasinha has written to Zeid, “This type of action on your part would regrettably constrain constructive engagement which the Government of Sri Lanka has consistently sought to pursue.” Right.

In UN headquarters this is pattern used by the United Nations Correspondents Association under Giampaolo Pioli.

When Inner City Press reported as context for Pioli’s unilateral decision grant an “UNCA” screening for Sri Lanka’s war crimes denial film “Lies Agreed To” that Pioli had rented one of his Manhattan apartments to Aryashinha’s counterpart in New York Palitha Kohona, Pioli said take the story off the Internet or he would get Inner City Press thrown out of the UN.

When Inner City Press complained about this attempt at censorship, by a group that was ostensibly supposed to defend journalists and freedom of the press, these complaints including sent in writing to the private owners of Pioli’s listed employers QUOTIDIANO NAZIONALE/LA NAZIONE/Il Resto del Carlino / IL GIORNO, Poligrafici Editoriale S.p.A. via Stefania Dal Rio, and to Voice of America —

this was used as the excuse to, yes, try to get Inner City Press thrown out of the UN.  Here is Voice of America’s letter, for which it said it had the support of AFP and Reuters, which then moved to censor its own anti-Press complaint to the UN, here.

Writing to QUOTIDIANO NAZIONALE/LA NAZIONE/Il Resto del Carlino / IL GIORNO, Poligrafici Editoriale S.p.A. was said, by Voice of America, to have these companies “preparing a libel lawsuit” — never filed. It was only meant to silence and censor. And now Pioli reappears, annointed by two year figure head Pamela Falk, to take the helm again at UNCA, become not the UN Correspondents Association but rather the UN’s Censorship Alliance.

In 2009 it was Secretary General Ban Ki-moon who went on the Rajapaksas’ victory tour of the bloodbath on the beach. Some of Inner City Press’ coverage is here.

In 2011 Sri Lanka’s denial of war crimes, “Lies Agreed To,” was screened inside the UN, hosted by the then-president of UNCA, become the UN’s Censorship Alliance.

Inner City Press: In Sri Lanka, a newspaper has reported that the Government is searching people down for having “blank human right complaints forms” to the inquiry of the Human Rights Council in Geneva. And since, obviously, there are people who are now charged with this and on the run, I wanted to know: Can you state from this podium or sometime today, are there even… do such forms even exist? Is there a blank form for this inquiry? And if so–

Spokesman Dujarric: I don’t know. You may want to refer that question to the Office of the High Commissioner of Human Rights here.

Inner City Press: Okay. Even if it were to exist, should people be hunted down for having these forms?

Spokesman Dujarric: Obviously, I can’t tell you… I don’t know of the existence of these forms or whether there is a police action against it. Obviously, it’s important that people have the right to cooperate, should they wish, with any UN human rights investigation

The article is easy to find; it is in The Island, which got leaked one of Ban Ki-moon’s wan reports on Sri Lanka. But eight hours later, nothing.

In the interim, the previous president of UNCA Giampaolo Pioli, who when Inner City Press reported on his screening of Rajapaksa’s war crimes denial film and the fact that Pioli previously rented one of his apartments to Palitha Kohona, still Sri Lanka’s Ambassador, tried to get Inner City Press thrown out of the UN, made a new move.

Pioli is positioning himself to again head UNCA, posting his name as the only candidate, endorsed by Pamela Falk of CBS who filled in for his for two years. UNCA has not been reformed in any way since its kangaroo proceeding against Inner City Press resulted in death threats.

Inner City Press submitted requests under the US Freedom of Information Act to Voice of America, whose Margaret Basheer wrote at the time that the newspaper of UNCA’s president — Pioli — was preparing to sue Inner City Press for libel for the entirely true report that Pioli rented real estate to Kohona — pictured below with Pioli and Shavendra Silva.

It was pure intimidation and big media abuse, an attempt to censor. Inner City Press raised the death threats from Sri Lanka to Pioli’s private held newspaper in Italy — which allows Pioli to, for example, make campaign contributions to politicians he is supposedly covering — resulting in yet more threats of litigation, attempts to intimidate and censor. There are more more documents obtained under FOIA, and audio clips, most not yet published.

Since then, Inner City Press quit UNCA and co-founded the Free UN Coalition for Access. But Ban Ki-moon’s UN continues to prop up its UN Censorship Alliance, giving it a big room for free to hold screenings in, setting aside all first questions for it, using it to pretend to be doing a good job on press freedom and such issues as Sri Lanka war crimes. We’ll have more on this.