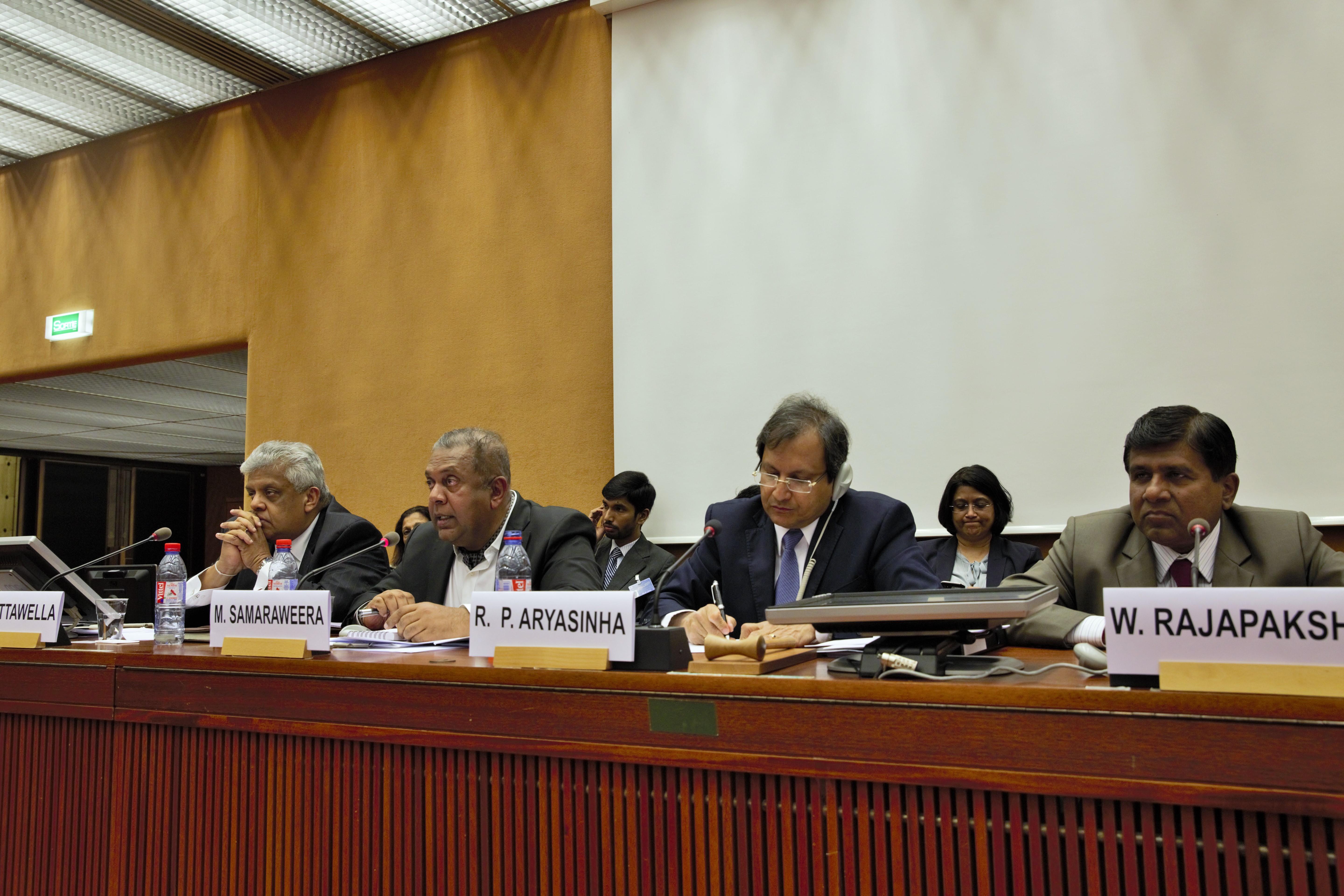 Oral Update by the United Nations High Commissioner for Human Rights on Promoting Reconciliation, Accountability and Human Rights in Sri Lanka, [and….]

ZEID RA’AD AL HUSSEIN, United Nations High Commissioner for Human Rights, noted with satisfaction that the Government of Sri Lanka had engaged with United Nations human rights mechanisms, and had taken some steps towards promoting reconciliation. The decision to sing the national anthem in both Sinhala and Tamil on Independence Day, for the first time since the early 1950s, had been a powerful gesture.  The process of constitutional reform had achieved significant momentum with the adoption of a resolution by the Parliament establishing a constitutional assembly to develop a new constitution to go to referendum in 2017.  This process presented an opportunity to rectify structural deficiencies that contributed to past human rights violations, and reinforce guarantees of non-recurrence such as strengthening civilian oversight over the military.  The High Commissioner was however concerned that the Government had not moved fast enough with tangible measures to build confidence among victims and minority communities; there were anxieties that the full promise of governance reform, transitional justice and economic revival, risked stalling or dissipating.

In the context of transitional justice, High Commissioner Zeid noted the lack of progress on the revision of the Assistance to and Protection of Victims of Crime and Witnesses Act of 2015, while the implementation of a comprehensive transitional justice agenda was hampered by a lack of clarity around responsibilities and a strategy that linked together different processes.  The High Commissioner welcomed the appointment of the Secretary-General of the Secretariat for the Coordination of the Reconciliation Mechanisms and the appointment in January 2016 of an eleven-member Task Force of prominent civil society members to conduct national consultations, and stressed the importance of ensuring the centrality of victims and those traditionally excluded, including women, in the design and implementation of transitional justice processes and mechanisms.  International participation in the accountability mechanisms, as stipulated in the Council’s resolution 30/1, would be a necessary guarantee for the credibility, independence and impartiality of the process in the eyes of victims given the magnitude and complexity of the alleged international crimes which could amount to war crimes and crimes against humanity.  A comprehensive and well-coordinated strategy on transitional justice was required for the Government to implement its commitments in Resolution 30/1, and it should be backed up by a concerted public information campaign involving civil society in the design of transitional justice mechanisms.

Sri Lanka, speaking as a concerned country, noted that it had begun taking action on all fronts related to strengthening good governance and the rule of law, promoting and protecting human rights, fostering reconciliation, and achieving economic development.  The Government had set up a Secretariat for Coordinating the Reconciliation Mechanism under the Office of the Prime Minister, a task force consisting entirely of civil society representatives to seek public views with respect to the truth seeking process, accountability and reparations mechanisms, and a Permanent and Independent Office on Missing Persons.  The Government was also working on the first draft of the new counter-terrorism legislation, and toward a new constitution, whereas a new Policy on Durable Solutions for Conflict Affected Displacement had been prepared.  The Government had clearly instructed the military that all the land obtained from civilians had to be returned by 2018 at latest.  The road ahead was challenging, but it was powered by the determination and resolve to achieve reconciliation.

Netherlands, speaking on behalf of the European Union, urged the Government of Sri Lanka to fully comply with the commitments it had made within the Human Rights Council, including those related to reconciliation, justice and accountability, and urged it to repeal the Prevention of Terrorism Act as a matter of priority.

Germany welcomed the progress made by Sri Lanka, including in drafting a new constitution, and encouraged it to tackle the remaining tasks of truth, reconciliation and guarantees of non-recurrence.

Switzerland  [said that] Sri Lanka should take immediate steps to ensure the full return of land, release prisoners and review the Protection of Witnesses Act, and should develop in a transparent manner a global reconciliation strategy.

Russian Federation welcomed the efforts of Sri Lanka in the area of national reconciliation and noted new measures adopted by Colombo.  A constructive approach testified to the country’s willingness to solve the problems.  Concerning international technical assistance, Sri Lanka must determine, without outside pressure, what assistance it needed and in which areas.  The process of national reconciliation must be carried out by Sri Lankans.

United Kingdom welcomed the Sri Lankan Government’s continuing determination to address the legacy of conflict through the implementation of resolution 30/1.  It welcomed progress the country had made, for instance in initiating a process of constitutional reform, but much remained to be done, such as repealing the Prevention of Terrorism Act as soon as possible.

The former Yugoslav Republic of Macedonia welcomed the progress achieved by Sri Lanka in the constitutional reform process.  The Government was encouraged to accelerate credible investigations and seek justice regarding the violations of human rights, with appropriate forms of international support and involvement in accordance with the relevant paragraphs of resolution 30/1.  The Government was further urged to advance the processes of accountability and reconciliation.

Republic of Korea appreciated the efforts of the Government of Sri Lanka to conform to the expectations of the international community, such as the decision to ratify the Convention against Enforced Disappearances and the Convention on the Rights of Persons with Disabilities.

Ghana welcomed the fact that Sri Lanka had extended an invitation to all Special Procedure mandate holders, as well as steps taken to ratify and implement key human rights instruments.  Ghana remained concerned that the Government had not yet addressed issues related to the release of land and detainees, the revision of the Prevention of Torture Act and the witness protection laws.  It urged the Government of Sri Lanka to bring all perpetrators to justice.

Norway noted with appreciation Sri Lankan officials’ announcement last week of seriously considering the abolition of the death penalty in the new constitution.  All initiatives for reconciliation, accountability and human rights in Sri Lanka should continue to be based on inclusive consultations with victims, civil society and the general population.

Japan stressed the importance of ensuring that the Government’s initiatives were carried out with the involvement of the people of Sri Lanka, and noted Japan’s readiness to extend continuous support toward reconciliation, including through technical cooperation by a Japanese former international judge.

Australia welcomed Sri Lanka’s commitment to implement last September’s resolution and recognized its positive engagement with the United Nations, establishment of an Office of Missing Persons and some progress on land releases.

Pakistan appreciated the strong and positive commitment of Sri Lanka for the promotion and protection of all human rights.  Its openness and willingness to discuss all matters had been amply shown during the High Commissioner’s visit.  It welcomed the specific actions taken by the Government and Pakistan understood that that path was not easy and that it required time, patience and resources.

Denmark welcomed Sri Lanka’s determination in moving forward on the path to reconciliation, justice and human rights, as well as its increased cooperation with United Nations human rights mechanisms.  Denmark urged the Government to stay firm on this path by ensuring a solid and credible justice process with effective witness protection and support from the international community.  Protecting human rights, especially in the north and east of Sri Lanka, was central in this post-conflict context.

Canada welcomed Sri Lanka’s initial steps towards reconciliation and accountability.  More, however, remained to be accomplished, including the establishment of a credible and independent monitoring mechanism allowing for meaningful international involvement.

New Zealand commended Sri Lanka’s constructive approach towards reconciliation and accountability, and encouraged it to implement related mechanisms in a credible, effective and achievable way.

Estonia noted the positive steps taken by Sri Lanka toward reconciliation, and urged the country to further promote it on an institutional level.  The Government of Sri Lanka was encouraged to maximise the involvement of civil society in the current consultation process to ensure meaningful input into the design of transitional justice mechanisms.  It was further urged to address human rights violations, including sexual violence, disappearances and arbitrary detentions.

Ireland said that given its own national history, Ireland knew reconciliation could take time.  The Sri Lankan Government was urged to ensure the inclusive implementation of commitments under resolution 30/1, and also to repeal the terrorism act.

International Movement against All Forms of Discrimination and Racism, noted the slow progress in returning land in Sri Lanka, failure to facilitate the security sector reform, the continuing culture of impunity and surveillance, the existence of the draconian Prevention of Terrorism Act, harassment of Tamils returning home, the delay in releasing political prisoners, and the failure to initiate a public campaign to support the transitional justice process.

Society for Development and Community Empowerment expressed concerns about abuses against the Tamil population in Sri Lanka, and about the situation of Tamil refugees, issues which were not appropriately addressed in the draft Human Rights Council resolution.  Failing to address racial discrimination against Tamils would perpetuate the situation and the genocidal risk they faced.

Association Bharati Centre Culturel Franco-Tamoul said that the Government of Sri Lanka had backtracked from its commitment to include international judges in its accountability efforts.  Furthermore, violations continued in Sri Lanka, including land grabbing and arbitrary arrests under the Prevention of Terrorism Act.  On the political solution front, the Government kept on insisting that the solution would be within a unitary State, in continuation of the past.