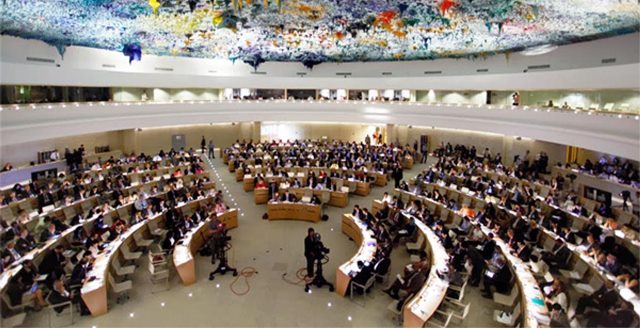 Not a single country in the like minded group countries that supported Sri Lanka at the 27th session of the HRC cosponsored this resolution.

Bearing in mind that impunity for attacks and violence against journalists constitutes one of the main challenges to strengthening the protection of journalists, and emphasizing that ensuring accountability for crimes committed against journalists is a key element in preventing future attacks the resolution:

1. Condemns unequivocally all attacks and violence against journalists and media workers, such as torture, extrajudicial killings, enforced disappearances and arbitrary detention, and intimidation and harassment in both conflict and non-conflict situations;

2. Strongly condemns the prevailing impunity for attacks and violence against journalists, and expresses grave concern that the vast majority of these crimes go unpunished, which in turn contributes to the recurrence of these crimes;

3. Urges States to promote a safe and enabling environment for journalists to perform their work independently and without undue interference, to prevent attacks and violence against journalists and media workers, to ensure accountability through the conduct of impartial, speedy, thorough, independent and effective investigations into all alleged violence against journalists and media workers falling within their jurisdiction, to bring perpetrators including, inter alia, those who command, conspire to commit, aid and abet or cover up such crimes to justice, and to ensure that victims and their families have access to appropriate remedies;

5. Calls upon States to develop and implement strategies for combating impunity for attacks and violence against journalists, including by using, where appropriate, good practices such as those identified during the panel discussion held on 11 June 2014 and/or compiled in the report of the Office of the United Nations High Commissioner for Human Rights on good practice on the safety of journalists, inter alia:

(a) The creation of special investigative units or independent commissions;
(b) The appointment of a specialized prosecutor;
(c) The adoption of specific protocols and methods of investigation and prosecution;
(d) The training of prosecutors and judiciary regarding the safety of journalists;
(e) The establishment of information-gathering mechanisms, such as databases, to permit the gathering of verified information about threats and attacks against journalists;
(f) The establishment of an early warning and rapid response mechanism to give journalists, when threatened, immediate access to the authorities and protective measures;

6. Emphasizes the important role that media organizations can play in providing adequate safety, risk awareness, digital security and self-protection training and guidance to employees, along with protective equipment, where necessary;

7. Welcomes the proclamation by the General Assembly, in its resolution 68/163, of 2 November as the International Day to End Impunity for Crimes against Journalists;

8. Stresses the need to ensure better cooperation and coordination at the international level, including through technical assistance and capacity-building, with regard to ensuring the safety of journalists, including with regional organizations, and invites United Nations agencies, funds and programmes, other international and regional organizations, Member States and all relevant stakeholders, when applicable and in the scope of their mandates, to cooperate further in the implementation of the United Nations Plan of Action on the Safety of Journalists and the Issue of Impunity, and to this end also calls upon States to cooperate with relevant United Nations entities, in particular the United Nations Educational, Scientific and Cultural Organization, as well as international and regional human rights mechanisms, and to share information on a voluntary basis on the status of investigations into attacks and violence against journalists;

9. Acknowledges the importance of addressing the issue of the safety of journalists through the process of the universal periodic review;

10. Encourages national, subregional, regional and international human rights mechanisms and bodies, including the relevant special procedures of the Human Rights Council, treaty bodies and national human rights institutions, in the framework of their mandates, to continue to address the relevant aspects of the safety of journalists in their work;

11. Decides to continue its consideration of the safety of journalists in accordance with its programme of work, no later than at its thirty-third session.