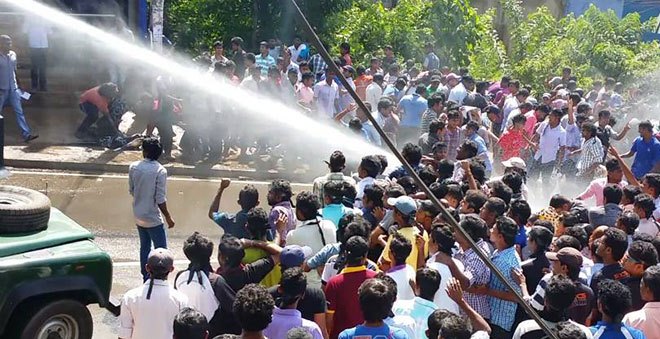 Water cannons were used against a student protest against the opening of a sub-standard hostel by the Higher Education Minister in the University of Sabaragamuwa.alt

Higher Education Minister has arrived in the University today (5) to open a new hostel. However, the students have protested his arrival claiming the Minister will not be allowed to enter into the university since real solutions are not given to students’ problems.

The Minister has responded to the students’ objection by unleashing water cannons on them and assaulting students in order to enter into the university. Students have not participated in the function to open the hostel and the Minister has chastised the authorities and ordered them not repair the hostel’s faults.

S.B.Dissanayake, the Higher Education Minister of Sri Lanka, has made it his duty to bring forth neoliberal economic reforms into education by privatizing higher education. In 2010 he announced that private universities will be established in the country even if he had to put 1000 students out of universities. Since then more than 1500 students have been suspended from the university and between 2010 and 2013 74 students have been arrested.

Sri Lankan government has made privatization of education its policy on education and Minister S.B.Dissanayaka is determined to proceed with that project.

Meanwhile a Tamil student of University of Sabaragamuwa is being held in the Terrorist Investigation Division under anti-terrorist laws, under false allegations of inciting racial disharmony. Students are of the opinion that the government is trying to use racism to divide students in order to bring forth neoliberal economic reforms.
Lanka Views