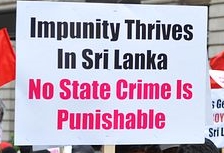 The Foreign Secretary told the media at the President’s Media Centre last week that they were approached by Germany, a member of the Core-Group, to get the consent of the Government to agree on a consensus resolution to be moved at the UNHRC in September this year.

The Government has rejected the offer, citing that such endeavours would fail without the blessings of the people.

“The former Government supported a consensus resolution in 2015 and was rejected by the people at the next election. We would be committing the same mistake if we endorse a similar move,” he said. The Government has conveyed this to the Core-Group. Resolution 46/1 of March 23, 2021 which mandated an evidence gathering mechanism permitting Human Rights High Commissioner Michelle Bachelet to collect evidence on past human rights violations in Sri Lanka, will expire at the 51st session of the UNHRC in September. A new resolution is expected to be tabled by the Core-group replacing the current resolution, if the period of implementation of the 46/1 is not extended by the HRC.

The Council approved a whopping US $ 2.8 million budget for this mechanism. However, a limited portion of it has been released so far while the Government protested that the huge fund for the salaries and other expenses of this mechanism showed the undue emphasis this case has been given when matters of a more serious nature were happening around the world.

Bachelet is required to submit a comprehensive report that includes ‘further options to advance accountability’ in Sri Lanka at the September session.

“We need to end this unfair process. We were a victim of terrorism not a perpetrator,” Foreign Secretary Colombage said. The Sri Lankan delegation to Geneva held a meeting with the President of the UNHRC, Argentina’s Envoy to the UN in Geneva Federico Villegas, to brief him of the progress Sri Lanka had made so far and the disproportionality with which the country’s case has been handled by the Council.

Argentina’s Envoy had agreed to discuss a future course of action to end this incessant process.

“We are in discussion with member states and the Core group to stop any new detrimental resolutions at the Human Rights Council,” Colombage said, adding that they are hopeful that many member states will support Sri Lanka’s case. Of the 45 member countries which spoke at the recent interactive session, 31 spoke in favour of Sri Lanka highlighting the progress it has made in fulfilling international obligations. The countries which are usually critical of Sri Lanka, had also acknowledged the progress the country had made on the ground, despite challenges posed by the Covid-19 pandemic.

He said the Government has embarked on a roadmap to prepare for the crucial 51st HRC session. This roadmap will have clear timelines to fulfill certain commitments before September.