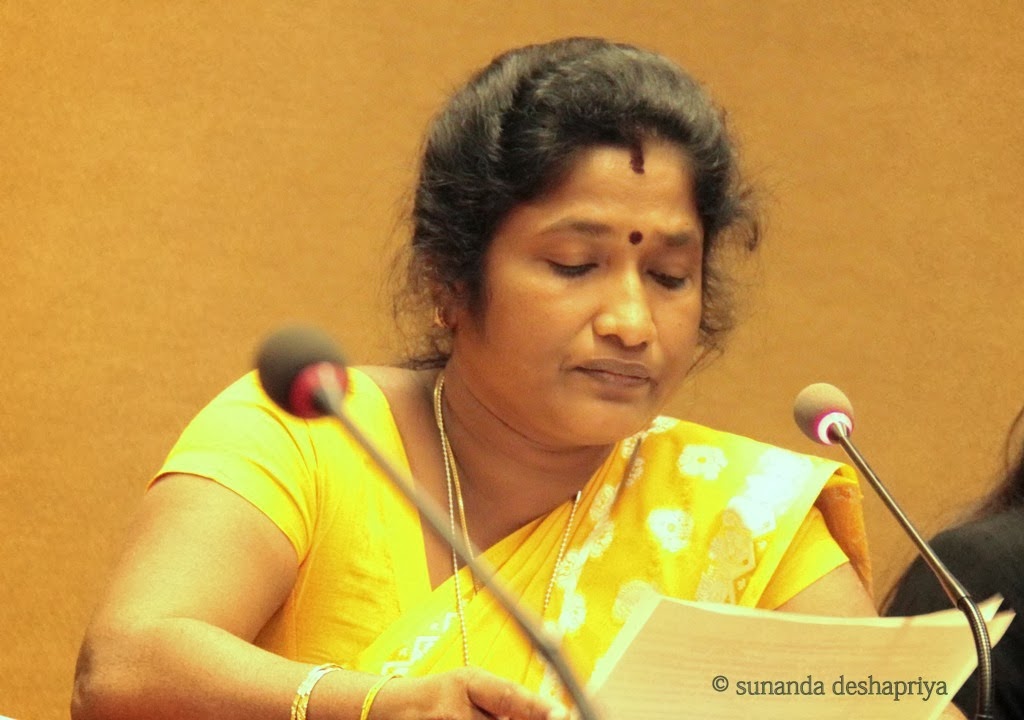 Making a statement from the floor  at the side event  on 11 March 2013  at the UNHRC Ms. Ananthi Sasitharan a TNA member of the Northen provincial council callled for a Internationa Investigation and comprehensive political solution. The side event was chaired by David Whaley and the side event was organised by the International Movement Against all forms of Discrimination and Racism. Her statement follows:
“My name is Ananthi Sasitharan, I am an elected Member of Northern Provincial Council in Sri Lanka. I am here today in front of you as a voice of the oppressed Tamil people in Sri Lanka, and I speak on behalf of thousands of Tamil people that surrendered as individuals and as families to the Sri Lankan government.
Myself and others have filed cases habeas-corpus and continue to receive no justice for the thousands of people that were put in Sri Lankan custody.
Our homeland is completely occupied by the military, that are almost entirely Sinhalese. At any event, the army is there and people are afraid by the army presence – too afraid to talk or do anything. All our native lands are in their hands, as they have occupied everything.
In the North-East, there are a huge number of relatives of missing people; not just of those that disappeared during the war, because even today people are disappearing.
On top of the missing, there are Tamil political prisoners that have been in captivity for many years and there have been no meaningful steps taken towards their release if there is something called hell, it is in the Sri Lankan state prisons.
This means that today the military can carry out violence against Tamil women. Every day we hear stories of abuse and sexual assault against Tamil women and girls.
There have also been many reports that the government is forcing Tamil women into getting birth control. At the same time, the Sinhala military is encouraged to have more children. The government is trying to change the ethnic make up of the island.
The government is trying to systematically destroy the Tamil nation. They are destroying its culture, politics economy and society.
65 years of injustice and violence by successive governments of Sri Lanka have made it clear to us that neither justice or a political-solution can be achieved without the action of the International Community and the UN.
Sri Lanka has done nothing towards reconciliation and the root causes of the conflict remain unresolved. The Sri Lankan state is conducting: land grabs amounting to demographic changes, military occupation, coercive birth control methods, torture of political prisoners and other ongoing human rights violations. All of this is aimed at breaking down the Tamil nation. They are using these methods to carry out a genocide of our people.
In 2009 me and my daughters surrendered my husband to the Sri Lankan government on the 18th May 2009 in Mullaitheevu after they announced that they would provide amnesty to former Tamil political leaders. To this day I am searching for my husband.
On behalf of the oppressed Tamil people I plead for an independent international investigative mechanism in the form of Commission of Inquiry, to investigate all the violations and crimes committed against the Tamil people before, during, and after the war.
I plead with you to include a call for finding a political solution that addresses the root causes of the conflict and human rights violations.”
Share
Facebook
Twitter
WhatsApp
Pinterest
Email