HRC resolution: “Participation’ of foreign and Commonwealth judges” is not a hybrid court, says Sri Lanka 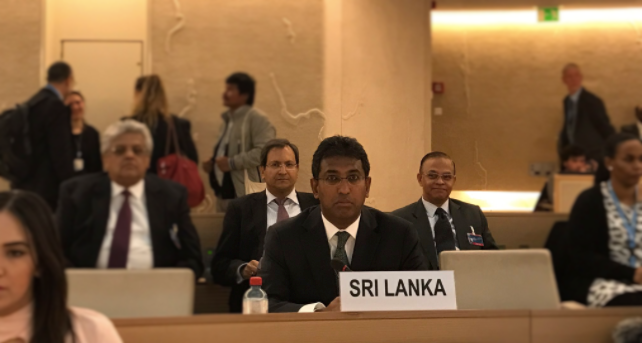 This what he has told the Sunday Observer:

“What the President and the Prime Minister and also the Foreign Minister have said is, that is NOT the case. There won’t be any hybrid court for several reasons, but, from a legal and technical perspective, because the Sri Lanka Constitution does not allow foreign judges to sit in judgment; in other words ‘participation’ cannot mean ‘hybrid’. Surely, it is not something that difficult to understand.”

“It is in this context that the word ‘participation’ takes shape. It can mean ‘expertise’ or ‘observation’ or any such other, but NOT hearing cases. During MR’s time as well there were instances, including where the Indian Chief Justice Bhagwati also was involved in both ‘expertise’ and ‘observation’. There are several other examples including Darusman, the former Attorney General of Indonesia.”

“So, it is only to mislead the people that certain elements will use the word ‘participation’ to mean ‘sitting in judgement’ in a ‘hybrid court’ to suit their narrow political agendas. I urge the public not to be misled.”

“Plus, there are many other more important things. A compassionate council on a truth mechanism might be something that can deal with all these issues, instead of courts. The Missing Persons Office has already been legislated. Handing back private land is continuing. All these are what we should focus on.”

The news paper has added its  own explanation of  what the minister has said.

What the Deputy Foreign Affairs Minister makes clear is that Sri Lanka will not be able to completely rule out foreign judges and prosecutors in its war crimes investigation and prosecution. What can be negotiated, however, is the level of their engagement.

The differences over the involvement of foreign judges aside, the Sri Lankan government will have to take meaningful steps in the direction of accountability and reconciliation within the next two years, which includes the establishment of the Truth and Reconciliation Commission and the Office of Missing Persons.

While ensuring a credible mechanism locally, the government will have to communicate its position on hybrid courts to the international community, including the member nations of the UNHRC, in a convincing manner. The success of this attempt will also hinge on Sri Lanka’s ability to ensure independence and impartiality of the judiciary, especially, when it comes to cases involving the military.

It is a widely-held perception, especially, in the international domain, that the cases involving the military are not heard objectively and impartially in the Sri Lankan judiciary due to various sensitivities involving the war heroes. While the government is sensitive about political repercussions of such cases, the opposition tries its best to politicize these issues and achieve petty political gains. This hampers Sri Lanka’s plans for a Sri Lanka-led credible war crimes investigation mechanism.

One such example was the case involving Sunil Ratnayake, a former staff sergeant attached to the Sri Lanka Army, who was found guilty for the murder of eight Tamil civilians in Mirusuvil, Jaffna in 2000. The Colombo High Court sentenced him to death after a 13-year-trial.