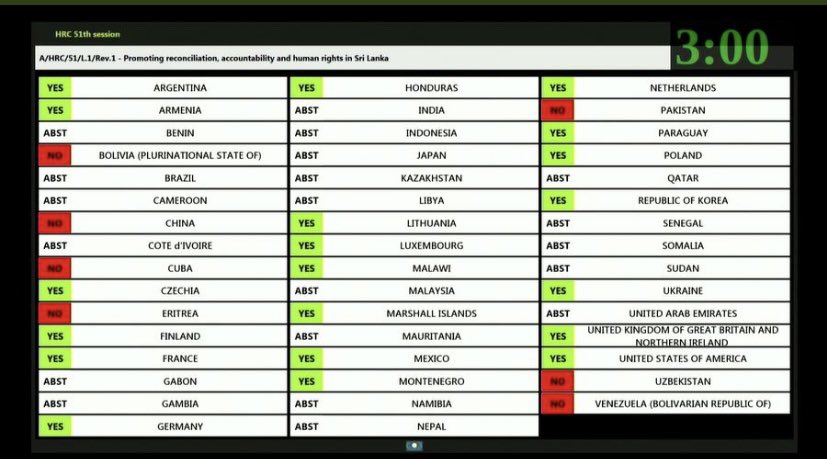 The full text of the resolution follows:

Guided by the purposes and principles of the Charter of the United Nations, reaffirming the Universal Declaration of Human Rights, and recalling the International Covenants on Human Rights and other relevant instruments,

Recalling further that, in its resolution S-11/1 of 27 May 2009, the Human Rights Council welcomed the resolve of Sri Lanka to begin a broader dialogue with all parties in order to seek a political settlement and to bring about lasting peace and development in Sri Lanka based on consensus among and respect for the rights of those from all ethnic and religious groups, and endorsed the joint communiqué of 26 May 2009 of the President of Sri Lanka and the Secretary-General, in which the Secretary-General, inter alia, underlined the importance of an accountability process for addressing violations of international humanitarian law and human rights law,

Reaffirming its commitment to the sovereignty, independence, unity and territorial integrity of Sri Lanka,

Reaffirming also that it is the primary responsibility of each State to respect human rights and to ensure the full enjoyment of all human rights and fundamental freedoms by its entire population,

Recognizing the severe economic crisis that has deteriorated in Sri Lanka since late 2021, exacerbated by the coronavirus disease (COVID-19) pandemic, and the profound impact that this has had on the people of Sri Lanka, including women-led households,

Underscoring the importance of addressing the underlying governance factors and root causes that have contributed to that crisis, including deepening militarization, lack of accountability in governance and impunity for serious human rights violations and abuses, which remains a central obstacle to the rule of law, reconciliation and sustainable peace and development in Sri Lanka,

Recognizing the recent efforts of the Government of Sri Lanka to address the ongoing economic crisis, and welcoming the staff-level agreement reached between the Government and the International Monetary Fund,

Emphasizing that peaceful protests can make a positive contribution to the development, strengthening and effectiveness of democratic systems and to democratic processes, including elections and referendums, as well as to the rule of law, and stressing the importance of full respect for the freedom to seek, receive and impart information, including the fundamental importance of access to information, and for democratic participation, transparency and accountability, and of combating corruption,

Reaffirming that all individuals in Sri Lanka are entitled to the full enjoyment of their human rights without distinction of any kind such as religion, belief or ethnic origin, and the importance of a peaceful and unified land to the enjoyment of human rights,

Acknowledging the progress made by the Government of Sri Lanka in rebuilding infrastructure, demining, land return, facilitating the voluntary resettlement of internally displaced persons and improving livelihoods, and encouraging further efforts in these areas,

Welcoming the continued commitment of the Government of Sri Lanka to remain engaged with the United Nations and its agencies, including human rights mandates and mechanisms, in capacity-building and technical assistance, and to achieve sustainable peace,

Reaffirming its unequivocal condemnation of all acts, methods and practices of terrorism, including those committed in Sri Lanka in April 2019 that led to a large number of injuries and deaths, and reaffirming also that all measures taken to combat terrorism must comply fully with States’ obligations under international law, in particular international human rights law, and, as applicable, international refugee law and international humanitarian law,

Emphasizing the importance of a comprehensive approach to dealing with the past, incorporating judicial and non-judicial measures, to ensure accountability, to serve justice, to provide remedies to victims, to avoid the recurrence of violations of human rights and to promote healing and reconciliation,

Recognizing that mechanisms to redress past abuses and violations work best when they are independent, impartial and transparent, and use consultative and participatory methods that include the views of all relevant stakeholders, including, but not limited to, victims, women, youth, representatives of various religions, ethnicities and geographic locations, as well as people from marginalized groups,

Noting with appreciation the work of the Office of the United Nations High Commissioner for Human Rights towards the promotion and protection of human rights and truth, justice, reconciliation and accountability in Sri Lanka,

*    State not a member of the Human Rights Council.