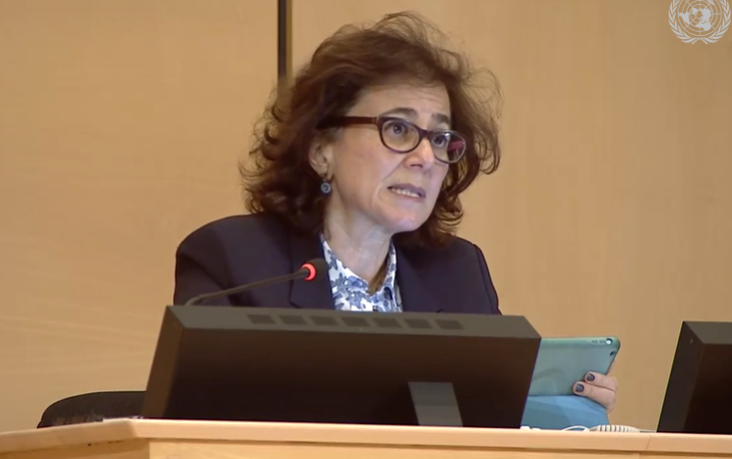 International Movement Against All forms Discrimination and of Racism said that human rights in Sri Lanka are now threatened by the centralisation of executive powers and weakening of the independence of the judiciary and key commissions including the Human Rights Commission and the Office on Missing Persons (OMP).

“This Council must stay alert to appointments of OMP commissioners once the current members finish their mandate this week.

The report of the Presidential Commission of Inquiry on “political victimisation” threatens the democratic fabric of the country which includes recommendations to take legal actions against those pursued human rights investigations. This is a direct threat to human rights defenders, victims and witnesses. It heightens fear of reprisal and brings back memories of the past.

While we have continuously called for an international accountability mechanism on Sri Lanka, we support the High Commissioner’s recommendations and urge the Human Rights Council to give monitoring and evidence-gathering mandates to the OHCHR.”

Asian Forum for Human Rights and Development said that International accountability is the only way forward for Sri Lanka.

“FORUM-ASIA welcomes the High Commissioner’s report and echoes her concerns on the situation in Sri Lanka.

Systematic surveillance and harassment of human rights defenders, civil society, journalists, victims and their families, in particular those who advocate for international accountability for past violations, have escalated in the past year.

The 20th Amendment to the Constitution which undermines the independence of the judiciary and democratic institutions such as the Human Rights Commission of Sri Lanka and removes institutional checks and balances has accelerated Sri Lanka’s descent towards authoritarianism.

The government has actively obstructed investigations into past violations and demonstrated it has no intention of pursuing accountability. Any hope of justice for thousands of victims and survivors as well as prevention of further deterioration in Sri Lanka depends on the Council’s principled action based on the High Commissioner’s recommendations.

International accountability is the only way forward for Sri Lanka.”

ICJ calls for enhanced monitoring and reporting on the ground situation

International Committee of Jurists said that ” It  has continuously observed that Sri Lanka’s incapacity and unwillingness to pursue accountability for crimes under international law is deep-rooted and longstanding.”

The ICJ has continuously observed that Sri Lanka’s incapacity and unwillingness to pursue accountability for crimes under international law is deep-rooted and longstanding.

The extensive militarization of civilian functions, the reversal of constitutional safeguards, the obstruction of the rare cases of domestic criminal accountability and the deteriorating human rights situation all point to a systemic culture of impunity that will only worsen in the years to come.

The rights of the victims of human rights violations cannot be ignored any longer.

We further call for enhanced monitoring and reporting on the ground situation and for the establishment of a mechanism for the collection and preservation of evidence for future prosecution.”

Reneging on its international commitments has put any prospect of justice, truth and reparations in Sri Lanka at grave risk. This has been compounded by an escalation of attacks against civil society over the last months, particularly against groups and people working to further human rights.

As civic space has been squeezed tighter under the Rajapaksa administration, human rights lawyers, activists and academics have been targeted with arrests, intimidation or threats for speaking up. Independent NGOs are increasingly being silenced as the administration has sought to restrict them. With NGOs who document, monitor and report on past and current rights violations raided and attacked, it is abundantly clear that much-publicized national accountability processes are as such in name only.

The Human Rights Council once again has opportunity not only to secure justice and accountability for past crimes, but to protect those on the ground who are being subjected to human rights violations now, and those at risk – a risk increased by ongoing impunity – of further violations in the future. Warnings of a deteriorating human rights situation have been given by human rights defenders, by journalists, by Special Rapporteurs, by the High Commissioner. The Council must take action to ensure heightened scrutiny on Sri Lanka, including adopting a resolution mandating enhanced monitoring and other necessary steps towards furthering accountability.

We share deep concern over “clear early warning signs of a deteriorating human rights situation and a significantly heightened risk of future violations.” Last week, Amnesty International released a report detailing the significant crackdown on civil society and freedom of expression, and the resulting climate of fear; and share concerns over increased repression and marginalisation of minorities.

The report before us today, as well as a recent joint assessment by UN Special Procedures,
reinforces our own assessment that domestic accountability measures cannot be considered credible, given the repeated failure of such processes to yield results, recent backsliding on important emblematic cases, changes to the Constitution that seriously erode the independence of domestic justice processes and the National Human Rights Commission, and the real fear of reprisals against victims and witnesses. This Council must redouble its efforts to help end the cycle of impunity which continues to fuel violations and to deny victims’ and their families’ right to truth, justice and reparation.

It is critical that the UN learn from past failures – including in Sri Lanka – and ensure that the clear early warning signals indicated by the High Commissioner are responded to. In this context, we urge this Council to take the “preventive actions” recommended by the High Commissioner: specifically, to mandate enhanced monitoring and reporting on the situation; and the collection and preservation of evidence for future prosecutions.
Read the full statement:ID on SL HRC 46 – AI

No-one can seriously believe the government has any intention of pursuing justice. – HRW

For nearly a decade this Council has engaged Sri Lanka, including landmark consensus resolutions since 2015 to support a national process of accountability and reconciliation. Last year, soon after Gotabaya Rajapaksa was elected president, the Sri Lankan government renounced those commitments. It has repeatedly shown bad faith, appointing those implicated in war crimes to positions of authority. It has pardoned one of the only few soldiers ever convicted by a national court for the massacre of civilians. It has denied security force intimidation of victim groups and activists bravely engaging with this Council, and adopted discriminatory policies against the Tamil and Muslim minority communities.

Sri Lanka has announced yet another commission of inquiry in an apparent attempt to mislead the Council that a viable domestic process exists. Seventeen Special Procedures recently pointed out that Sri Lanka has a long history of commissions of inquiry “established to deflect international pressure, …[which] have been strongly criticized for their weak mandates, lack of independence, lack of resources, procedural opacity, poor collaboration from the government, … and the overall lack of implementation of their recommendations.”

Just this week, the Foreign Minister addressed the Council, denying international crimes, rejecting the Council’s resolutions, and dismissing the High Commissioner’s report as a “propaganda campaign.” No-one can seriously believe the government has any intention of pursuing justice.

The High Commissioner, in her devastating report, rightly characterized Sri Lanka as being “in a state of denial,” unable and unwilling to address its past, with direct impact on its present and future.

Now activists, victim families, even those Sri Lankan officials who have sought justice, are at risk. Lawyers have been arbitrarily detained. Protesters calling for this Council to take action have been summoned by the police.

The Council should give effect to the High Commissioner’s recommendations by advancing international accountability for grave crimes and acting to prevent further abuses.